Barca the best? No way, Jose. 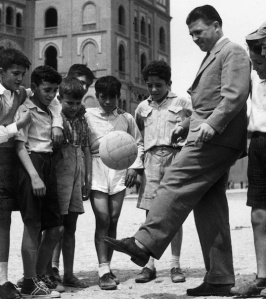 “Now pay attention lads, this is how we did it against England in ’53” – Ferenc Puskas explains how, when he was Hungarian, he set Wembley alight.

It’s hard to compare apples with pears, so selecting the greatest all-time European club side is always going to be difficult. But talk of the current Barcelona side being the best of all-time is a little premature and also a little short-sighted. Only when that team has been dismantled – and the resignation of Pep Guardiola today may be the first step in that process – can you assess where that team sits in the panthenon of the game.

A team can only beat the opposition it has today – it cannot beat teams from the past or the future. As far as that goes, Barcelona have certainly proved they were the best over a two-to-three year period. But this team will not win a hat-trick of Champions League titles – by the time the chance to notch up a third consecutive title comes, the current team will not be the current team. Barca won it in 2010 and 2011, but they fell at the semi-final stage in 2012. 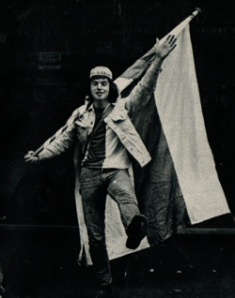 An Ajax fan heralds the birth of “total football” – Wembley 1971, the start of Dutch dominance.

Furthermore, Guardiola’s Barca won La Liga in 2009, 2010 and 2011, but they have almost certainly lost the title to Real Madrid in 2012. It could be that their coach is bowing out because the era is ending. His timing is perfect – you can just see the Abramovich yacht coming into Barcelona’s harbor now.

So where does Guardiola’s all-conquering team rank alongside some of the great teams of the past? It is star-studded – the core of the World Champions, after all. Messi, Fabregas, Villa, Iniesta, Pique, Puyol, Alves – these are all household names.

Let’s say that Barca are close to, but not quite, the best. Three teams have better records: Ajax (1970-73), the Real Madrid side – Puskas, Di Stefano and co. – that dominated Europe for years and the Liverpool team that won four European Cups between 1977 and 1984. Barca may well overtake these teams, but at the moment, they are “work in progress”.

World’s best? Messi still has to do it on the big stage.

People are too easily seduced by what they see in front of them – they often don’t have long enough memories. And as the number of people who remember football from the 1950s and 1960s (even the 1970s) declines annually, memories of Di Stefano, Puskas, Cruyff, the Lisbon Lions and Beckenbauer will rapidly fade.  Fortunately, we have the data, images and footage to provide testimony of their greatness.  One day, the Barcelona of 2008-11 will be placed alongside them.