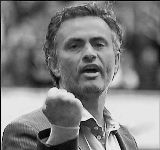 There are rumblings from Madrid that all is not well in the Bernabeu dugout. Jose Mourinho, despite winning La Liga and building a team that knocked the highly eulogized Barcelona off the top, was not named coach of the year in Spain. And the jewel in the Chamartin crown, Cristiano Ronaldo, was also snubbed in the annual awards which has also upset the Portuguese contingent at Real.

Mourinho is under contract at Real until 2016, but the smart money is on him departing before that date. Real Madrid have had 25 head coaches in 25 years, so Jose has already outstayed the average. He may also be unhappy that the Bernabeu crowd whistled at him this weekend, providing him with a reminder that no coach is bigger than the club.

Mourinho was definitely philosophical about the whistling, preferring to highlight the Real crowd as fickle. “It didn’t happen at Chelsea  (they will soon start chanting his name at Stamford Bridge as the first seams of RDM’s reign start to unpick), at Porto or at Inter. If they whistled at Zidane, if they whistled the other Ronaldo, if they whistled Cristiano Ronaldo, why are they not going to whistle me?”

His record at Real is impressive – 102 wins in 136 games and just 15 defeats since May 31 2010. But that counts for little at Real as good coaches have come and gone, often with decent records. Expectation is such that Mourinho will be expected to lift the Champions League this year and if he doesn’t, he may be shown the door.

The Real Madrid directors have a massive tool in the home crowd. Cristiano Ronaldo, despite scoring for fun, still has his detractors. He’s currently awaiting a new contract and with the tax laws changing in Spain, he’s set to cost Real a lot more than he would have a year or two ago. The Bernabeu faithful are with the club on this, rather than the player, and I guess that goes down well with the suits.

It is not beyond the realms of possibility that both Portuguese will be heading out of Spain and already, the rumours are flying around.

Although many people expect Guardiola to be waiting stage left for the demise of Roberto Di Matteo at Chelsea, Mourinho could still be on for a return to the Bridge. There’s unfinished work at Chelsea for Mourinho but the question is – have the wounds healed? Both Manchester clubs may welcome him, but it is hard to see him at Old Trafford. It’s arguably Chelsea or City.

Real Madrid should ease through to the latter stages of the Champions League and they will be in contention. The body language suggests, however, that the relationship is starting to wind-down and given Mourinho does not stay anywhere too long, (Porto 127 games; Chelsea 185; Inter 108; Real 136), the next challenge may not be too far away. Did he buy a return to Manchester?