Brondby: The decline and fall of the boys from the western outskirts 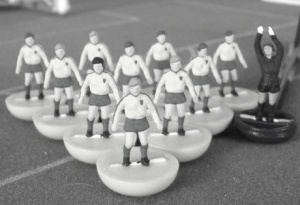 Danish subbuteo will be devastated if Brondby go to the wall

Ten years ago, if you asked anyone vaguely interested in football to name a top Danish side, the answer would have been “Brondby”. But today, the club that spawned dozens of top players was brought to the brink of bankruptcy. These are troubled times for the team from the west side of Copenhagen who are now living in the shadows of FC Kobenhavn and sit at the bottom of the Danish Superliga.

What has gone wrong at Brondby? They were seen as a go-ahead club that gave Danish football a new, fresh and professional image in the 1980s and 1990s. Most of the top Danish internationals played for the club – Peter Schmeichel (before he went to Manchester United), the Laudrups (Brian and Michael), John Jensen (!), Kim Vilfort, Marc Reiper and so on and so forth.

I was fortunate enough to visit Brondby when the club was in its pomp, interviewing Vilfort – just days after he had scored Denmark’s clinching goal in the 1992 European Championship final. Brondby was to Denmark what Liverpool meant to England in the 1980s. There was a “Brondby family” feel to the club. Footballing royalty like the Laudrups (their father was also ex-Brondby), Morten Olsen, Ebbe Skovdahl and Denmark captain Lars Olsen roamed the corridors of the club.

It’s not the first time that Brondby have been in financial trouble. They were the first Danish club to be fully professional and the first to launch on the stock exchange. They flew a little too high in the very early 1990s, diversifying so much that they went out to buy a bank. That almost ruined the club, but they got through it and enjoyed a purple patch in the mid-1990s, winning the Superliga three times between 1996 and 1998. Since then, they have won the Superliga twice – 2002 and 2005.

They were replaced as the leading light in Denmark by FC Kobenhavn (FCK), who have won the title eight times in 12 seasons. If anyone has cash in Danish football it’s FCK and they also have the pleasure of playing in the national stadium, The Parken.

Brondby have been a shade unlucky with their finances, with a major backer getting into trouble and other sponsors failing to pay-up. The club is owed money and doesn’t have a major sponsor, all of which makes it hard for them to keep up with FCK, “The City’s Club”.

After a turbulent few weeks, during which the club announced stringent pay cuts, Brondby seem to have secured their immediate future. On February 4, the club’s shares were suspended, which raised fears that they were going under. In Denmark, that could mean relegation to non-league football (Denmark Series), something that happened to pre-WW2 favourite Frem Copenhagen.

Brondby’s answer to their problems is to launch a new share issue in the spring, which is expected to raise between DKK 75m and DKK 150m. Hopefully, that will ensure that the bold and brash club from the suburbs can get back on track. If not, Brondby’s noisy fans will have to get used to lining up against the likes of Greve, Gentofte and Herlev. For a team that has rubbed shoulders with Roma, Liverpool and other European names, that would be hard to take.