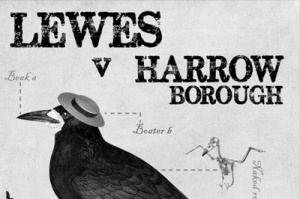 The imaginative men from the Dripping Pan

Lewes Football Club have long been at the forefront of creative use of the matchday poster, and this is, at last, receiving national recognition.

The Sussex club refuses to adopt a uniform approach to its visual identity, but it is the imaginative use of iconography that has become Lewes’ instantly recognizable calling card.

This week’s Observer newspaper pays tribute to a club that has certainly “pushed the envelope” when it comes to creating an eye-catching poster.

But then, Lewes is no ordinary club. It has been fan-owned since July 2010 and among the shareholders is Charles Saatchi, Nigella Lawson and Steve Coogan.

Some of the images used to promote their games have been controversial. On Mother’s Day, the club called on an old Russian poster espousing the virtues of “Mother Russia”. The Sex Pistols, Toulouse-Lautrec and Alfred Hitchock have all been aped at some point.

On the pitch, Lewes have not been so inventive. After reaching the Conference National in 2008, they have experienced two relegations and are currently struggling in the Ryman Premier. But you can’t fault their creativity off the field of play….