Kick-off 2013-14: Anniversary games a timely reminder of the League’s roots

John Goodall was the League’s first sharpshooter – despite playing in a nice velvet cap….

This weekend, the Football League kicks-off a campaign that marks the 125th anniversary of the first ever season, 1888-89. To celebrate the occasion, six fixtures have been dubbed “anniversary games”.

Half the these involve teams that featured in the very first Football League season. But only two will be played on grounds that were used in 1888: Burnley’s Turf Moor and Preston’s Deepdale.

It’s a nice touch by the Football League, celebrating the 125 by putting the focus on some of the competition’s pioneering clubs. The original 12 clubs are experiencing contrasting fortunes at present:

It’s good to see, though, that of the original 12, most have firm foundations and have remained part of the core of English football. Let’s not pretend, by the way, that Accrington are anything to do with Accrington Stanley clubs that have existed down the years. Of the 11 others, only Notts County have never won the Football League, but the last time any of the first 12 won the title was in 1987 when Everton last came top of the pile. In short, these clubs represent the past more than the future, although Everton, Villa and Albion may all disagree with that. 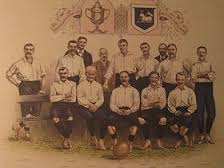 When Preston North End won the championship in that first season, in fact the double, few would have predicted that it would be the first of only two titles – the second was a year later. Preston were unbeaten in 1888-89, winning all but one of their home games, the other being a draw with Villa. Preston’s team picked itself for much of the season: Welshman James Trainer in goal; solicitor Bob Howarth and Bob Holmes at full-backs; Scots Geordie Drummond, David Russell and Johnny Graham in the half-back line; Jack Gordon and Sam Thompson on the wings; and a trio of forwards who were lethal in front of goal – Jimmy Ross (known as the little demon), John Goodall, born of Scottish parents but an England international, and fellow international Fred Dewhurst, who scored Preston’s first ever Football League goal in their opening day 5-2 win over Burnley. There was a huge Scottish influence in the Preston team, unsurprising given the progress of the game north of the border at that time. Preston have never had it so good since!

The Football League’s decision, however, to designate six fixtures as anniversary games is a timely reminder that football does not begin and end at Old Trafford, Stamford Bridge or the Etihad. It all started at places like Deepdale, Turf Moor and Stoke’s now long-gone Victoria Ground.

Game of the People will be at Fleetwood v Dagenham & Redbridge this weekend.