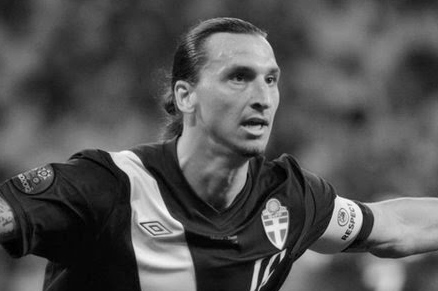 If anyone made a biopic about Manchester United legend Eric Cantona, the part of the great sardine fancier would surely have to be played by Zlatan Ibrahimovic. The two players, arguably the most exciting players of their generation, have much in common in terms of their playing style and on-field presence.

Cantona was a player that you could not keep your eyes off, his charisma, self-belief and audacity was wrapped-up in a package that was simply irresistible. Recall the puffed-out chest, the slowly-raised arms when he scored, inviting the fans to pay homage to his genius. Arrogance, yes, but also – at times – sheer brilliance.

Ibrahimovic is similar, capable of producing football that few can match. He’s unpredictable and occasionally, a wayward talent that blows up. But to quote a well-worn TV advertisement, “he’s worth it”.

Indeed, Ibrahimovic has been one of football’s most celebrated hired guns, taking his services from club-to-club, scoring prolifically – 283 goals in 558 games – and habitually picking up major trophies. But he’s yet to win the UEFA Champions League, despite playing for Ajax, Milan, Inter, Juventus, Barcelona and Paris St.Germain. His record of winning League Championships is remarkable:  2004 – Dutch title; 2005 to 2009 – Serie A; 2010 – La Liga; 2011 – Serie A; 2012 –  no title; 2013 – Ligue 1. He’s won the Italian title with three different clubs and in all, four different national championships.

This season, he’s got a prolific partner to play alongside  in the form of Edson Cavani, so Paris St.Germain should retain their crown, despite the challenge from equally-monied Monaco.

But the “Ibra” camp is unhappy. “I am Zlatan” has not be short-listed for the Ballon d’Or, the FIFA World Player of the Year. He should be, because he represents a style of play not found in the other contenders. Messi and Ronaldo capture the headlines with Barca and Real and rightly so. Ribery plays for Bayern, arguably the best club side in the world today. La Liga is considered a stronger league than Ligue 1. But is it that much different? La Liga is a two-team competition that, this season, has become three. The quality across La Liga – is it that good? Real Sociedad’s performance in the Champions League did not suggest there is that much strength in depth. And Germany? Look at how Chelsea and Manchester United – neither of whom are firing on all cylinders – dismantled Schalke and Leverkusen respectively.

Italy. When the “Azzuri” went home in 1966 after failure in the World Cup, they arrived to “their rotten tomatoes”. Italy’s performance in the Champions League may warrant similar treatment this year – only a below-par AC Milan made the cut.  France is no backwater and Ibrahimovic should not be discounted because he’s plying his trade in Paris rather than Catalonia or Madrid. Messi and Ronaldo are the easy option, and well, I too would be frightened not to include a guy like Ribery in the shortlist.

Some of the goals Ibrahimovic has scored have been, to call on the new cliché, “worldy”. He makes a hobby of this, just remember his goal against England, which has been short-listed for the “Puskas goal of the year award”.

It’s nothing short of criminal that “Ibra” won’t be at the World Cup, but it is always going to be tough to have consistent international success if you are turning out for Sweden. George Best never played in a European Championship or World Cup, Kevin Keegan only managed about 20 minutes (ok, he’s not in the same class as “Ibra” or Best) and Ryan Giggs has never had to worry about fitting in a summer holiday because of Welsh international duties. Perhaps Bosnia will now take a look at the Ibrahimovic passport?

You could see Ibrahimovic linking up Jose Mourinho (how Chelsea would love a character like Zlatan) as there seems to be great mutual respect between them. According to the media, Zlatan described Mourinho as “cool…a big star…..the guy says what he wants, I like him.” The problem will be putting two enormous egos in the same room, but it would be interesting and entertaining.

But it’s possible that we may not see Zlatan in action at the top level for much longer. He has hinted at retirement in the past and you sense he may be the type of character to bow out with the Parisien crowd screaming for more – rather like Cantona’s own exit. At the moment, though, it’s worth thinking about hopping on Eurostar and heading for Parc des Princes….