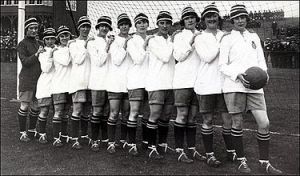 At this time of year, the story of how a truce was called in 1914 in the trenches and British and German troops contested a game of football – won 3-2 by the Germans, by all accounts – inevitably gets retold.

But Christmas Day 1917 is also notable in the history of football, for it is widely believed to be the day when women’s football started in England.

That was the day that the Dick, Kerr’s Ladies FC played in front of 10,000 people against Arundel Coulthard Factory at Preston North End’s Deepdale ground.

Dick, Kerr & Co was a locomotive and tramcar manufacturer based in Kilmarnock, Scotland. During the first world war, the company was converted to munitions and later also manufactured aircraft.

In 1914, the company took on a number of women in the munitions factory and after a number of them played in kick-around games with the men, they formed a ladies football team. Actually, they beat the men in a formal game!

Dick, Kerr Ladies survived the first world war and in 1920, played what many consider to be the first women’s international match when they met a team from France. The French team also met St.Helen’s Ladies before 53,000 at Everton’s Goodison Park.

But the FA banned ladies games at its member clubs in 1921. The FA issued this resolution: “Complaints having been made as to football being played by women, Council felt impelled to express the strong opinion that the game of football is quite unsuitable for females and should not be encouraged.”

Some of Dick, Kerr Ladies’ players became quite well known. There was Lily Parr, a robust girl who apparently could have also excelled at rugby. She played until she was 46, scoring 900 goals. One of the most talked about women in the 1920s, she has since become a LGBT icon.

Dick, Kerr Ladies changed their name to Preston Ladies in 1926 and they played on until 1965. Lily Parr, meanwhile – who died in 1978 – was inducted into football’s hall of fame.

Merry Christmas from Game of the People.