It’s fashionable to liberally throw the word “legend” around, but very few footballers actually achieve that status in their lifetime, let alone when they pass from view and their legacy is grainy video footage or yellowing newspaper coverage. In Portugal this week, the government has declared three days of official mourning for the death of one genuine sporting icon – Eusebio da Silva Ferreira.

Eusebio was so good he inspired many nicknames, many of which defy political correctness in today’s world. Pantera Negra or in English, Black Panther is one of them. Today, he may be called “the Panther”, but the nickname was not to deride his African roots. Panthers are strong, muscular, graceful and powerful, rather like the great man in his prime. In footballing terms, he was feared by opposition defenders.

I can’t imagine he was known by any of these names off, or indeed, on the pitch. They were surely media tags, coined by journalists eager to add some drama to Eusebio’s reputation. When one of Eusebio’s team-mates wanted the ball, did they call to him, “Hey, Black Panther, over here,” or did Simoes, Torres or Graca use one of his nicknames – Black Pearl was another – after the game: “Well played Black Panther, my old son”?  No. But if ever a nickname suited a player it was “Panther” (black or otherwise).

I first came across Eusebio in 1968, staring at me from a London Evening News special edition for the 1968 European Cup final. A school teacher lent me her copy of it to read ahead of the final between Manchester United and Benfica which was on TV later that night. She told me that Benfica would win because “Eusebio will be too good for Manchester United.”  She was wrong, but this very game started me scanning publications like “The International Football Book”, “Football Monthly” and “Goal” as I was first introduced to the world of European football.  Eusebio was arguably the first foreign player I became truly aware of.

This was also partly due to the impact he made two years earlier in the World Cup. Although England won the competition and the FIFA player of the tournament was Bobby Charlton, the real star of the 1966 World Cup was Eusebio. He was the leading scorer in the finals with nine goals and won the “Bronze Ball” from FIFA as the third best player. He was also in the “All-Star Team”. But in truth, Eusebio’s contribution outstripped any other individual in 1966.

Eusebio’s performance against Brazil, dethroning the champions and pushing Pele left of stage, prompted a wave of headlines that a new force had arrived, “the King is dead, long live the [new] King”.  But when Eusebio’s team-mates mercilessly hacked down the old monarch, his successor stood by him as the stricken Brazilian was being treated. “Because he was my friend.” This was by no means an isolated example of Eusebio’s humility and decency.

And then in the quarter-finals, Mozambique’s favourite son single-handedly dragged Portugal from 3-0 down to win 5-3 against North Korea, scoring four goals in the process.  In the official FIFA film of the 1966 competition, Brian Glanville’s script said it all when commiserating with the underdogs: “How hard that they should meet Eusebio.”

Portugal lost 2-1 to England in the semi-final, a game that still rankles with the Portuguese as the FA switched the game to Wembley from the intended Goodison Park. On the field, Eusebio was shackled by Nobby Stiles, but still scored. Bobby Charlton, England’s own Eusebio in terms of cultural status, scored twice and the Portuguese, who had charmed all but Brazilian ball-players, were out. Eusebio, stymied for 90 minutes, left the field in tears. We never saw Eusebio in another World Cup finals.

What happened next is open to debate. Eusebio, who had shone brightly in the shop window, was said to be bound for Italy, signing for cash-rich Inter Milan. There are a number of theories why this never happened. Firstly, Italy had been humbled in the World Cup and in the aftermath, the footballing authorities decided it was in the best interests of the national team to restrict the import of foreign players. The story that Antonio Salazar, the Portuguese dictator intervened and prevented Benfica’s greatest asset from moving abroad has greater credibility. There is another consideration in that Eusebio may not have relished catenaccio week-in, week-out. Whatever  the reason, Eusebio stayed with Benfica and ran out at Wembley in 1968 to face England’s finest once more. 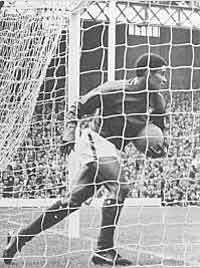 United beat Benfica 4-1, but in normal time, with the scores 1-1, Eusebio looked set to score. He shot with his left foot with power, but Alex Stepney stopped the ball. Thwarted by some brave goalkeeping, Eusebio congratulated the United man. It was a scene that has been remembered, and replayed, many times down the years.

It’s why Eusebio was so revered in Britain. No trip to Benfica by the TV cameras was complete without a shot of Eusebio in the stand, invariably looking pained due to his failing health. Players like Pele, Bobby Charlton and Franz Beckenbauer treat each other as retired old adversaries, full of respect for each other’s ability and sportsmanship, and that same camaraderie always extended to Eusebio. Will the current generation be as generous to each other when they retire to their mansions? It’s doubtful.

What is also worth questioning is whether a “Eusebio” from Mozambique would emerge in the way he did in the early 1960s. He was a child of the colonies, adopted by the conqueror. It’s a habit that has been on the decline for years. Africans play for their country these days. If that had been the case in 1961, we may never have seen Eusebio on the biggest stage. As it is, the technology wasn’t there to give us a better legacy than we have today. But just watch the 1966 World Cup film and marvel at the power and grace of one of the greats. Rest in peace, Pantera Negra.