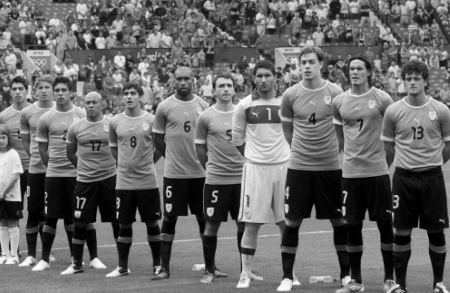 Picture the scene in 1950: 200,000 people packed into the Maracana Stadium, awaiting to pronounce  Brazil as the new kings of world football. But then their opponents, in the game that will decide who will win the fourth World Cup, stun the crowd to win 2-1. Uruguay were the opponents and they lifted the Jules Rimet trophy for the second time. One nation goes into mourning, while a small South American country on the banks of the River Plate becomes hysterical.

It’s debatable whether Brazil has ever got over that loss. True they have won the FIFA World Cup five times since, but on their own patch, in front of their own people, it was supposed to be the dream occasion. For Uruguay, it represented the pinnacle, beating their bigger and noisier neighbours in the massive Maracana. But could it happen again in 2014?

Question: Who are the South American champions at present? Yes, it’s Uruguay, who won the Copa America in 2011. Let’s not forget, they also reached the semi-finals of World Cup 2010 and their now veteran striker, Diego Forlan, was named player of the tournament. And who should they also have in their ranks today but Luis Suarez and Edinson Cavani, two of the world’s most coveted strikers. So there’s some basis to think Uruguay will make a bit of a splash in Brazil 2014.

Let’s face it, Brazil will be under enormous pressure, although TV footage of riots and discontented people suggest that not everyone is behind the competition. Can they live up to the expectations of a 200 million people? If they can’t, then Argentina and Uruguay will be waiting to pounce.

The late Ondino Viera, who managed the Uruguayan national team in the 1960s, said on the eve of the 1966 finals, “Other countries have their history, Uruguay has its football.” That should really read “Montevideo has its football”, for of the Primera Division’s 16 teams, 13 are from the capital city. No surprise there, given that 1.3 million of the country’s three million people live in the metropolis. The big two in Uruguay, Penoral and Nacional, have overwhelmingly dominated domestic football in Uruguay, with 91 championships between them and 81 runners-up spots. There have been only 18 other occasions where another club has won the title. Eat your heart out Barca and Real!

As well as the aforementioned Forlan, Uruguay has produced some fine players. Juan Schiaffino, a slender and skilful forward, was in the team that beat Brazil in 1950. He went on to repatriate in Italy and play for their international side aswell. In the 1960s, Ladislao Mazurkiewicz was frequently rated one of the best goalkeepers in the world and in Mexico 1970 was named in the FIFA team of the finals. Pedro Rocha was a familiar name from that period and he played in four World Cup finals. And then there was Enzo Francescoli, dubbed “El Principe”, the Prince, his graceful style marked him as one of the best players of the 1980s and none other than Pele considered him one of the top 125 greatest living footballers of all time in 2004.

Some great players, but too often, Uruguay has been linked with the less savoury side of the game, their strong-arm tactics overshadowing technical brilliance. Just take Luis Suarez today – one of the great strikers of the modern game, but capable of letting himself – and his team – down with unacceptable behaviour. Just ask Chelsea’s Invanovic if the teeth marks have left a scar.

Making a meal of qualification

If Suarez is Montevideo’s favourite carnivore, the Uruguayan team certainly made a meal of qualifying for Brazil 2014. They had to go to an inter-continental play-off, beating Jordan 5-0 on aggregate – actually trouncing Jordan 5-0 away and then drawing 0-0 at home. The arduous qualifying campaign, involving 16 games, saw them win seven and lose five. Ironically, given their victory in Jordan, their away form was very suspect, with all five defeats coming on the road. They scored 25 goals in their 16 games (11 from Suarez, five from Cavani) but conceded just as many. At one stage, it looked as though they would even miss out on a play-off, but their final game saw them beat Argentina 3-2 in Montevideo.

So who do we have to watch out for from “La Celeste”? Obviously Suarez and Cavani will be one of the most feared front-line duos in Brazil. They will certainly scare their group rivals, England, Italy and Costa Rica, which is the nearest thing to a “grupo de morte” in the first stage – as illustrated by the gestures of the Football Association representative at the protracted draw ceremony.

Unsurprisingly, most of Uruguay’s squad plays abroad. They are mostly spread across Europe and Latin America – in addition to the heavyweights like Suarez and Cavani, Christian Rodriguez is at Atletico Madrid, Martin Caceres is with Juventus, while skipper Diego Lugano is at West Bromwich Albion. Forlan is now plying his trade in the J-League with Cerezo Osaka.

Critics may point to a lack of pace in defence and a tendency to play too deep. Lugano, for example, is 33 and Nacional’s Andreas Scotti is 38. These old hands will line-up in front of arguably the continent’s best keeper in Martin Silva, who plays for Brazil’s Vasco de Gama.

The World Cup could be the last chance that midfielder Nicolas Lodeiro has to convince people he is a rare talent. He was expected to shine in 2010, but a lack of maturity has prevented him from fulfilling his potential so far. He had a short stint in Holland but now plays in Brazil with Botafogo. A good World Cup could see him back in Europe.

Although the Uruguayan squad is fairly settled, their approach is hard to determine. Coach Oscar Tabaraz adopts several styles, ranging from conventional 4-3-3 or 4-4-2 formations to 4-4-1-1. The problem is, when you have Suarez, Cavani and Forlan to choose from, it is difficult to go for the single striker. Tabaraz has struggled to get the best out of this triumvirate and inclusion of all three has often created problems further back. With Uruguays’s defenders long in the tooth, that could prove disastrous. But if he gets the blend right, and Forlan has also shown his age recently, Tabaraz will have – if nothing else – a very potent attacking capability.

The road to Rio

Uruguay have three warm-up games booked. In March, they play Austria in Klagenfurt and then they host Romania and Slovenia in Montevideo. There will surely be more games before the finals. Game of the People predicts they will get through Group D and then they will have the winners or runners-up of Group C (Colombia, Greece, Ivory Coast and Japan). That’s not the toughest round of 16 test. If they win the group, they could be heading for a quarter-final with Spain, if they finish runners-up, it could well be Brazil. If they come through either of those, they deserve to be in the running. After that, it doesn’t get any tougher than the hosts and the holders. Outside the expected favourites of Brazil, Germany and Spain and possibly Argentina, Uruguay could be next in line – assuming Suarez and Cavani do the business…