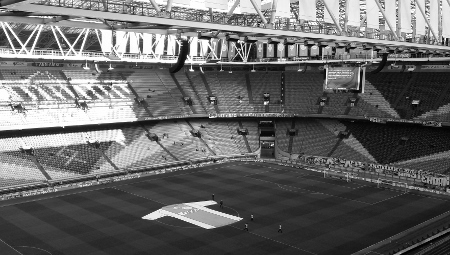 Cruyff, Neeskens, Rep, Krol, Haan, Keizer…names that roll off the tongue. Names that made Ajax the best team in Europe, arguably the world, in the early 1970s. Ajax wasn’t just a household cleaning product, or an Airfix model of a warship. It was the name of one of the most inventive and exciting teams ever to grace a football pitch. This team was definitely of its time and anyone who saw them in action was captivated by them. It was rock and roll football. “Total Football”.

Romantic visions of Ajax soon come down to earth when you visit the 2014 version. Sadly – and it is indeed very sad – Dutch football is a shadow of its heyday. Thankfully, it hasn’t collapsed the way it has in some countries such as Hungary, but it struggles to keep pace with the quintet of England, Germany, Spain, Italy and even France.

It’s not all bad news. In World Soccer’s survey of the planet’s most important football leagues, Holland was ranked the eighth best league – not a bad position – and its goal per game ratio was 3.26, the highest in the world. Attendance-wise, the Eredivisie was the sixth best with an average of 19,466, partly attributable to the healthy gates attracted by Ajax.

Ajax, unsurprisingly, are poised to win their fourth consecutive title this season, which would be their 25th in total. But let’s not kid ourselves that Ajax are a UEFA Champions League heavyweight anymore. They were bounced out at the group stage in a group that included Barcelona, Milan and Celtic, a group of [Barca excepted] faded giants. That put them into the Europa League and that was an absolute disaster. Ajax were beaten not once, but twice, by Red Bull Salzburg of Austria, including a 0-3 home defeat. If any result encapsulated the current condition of Dutch domestic competition it is surely this one.

Is the Star of David really “official merchandise”?

But still the crowds come to the Amsterdam Arena, a stadium that may be impressive on the inside, but on the outside it resembles a confused multi-storey car park. It has not weathered well since it was opened, in fact, it looks fairly shabby. It doesn’t make a statement that this is the home of Holland’s greatest football club, there is no grand entrance, nothing that tells you that you are approaching something special. Even mid-range English clubs make it known that you are where you are.

Inside, however, it is one of the game’s great venues. That is, if you happen to sit in an area that doesn’t have a Perspex segregation wall topped by serrated teeth that would not look out of place in the latex mouth of Spielberg’s Jaws. It’s also unique in that the stadium is more vivid when it is empty than when it’s full, thanks to a rather unique use of primary colours in the seating lay-out.

The Arena was one of the first of the new breed of football stadium. Ajax moved from their ancestral home at De Meer to a new purpose built ground that was big enough to cater for every need. In the glory days of Ajax, they played their big European ties at the Olympic Stadium rather than the homely environment that was De Meer. It’s all buried under a new housing estate now, but the famous old Ajax lettering that stood atop the stand can be found nearby at the training centre, Toekomst. I took a stroll over to take a look, only to find Cirque du Soleil had set up home in the car park…one big top in the shadow of the Ajax big top. For all its modern functionality, I bet there’s a few Ajax fans who hanker for the intimacy of De Meer to the uber-corporate world of the Arena. On the other hand, there’s a great atmosphere when it’s full, which is more often than not when Ajax play at home.

On the day Game of the People visited Ajax, they were playing host to SC Cambuur from the Friesland town of Leeuwarden. I came across a group of their fans at Amsterdam Centraal Railway Station. They had just arrived and were making a lot of noise and generally making a nuisance of themselves. Apparently, the club’s fans are among the most notorious in the Netherlands, so I shouldn’t have been too surprised about what was to follow.

Cambuur’s fans, known as M.I. Side, according to a banner being carried on the train out to the Arena, have not had much to cheer about on their travels, before meeting Ajax, they had not won away from home, collecting just five points. But in recent weeks, they had been on a good run, drawing at Groningen a week earlier and beating Roda and Zwolle prior to that.

But Ajax had the best possible antidote to their Europa League failings before this game, coming from a goal-down to win 2-1 at old-rivals Feyenoord. Eight points ahead in the Eredivisie with eight games to go, Frank de Boer’s men look odds-on to finish the season on top once more.

A handful of Ajax players were involved with the Netherlands in their friendly in Paris against France in midweek: Daley Blind was in the starting line-up, while top scorer Davy Klaassen came on as substitute. Siem de Jong and Joel Veltman both warmed the bench without getting a run-out.

It was Siem de Jong who opened the scoring for Ajax against Cambuur after just two minutes, Ricardo Kishna racing to the byline, pulling the ball back and de Jong slotted home with alarming ease. It promised a goal-fest and if Ajax had not been so generous in the early stages, Cambuur would have gone home with severe damage inflicted upon their goal difference. Kishna caught the eye with his eagerness to run at defenders and it’s no surprise that some of Europe’s big clubs are looking at him. He could be the next Dutch export to earn his club decent money. He’s on a contract until 2016 and has only played a handful of Eredivisie games.

As the game wore on, Ajax looked sluggish and Cambuur started to realise they could get something from the game. By half-time, they had the upper hand and the crowd, all 52,354 of it, was getting restless.

The half-time interval signalled trouble. There was a lot of shouting going on beneath the stand and a surge of people down the stairs. Then the exits were locked as Ajax fans rushed to the windows, shouting abuse – but in this space, nobody could hear you scream [outside].

It was the sort of commotion that proliferated the 1970s and 1980s in England. Posturing adolescents and boozed-up middle-aged men. It was extremely inconvenient if you wanted to flex your “Arena Card” to buy a half-time refreshment. Outside the stadium, riot police stood in a rigid line forming a day-glo barrier as a few dozen Cambuur fans sat on a wall. In the mid-distance, youths – supposedly disaffected Ajax fans – streamed through an underpass. The stewards were letting no-one out of the stadium, “for their own safety”, despite abuse from fans eager to get at the Cambuur massive. For just a moment or two, the air was full of the sort of tension you experienced at a London derby in, say, 1976.

While all this was going on, the game restarted and Cambuur’s shock equaliser went almost unnoticed, a tame header from striker Martijn Barto. Ajax never regained their rhythm and a 1-1 draw was disappointing for the league leaders. It was fairly tepid fare.

What would someone like Rinus Michels or Johann Cruyff make of the decline of Dutch football, I wondered? Ajax 1970-1973 were part of the much-cliched “golden generation” for the Netherlands, it’s been hard to live up to for club and country. True, the Dutch have come again, winning the European Championship in 1988 with another fine bunch of players, and of course, they reached the World Cup final in 2010 with a snarling, grudging team that was the antithesis of “Total Football”. Ajax won the European Cup under Cruyff as coach and while they still stand at the top in their own land, they are unlikely to make much impact against the modern-day powerhouses. A pity.

Nevertheless, Ajax will forever be a big club in the way that Benfica and Celtic will always be regarded as “significant”. I liked the rousing and throaty (in Dutch, many words and songs sound throaty) “Ajax Marsch” and those white and red shirts are a welcome sight, if only to remind one of the days when Amsterdam was the centre of the footballing universe….