IF EVER there was a period in which England could claim to be “masters of the footballing universe” it was the Edwardian era. Although this was largely because the game in the United Kingdom had evolved faster than in other European countries, there could be little doubt that England were far advanced of their neighbours across the English Channel. This view would be strengthened in 1908 when England went on a summer tour to central Europe and later in the year, Great Britain would scoop the gold medal in the longest Olympic Games on record.

The world was six years away from a brutal and seismic war that would change the face of Europe. England was still imperialistic, wedded to its colonies and, dare with say, jingoistic. The continent was a hotbed of political tension, with alliances being forged in multiple directions. In fact, when England embarked on their tour, King Edward VII was on his way to see Czar Nicholas II to discuss the growing power of Germany.

England were travelling to the heart of the once powerful Austro-Hungarian empire, which was in the process of gradual disintegration. Vienna, the first leg of the tour, had seen something of a population explosion. Café society was in full swing, academics and artists proliferated the city and there were also fears around the rising Jewish population. Amid this vibrant and tense environment, one Adolf Hitler also arrived in Vienna in 1908. This city, whether it realised it at the time, was right at the centre of the Europe of the future. One writer said Vienna of the time was both “creative and dangerous”.

Austrian football was still in its infancy in 1908. A nation-wide football league was not yet in full flow and the sport was dominated by Viennese clubs. Not that Austria was without its 19th century clubs – Wiener SC were formed in 1883, First Vienna and the Vienna Cricket & Football Club – which still resides in the shadow of the Prater Stadium – were founded in 1894, and Rapid followed five years later. There was a strong English influence in the establishment of the sport in Austria. In 1904, the Vienna Football Association was formed, by a Brit, and is now resident at the Prater (now Ernst Happel Stadium). In 1906, a new attempt was made to establish a formal league with teams mostly drawn from the capital city. It was a similar story in Hungary where Budapest clubs like Ferencvaros and MTK dominated. In Hungary, football clubs were usually annexes of gymnastic clubs.

At an international level, Austria and Hungary met each other with monotonous regularity. England would break the sequence for Austria when they arrived in Vienna, bringing a 13-man squad of professionals with a sprinkling of gifted amateurs. 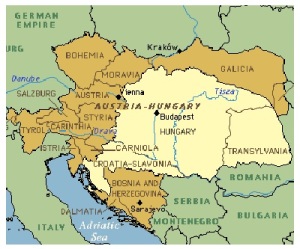 Champions of the world

By 1908, England had lost just three games in eight years. Their only two trips to continental Europe had resulted in resounding victories – 15-0 in France and 8-1 in Holland. To some extent, England were fortunate in having a ready-made championship on their doorstep in the form of the British Internationals. The development of the game in Scotland had certainly kept pace with England and the fixture between the two nations was one of the highlights of the season.

The 1907-08 championship was jointly won by England and Scotland, the outcome cemented by a 1-1 draw at Hampden Park in April 1908. England had a talented team, nine of which would make the journey to central Europe. Amateurs in the squad included Horace Bailey of Leicester Fosse, Bob Hawkes of Luton Town, Walter Corbett of Birmingham City and the great Vivien Woodward of Tottenham and later Chelsea fame.

Chelsea would have a big influence on the team. Their two star forwards, George “Gatling Gun” Hilsdon and Jimmy “the Wizard” Windridge were rampant on the tour, scoring 13 goals between them. Another player, Ben Warren, would join the London club before the 1908-09 season got underway. Warren was a tragic figure who was admitted to a mental hospital a couple of years later and would die very young.

Another player who thrived on tour was Sunderland outside left Arthur Bridgett, a devout Christian who would never play on Good Friday or Christmas Day, which was a requirement during his career. The squad also included Bob Crompton of Blackburn Rovers, a tough full back who would win 41 caps for his country, a record that remained unchallenged until Billy Wright passed it. 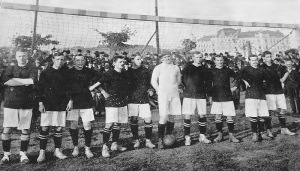 Austria were no competition for England and in the first meeting on June 6 at the Cricketer Platz in front of 3,500 people, they ran out 6-1 winners. Hilsdon and Windridge scored doubles and Woodward and Bridgett netted one apiece. The speed of the England forwards was too much for a pedestrian Austrian back line.

Two days later, at the Hohe Warte stadium, England bettered that scoreline to win 11-1.Woodward grabbed four and Bradshaw three. The other goals were scored by Warren, Bridgett, Rutherford and Windridge. Almost half the Austrian side played for sides from Bohemia.

The team moved on to Budapest and on June 10, they beat a Hungarian side drawn almost exclusively from Budapest sides. They won easily 7-0, with Hilsdon scoring four (plus goals from Windridge, Woodward and Rutherford). Interestingly, the referee was Hugo Meisl, who would later become the manager of the Austrian “Wunderteam”.

This really was a whistle-stop tour and on June 13, they travelled to Prague to play Bohemia at the Stadion Letna in front of the biggest crowd of the trip – some 12,000. The Bohemia side comprised 11 Slavia Prague players (pictured). This time England won 4-0 with goals from Hilsdon (2), Rutherford and Windridge. That was it, the tour was over, but a year later, England returned to central Europe where they did it all over again. They left an impact on local football folk, though, and when they returned to the region, the crowds were more than double 1908 levels.

And there was more…

In October, Great Britain won the gold medal in the London Olympics. Four members of the summer tour party were in the team that bear Denmark 2-0 in the final. In 1908-09, England won the home internationals with a 100% record, scoring eight goals and conceding nil. At that moment in time, you couldn’t dispute their record.

One thought on “The pioneers – England’s 1908 European tour”