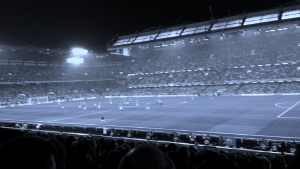 Doubtless there will be some protests, perhaps even the odd banner, but if the man from Saratov wishes it, there will be little that the fans can do about it – Chelsea will temporarily move from their ancestral home of Stamford Bridge while they pull it apart and rebuild it.

But isn’t a move to a new stadium really the next natural step in the club’s mission to join the European super league? With a capacity of little under 42,000, Chelsea are behind the top names in terms of stadium capacity. Demand for tickets outstrips supply, resulting in a hugely inflated pricing model. It’s nigh on impossible to get a ticket for a Saturday fixture at Stamford Bridge, although the multitude of touts that leech their way down Fulham Road shows no sign of evaporating. Touts even operate within the environs of the ground itself with prices that stir memories of Weimar Germany.

By moving to a new stadium, or even redeveloping Stamford Bridge, the club can add up to 20,000 extra seats to increase the ground to around a 60,000 capacity. That will allow them to look Bayern, Barca and Real in the eye.

While some of the die-hards will be appalled at the prospect of moving away from the Bridge, even if it is for a year or two, this should have been a good opportunity to make a significant improvement on the Chelsea matchday experience.

Stamford Bridge, before the Ken Bates-driven redevelopment, was a miserable ground. As far as size goes, it was a huge site. The monolithic, white elephant of the East Stand dwarfed the rest of the ground and the vast open north end was exposed to the elements and very ramshackle. On cold, midweek games in January, the risk of hypothermia was a serious consideration.

Bates eventually transformed the Bridge from a crumbling, unwelcoming edifice into the sort of ground – albeit on a less grand scale – that his predecessor, Brian Mears, aspired to create in the early 1970s – as outlined in the futuristic and bold “New Look” flyer from 1972. It’s hard to believe that the East Stand, merely the first stage of Mears’ blueprint, and still the most iconic part of Stamford Bridge, is now 40 years old.

Although Chelsea regulars have a better time than Blues fans of the past in terms of comfort, Stamford Bridge is no Emirates Stadium and with Tottenham and West Ham both planning new homes, Chelsea will come under pressure to have the sort of footballing palace their status demands. To quote Messrs Dreyfuss and Schneider in Stephen Spielberg’s blockbuster about a big-mouthed shark, “We’re going to need a bigger boat”. That should resonate with Mr Abramovich, who likes large seafaring vessels.

The question is, can they build that boat at Stamford Bridge – do they have the room? Firstly, the club has made the ground into a popularist dining mall and a very average hotel. Secondly, can the local transport links cope with another 20,000 people per game? That really means, can Fulham Broadway underground station handle it? Whichever way you look at it, that is the main transit point and the current experience is far from pleasant, although much better than in the distant past when you shuffled through horse manure to get to a dangerously claustrophobic station. There’s only so much that can be done to improve the link between ground and station, so whatever happens, it is unlikely to make that aspect of matchday at Stamford Bridge any better.

As much as it would hurt the traditionalists, Chelsea have may have been better off leaving Stamford Bridge.  That has obviously been explored, as evidenced by the aborted attempt to buy the Battersea Power Station site, but the latest news that the club is now looking to redevelop the Bridge suggests there are no viable alternatives.

And so it could be off to Twickenham, another ground with poor transport links. It’s a vast stadium, so even Chelsea will have room to breath. And when the Blues return to the Bridge, they could have a very special home ground. I can’t help feeling, however, an opportunity may have been lost. But if Abramovich keeps them in Fulham Road and provides the club with a suitable monument to his decade-long patronage, he will win the hearts and minds of his audience for ever. It could be his best PR move of all.