The Klopp-end or the Spion Klopp? – Arsenal and Liverpool may decide 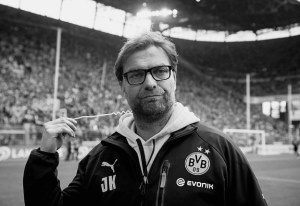 If an English Premier club decides to offer Juergen Klopp a plum job, and both Liverpool and Arsenal may just be thinking along those lines soon, then they could do far worse that opt for the Borussia Dortmund manager.

Watching Klopp after his team had been beaten by one of his possible future employers, Arsenal, was to see an altogether different type of manager than you normally see in those post-match interviews. “We have problems in the Bundesliga,” he admitted, pointing to Dortmund’s current record of three wins from 12 and a place in the basement of arguably Europe’s best-organised league. How often are coaches so honest? How frequently do they look for excuses?

Klopp, at the club’s recent shareholder meeting, said his players need to respond to the situation back at home. “The criticism from the big boss was accepted…he does not say a lot in public, but when he does, it’s always of the utmost importance,” commented central defender Neven Subotic. But Klopp also admits that he has to solve Dortmund’s current malaise and that he still has “unfinished business” at the club.

Klopp’s post-match comments at the Emirates made it easy to warm to him. “It’s… a…pleasure,” he said in a downbeat tone that appeared to be mocking on the one hand and humble on the other. The British media would love him if he came to the Premier. But the red-top headline-writers would equally welcome a name like Klopp to play with.

When Arsenal won the FA Cup last season, many people expected the Gunners to move up a gear in 2014-15, but it hasn’t happened, despite the undoubted impact of new signing Alexis Sanchez. The question marks against Arsene Wenger have re-emerged these past few weeks and that new three-year contract is starting to look like folly. Nobody wants to tell Wenger it’s time to move on, but they could shift him upstairs. Everyone wants it to be the Frenchman’s decision.

Klopp would be an ideal replacement. Why? Look at his record in a space dominated by the financial clout of FC Bayern. Two Bundesliga titles (2011 and 2012), one DFB Pokal win (2012) and a Champions League final (2013). He has a success rate of 58% with Dortmund and his team hasn’t finished out of the top two for four years, although the last two have seen Bayern stroll to the title. And importantly for Arsenal, Klopp’s brand of football is pleasing on the eye and uncomfortable for opposition goalkeepers. Purist football with silverware, something that has largely eluded Arsenal over the past decade.

Klopp, at 47, is relatively young. He can build a new dynasty at Arsenal or indeed, Liverpool should they dispense with Brendan Rodgers, a man whose fall typifies the “hero to zero” nature of modern football. Deep down, Klopp may consider he has taken Dortmund as far as he can, given the margin between Bayern and the rest of the Bundesliga.

But Klopp has his detractors, and the criticisms are similar to those aimed at Wenger and Rodgers. The high-octane pressing game that has served Dortmund well may have been finally sussed by opponents. And as Arsenal have discovered and Liverpool are rapidly learning, you need to replace quality with quality. Dortmund may have lost the heart of their team and the skeptics are starting to ask questions over Klopp’s ability to rebuild and remodel the Dortmund style. He has always advocated youth and it may be the regulars at the Westfalenstadion have to be a little patient.

Klopp has enormous charisma and style and his record tells you [almost] everything. He can certainly fill Wenger’s shoes, but there is a time limit on all of this. If Klopp’s team does not recover from its dismal start to the season, the cavalier’s star may start to fade. Equally, if Arsenal remain married to Wenger’s leaden-footed philosophy, they may also miss out on an opportunity and Klopp will be Kopped.