Wake up Hitchin! – The Canaries are ready to sing, “We shall overcome”

The last time the streets of Hitchin demonstrated community support of their local football club was in 1932. That was when the recently-reformed Canaries won the AFA (Amateur Football Association) Senior Cup and brought back to Hertfordshire a gleaming silver cup. When the team arrived from London by train they were met by hundreds of supporters waving their flat caps at the players. A charabanc paraded around town as people celebrated what was then a major triumph.

Eight-two years on, the Hitchin folk have their opportunity to show just how much the club means to the Hertfordshire town. The days when 10% of the local population attended games at Top Field are long gone, but there’s no denying that the football club is the most high-profile sporting entity in Hitchin.

The Save HTFC protest march takes place this Saturday, December 6. The protest is not confined to the football fraternity, either. If a supermarket is built on the Top Field site it could have negative implications for an ancient market town that has already seen its commerce eroded by retail park shopping. “Saving Hitchin” has become as much part of the dialogue around this project as “saving Hitchin Town FC”. And given the proposed site for the Canaries’ relocation is on one-time farmland, the people orchestrating the march are also tagging on “save green belt” to the mantra. With so many causes, it is not surprising that some Hitchin officials are hoping for 2,000-plus marchers.

But on the face of it, Hitchin the town has yet to wake up to the threat facing local commerce. There seems to be some apathy around its narrow streets about the march and the possible outcome of Hitchin’s biggest ever property deal. A recent campaign in a local village against – of all things, ecological wind turbines – saw every house in the village display posters in protest. Another local football club received opposition to its new ground in the form of flyers all over the town. Hitchin have delivered 12,000 flyers across the area. But it’s difficult to spot any visible sign of empathy so far. The local media, though, are falling over themselves to help and have done the club proud with screaming front-page headlines.

What are Hitchin Town trying to preserve? The club has played at Top Field since the early 20th century. After folding in 1911, the club was reformed in 1928 and returned to the ground, which had been used as an athletics stadium in the intervening years. It’s an old-fashioned ground that non-league purists and nostalgists love. At the same time, it’s falling apart and undermined by the huge trees that make it so visually appealing. For the 300-odd regulars at Top Field, it’s home. 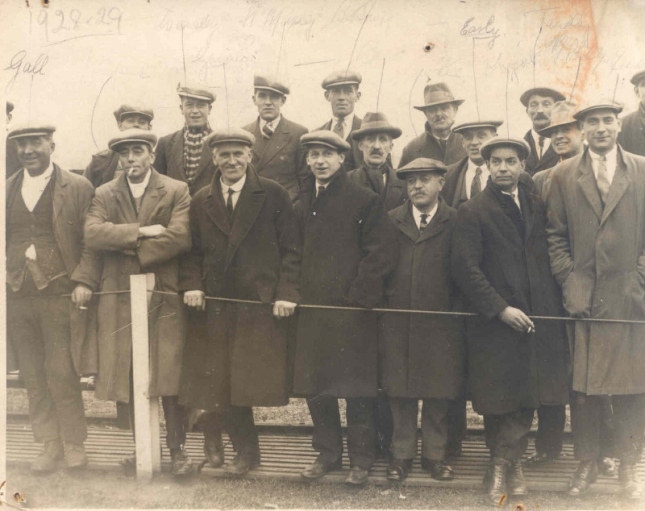 Top Field regulars in 1928, the year the club moved back to the ground after a 17- year absence

Surviving this latest twist in the club’s ongoing battle with its Cow Commoner landlords is only part of the task, however. In the unlikely event that a supermarket does get built on Top Field, the club will still have to address the ground’s dilapidation. While everyone eulogises about the “vintage” nature of the ground, it cannot go on forever. One wag at Hitchin suggested that the club should rebuild the ground in its current style, but in modern materials – rather like Germany did when it rebuilt its historic towns after the war. It’s worth a thought.

Why is Top Field so important? It is part of football’s heritage as one of the oldest grounds in Britain. It has played host to some big games, including some riveting FA Cup ties. The next couple of years could well decide if any more landmark football matches get played on this historic site.

Some people believe that if the club moves, it will be its death knell. But that may be a little dramatic and depends on whether you are a “glass half full” or a “glass half empty” person. For a start, the passion that exists in Hitchin’s current fanbase will not dissipate – you only have to see the strength of the following away from home. For many Hitchin fans, they will walk over hot coals to watch the team. Secondly, a big percentage of current fans do not walk to the ground, judging by the parking situation in and around Fishponds Road. And thirdly, a move could be the springboard to broaden the support base. There can be victory in defeat if the worst case scenario prevails, however unpalatable it might be to patrons of the wooden terracing. At the time being, this is not being contemplated.

Being forced to do something is never welcomed or easily accepted, and that’s the problem. Ask most Hitchin fans if they want a new ground and they will say yes. Tell them they have to move and you will get a different response. It’s human nature to a large degree, but this is where the club’s landlords have made a big mistake. They never consulted the club until it was too late.

That’s why Hitchin Town will not willingly go down the road towards Stevenage, or anywhere else for that matter. This weekend, the town has the chance to show how relevant the football club is. Club officials are holding their breath, but the signs are that they will get a healthy turnout come what may.