Neither fish nor fowl – the FIFA Club World Cup 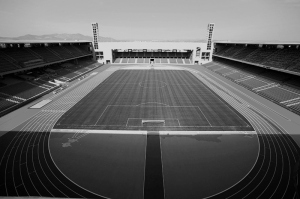 A few limp flags hung around an airport café and the match ticket booth provided the only firm evidence that something is going on in Marrakech. The livery for the FIFA Club World Cup has to compete with a film festival, which looks strangely similar. In the souks of the city, there is an air of ambivalence about the competition, although alongside Moroccan slippers, the tassled fez and tea pots, you will see football shirts hanging up and ready for negotiation: Barcelon (no a), Bayern, Real Madrid, PSG, Milan and Chelsea. No Moroccan teams – another case of the global game killing the local, it would appear.

A group of Argentine fans look lost in the middle of the vast and under-used airport. San Lorenzo, from Buenos Aires, won the Libertadores Cup to qualify for Morocco. They are favourites to reach the final to play Real Madrid on December 20 as they are up against New Zealand’s Auckland City in the semi-final on December 17. San Lorenzo is Pope Francis’s favourite team. His Holiness may not be aware that Matadores (one of many nicknames), assisted their Libertadores campaign by taking Viagra, supposedly to combat the effects of high altitude when they travelled to meet Bolivar of Bolivia in the semi-final.

South American countries take the Club World Cup seriously and when San Lorenzo flew to Africa, over 1,000 fans packed into Buenos Aires airport to see the team off. How many will actually make the trip to Morocco?

Marrakech will now host both semi-finals as well as the final after the pitch in Rabat, which was due to host the semi between Real Madrid and Maxico’s Cruz Azul, was declared unfit. Moroccan football officials are now feeling the heat from the administration. That said, there were rumours floating around – after the early elimination of the Moroccan representatives, Moghreb Tetouan – that the Rabat public had gone cold on the competition and FIFA were handing out free tickets to swell attendances.

Marrakech is now expecting a big influx of fans from Real, San Lorenzo and Cruz Azul and various Spanish dialects were already being heard around the Southern Medina of the city on Sunday evening.

While people will surely be excited by the arrival of Ronaldo and co. in the ancient walled city, the underlying feeling is that the potential of a global football club competition is still not being realized. The FIFA Club World Cup is a clumsy looking tournament, which even in its pocket-sized format, is over blown – Third and Fourth-placed play-offs, let alone fifth and sixth place play-offs, are all very well in a 32 team competition, but in such a small format, they appear pointless. And with all due respect to the other entrants, it is still likely to be Europe v South America in the final, although there have been notable expections. Since 2005, from when the competition started its sustained run, only twice in nine years has a team from outside the UEFA Champions League and Libertadores Cup played in the final.

It could, and should, be an opportunity to have a true global event, instead of something sandwiched into the league programmes, to be played in a far-off land. Is it not time to play the competition every two years and install a 16-team format that can be played in between FIFA World Cup and continental competitions such as the European Championship?

Imagine a tournament like this – using 2014 as an example

Winners of the continental champions competitions for 2013 and 2014, with the best runners-up in the UEFA Champions League and Libertadores Cup in that period.

Of course, to accommodate such a format, it might be worth slimming down the UEFA Champions League and strengthening the Europa with some of the skim-off. Club football of the highest quality has, effectively, replaced internationals as the compelling spectator currency. An argument can be made that such a club competition might include too many weak clubs, but the World Cup has long succumbed too the game of “minnow bashing” in its first fortnight.

A 16-team tournament will allow enthusiasm to build over a reasonable period. One of the problems with the current tepid format is that it is over before you can blink. Venues are also debatable. Morocco, for all its exotica, is not the optimal stage for such a gathering of footballing elite. Neither is Abu Dhabi. The FIFA Club World Cup has never been held in Europe and only once in Latin America. Host it at an outpost and you are not going to get the traction the competition needs. Which does beg the question, is FIFA really committed to the FIFA Club World Cup?