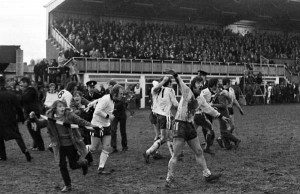 So poor old Hereford United have passed into footballing folklore. They are deceased…no more…they have shuffled off this mortal coil. Before we get too Pythonesque about the death of a football club, let’s recall that Hereford United have delighted us all with one piece of football magic that gets replayed every single year. “Radford again….oh what a goal”…February 5, 1972, one of the great FA Cup goals, scored by Ronnie Radford, that produced a major cup shock – Hereford United 2 Newcastle United 1.

That cup win, one which BBC commentator John Motson will always remember as it was his big breakthrough on Match of the Day, propelled the club into the Football League in 1972. They gave West Ham a difficult time in the next round and finished runners-up in the Southern League (to Chelmsford City) before being elected to the big time.

Sadly, Edgar Street, the home of Hereford United, is unlikely to ever play host to such a momentous occasion again, unless a new club rises from the ashes. It’s a sad, messy and some might say, unnecessary outcome. There is talk today that the club’s owner, Andy Lonsdale, was stuck in traffic and could not reach the court on time to provide evidence that he had the £1 million needed to pay the club’s creditors. How often have we heard such tales – why the 11th hour solution that falls victim to traffic in this age of electronic media and communications?

Hereford supporters, some of whom tried to protect the ground from looting after the decision to wind the club up, have long mistrusted Lonsdale and his associates. They are now delighted that, at least, this regime is no more.

This is a club that has struggled for years. Some 20 years ago, their then-Chairman Peter Hill, who seemed a pragmatic individual, told me that his horses had been attacked and wounded by supporters who were unhappy about the club’s lack of success. At the time, Hereford were struggling in the bottom division of the Football League. They were relegated from the Football League in 1997 and 2012, the latter proving to be the death knell of the club.

But it may not be the end. Inevitably, there are already plans to start a fan-owned club. But how many people will really care about Hereford’s demise? In their first Football League season, the club averaged almost 9,000 at every Edgar Street league game. Attendances never hit that level again, despite Hereford reaching the old Second Division in 1976-77 with former England winger Terry Paine in their ranks. By 1981, gates were down at the 2,500 level and in 2013-14, they were as low as 1,800. This season, amid protests, boycotts and uncertainties, the average is barely 400. It does seem that Hereford United experienced a long, slow and painful decline and death.

There does, however, seem enough interest to start a new, fan-run club. Many Hereford fans had already considered that their club had died in the summer of 2014. A fan-run club – undoubtedly the future of non-league football – will have its limitations, and it may be that the city that was the birthplace of Nell Gwynne (there is a pub near Edgar Street under threat of closure at present) and the legendary rock band, Mott the Hoople, and, incidentally, hosts the Mappa Mundi, the famous medieval map of the world, may have to get used to much more humble fare.

But the Hereford United story is a case of “there but for the grace of God go I,” because many non-league clubs are vulnerable to bad management and sub-optimal club ownership models.

The local council, owner of the freehold to Edgar Street, are looking to take over the ground, but this will take time and with the Christmas and New Year period upon us, little action can be anticipated until January. Meanwhile, the Hereford fans, who are “shocked, hurt and angry”, are promising a fresh start for a club who once delighted the British football public. There’s nothing like a crisis to conjure-up community involvement and Hereford United’s long suffering fans will be hoping right now that they can rekindle long lost support for their club. We wish them well.

One thought on “Hereford: We will always have Ronnie Radford”