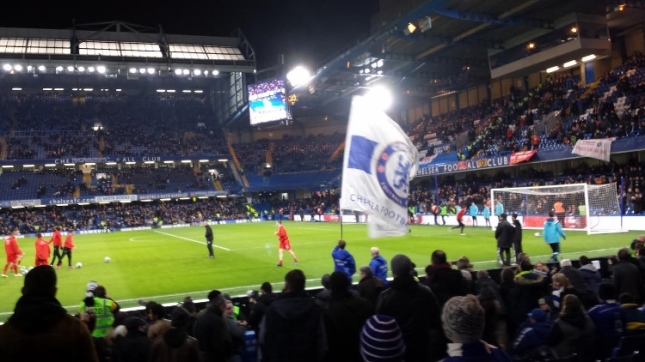 The banners hanging from the top tier of Chelsea’s Shed End stand told you everything you needed to know about Liverpool. All very Jethro Tull. “Spion Kop…A true democracy”. “Liverpool, European Royalty”. “Shankly’s red army”. “We live for the nights to remember…1977, 1978, 1981, 1984 and 2005”. “Five times…FACT”. These were all calling cards for a club that hankers for its glorious past. The people’s republic of Liverpool was in town.

In happier times, Liverpool would have filled their end of the ground, but a third was turned over to Chelsea fans. But they were, as ever, noisy with their [often] vitriolic soundtrack. That said, there’s nothing like a Chelsea v Liverpool game to incite passionate, obscene and, occasionally, humorous chanting – with a flavour of North-South divide – from both sets of fans. It made for a terrific atmosphere that helped spur on the teams to produce an enthralling Capital One Cup Semi-final second leg you couldn’t take your eyes off.

Liverpool fans love to taunt Chelsea for their lack of “history”. This is complete nonsense and if Liverpool were winning pots on a regular basis – they’ve not done badly in 20-odd years, but they have lost the prizes they held most dear, the league title and a place among the European elite – they wouldn’t care too much about Chelsea.

Red flags and the sunset

When Liverpool won the Football League title in 1963-64, did they have any real history? Let’s examine the Anfield archives and before we do, let’s acknowledge that the word “history” does not discriminate between success or failure. Before the Shankly era, Liverpool had won five major prizes – admittedly, all League titles. Before the Abramovich era, Chelsea had won seven prizes, one title, three FA Cups, one European prize, two League cups. Liverpool were founded in 1892 and won their first championship in 1900-01. Chelsea took 50 years to win anything. Before Shankly, Liverpool were floundering and spent eight years in the second division before winning promotion in 1962. Liverpool’s “history” was created between 1963 and 1990, a 27-year stretch where they were top of English and, dare we say, European football. There can be no denying they had a marvellous dynasty that created some wonderful moments that we all enjoyed.

Chelsea, by contrast, had a history that was characterised by under achievement and thwarted ambition. But they won a European prize before Liverpool (1971 versus 1973), so you could say they have a longer European pedigree than the Reds, although that’s a lame argument.

For Shankly read Abramovich. There’s something very Soviet about all this. The history books will tell you that Shankly created this “democracy” that is still eulogised on Merseyside (at least the red side), although having stood among the Kop faithful I can honestly say it is the survival of the fittest rather than a people’s cooperative where all animals are equal. Having watched the drama of Heysel unfold and avoided being at Hillsborough by sheer good fortune (I went, instead to the other semi-final at Villa Park), democracy is not a word I would use to describe the club’s followers.

However, folklore would have it that Shankly was the ultimate man of the people, a cod-philosopher steeped in socialist principles that easily identified with the man on the terrace. The Kop choreographer. Shankly created Liverpool’s “history” as Roman Abramovich is building Chelsea’s football legacy today. In 40 years’ time, the period between 2003 and beyond will be looked upon as Chelsea’s golden age, in the same way that Liverpool’s long run at the top is looked upon today. At some point in time, everything is history, belonging to the past.

Liverpool’s problem is that football fans come to “expect” continuity. When Liverpool were beating all before them, and Anfield was a place to fear (in and outside the ground), nobody expected the party to end. Brussels 1985 and Sheffield 1989 knocked the club for six, however, and in some ways, may have contributed to its [relative] decline. By the time the ban inflicted upon English football, due to the behaviour of Liverpool’s fans, was over, the sun had set on the age of the Kop. Enter Manchester United, Arsenal and then Chelsea. While you could never call United or the Gunners “new money”, Chelsea were certainly beneficiaries of a different paradigm and that, along with a supposed lack of history and Chelsea’s “famous plastic flags” (another jibe from the Liverpool end), is what irks supporters used to having their own way for so long. They seem to forget that in their heyday, Liverpool (and Everton) both benefitted from the Littlewoods pools empire owned by their backers, and that helped in no small way in giving these clubs an advantage over their rivals. Liverpool and Everton also “bought” success, albeit on less money than Chelsea, Manchester City and Paris St. Germain currently have at their disposal.

Liverpool can scarcely complain about a lack of money, however. Their current manager, the Jose Mourinho protégé Brendan Rodgers, spent over £ 100 million in the summer. Last season, they were inches away from winning the title, playing some excellent football, but as the Chelsea crowd reminded them, Steven Gerrard slipped on his “f****** arse and gave it to Demba Ba” and the big prize went City’s way.

This season, they have struggled, notably in the UEFA Champions League where they went out very cheaply. But over the two legs of the Capital One Cup semi-final, they showed they are on the way back. Chelsea, by constrast have sat on top of the table virtually since the off and although two worrying defeats (3-5 at Tottenham Hotspur and 2-4 at home to League One Bradford City in the FA Cup) had raised doubts about the Blues’ defence and some of their fringe players.

Mourinho has to win something this season, and it has to be big – probably bigger than what is the Football League Cup. There are certain parallels with Mourinho’s first period, although the “special one” hit the ground running in 2004 whereas this time he has bedded in for a year. Therefore, Chelsea could not afford to let this competition go the way of the FA Cup, especially as Manchester City arrive at Stamford Bridge on January 31.

The pace of the first half suggested that both sides were out to kill-off the other. There was no sitting back as the tie was finely balanced. A 1-1 draw in the first leg – a game that was dominated by Liverpool – meant that Chelsea could not take advantage of the away goal rule until extra time. Therefore, both teams needed to score if they wanted to avoid a 120-minute game.

Liverpool had the better of the first half, although they came under pressure in the latter stages of the second period. Chelsea’s midfield, notably Nemanja Matic and Oscar, seemed to have problems finding their man, although the former was chiefly employed to break up play. Cesc Fabregas also had one of his least influential games. Up front, Diego Costa and Liverpool’s impressive Martin Skrtel enjoyed a combative tussle all evening and Chelsea’s prolific scorer was kept fairly quiet in front of goal, although his work rate and nuisance value played their part. At the other end, Kurt Zouma, the giant centre back from France, showed that he will have a pivotal role in a post-Terry Chelsea defence. Raheem Sterling, for all his energetic running, was rarely a threat. One Liverpool player who failed to impress was the unorthodox and clumsy looking Mamadou Sakho, who surely cannot have much of a future at Anfield.

And so, to Wembley

The same could be said of that great enigma, Mario Balotelli, who entered the battle in the second half. He looked out-of-sorts and remains an unpredictable and untapped talent. Liverpool must regret writing such a big cheque to acquire him from Milan as he looked like a player who doesn’t belong. You could argue that Balotelli could have prevented Chelsea’s winning goal in the fourth minute of extra time. Branislav Ivanovic, an under-rated player who has a penchant for scoring against Liverpool (two goals in a vital Champions League tie), nodded home from close range after Willian’s high cross.

Liverpool should have levelled when Jordan Henderson headed wide and Thibaud Courtois pulled off some saves that kept Chelsea in the game. The Bradford defeat – where Petr Cech was in goal – may have handed the keeper’s jersey to Courtois for keeps now.

A 1-0 win for Chelsea put them through to the final, where they will face Tottenham Hotspur at Wembley on March 1. As for Liverpool, they still have the FA Cup and the hopes of a late run to try for a Champions League spot. One thing this game showed was that  Rodgers desperately needs a striker. Chelsea? They are making history.