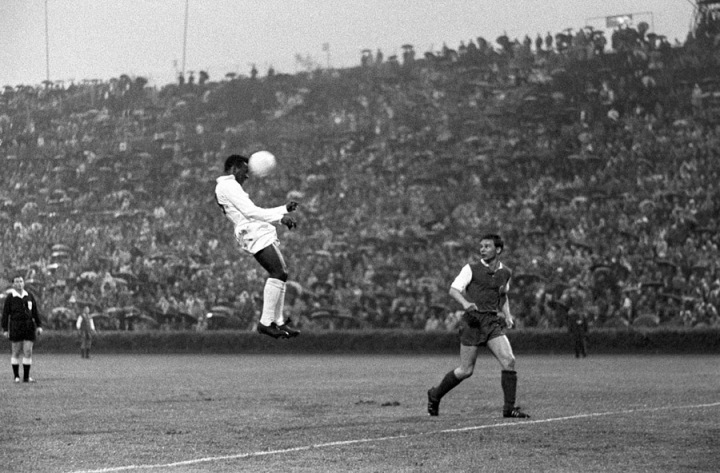 “I compare the Santos 62 team with the national team of Brazil in 70. These are the two best football teams I have ever seen.” That was the view of Benfica and Portugal’s Antonio Simoes, who witnessed, first-hand, the power of the Sao Paolo-based team that was arguably the best in the world between 1962 and 1963.

Santos gave us Pele. They have given us Neymar, who may or may not go on to become a true great. They were ambassadors for the Brazilian game and they also laid the foundation for the Brazil 1970 team that has been the benchmark for every Seleção Brasileira since that hot summer in Mexico.

Such is the myopia of the game that when anyone brings up the subject of football’s greatest club sides, the narrative rarely goes beyond Europe – Ajax, Real Madrid, Barcelona, Bayern Munich and so on and so forth. Because the golden age of Santos preceded the mass media age, the world’s access to Pele and his club team-mates was extremely limited. Yet logically, the country that spawned two World Cup winning teams in 1958 and 1962 surely had to have an outstanding club side or two?

The club remains one of the great “names” of Brazilian football – they were one of the original members of Clube dos 13, a kind of consortium formed to look after the interests of the Brazilian game. And they have never been relegated in their history, which dates back to the day Titanic sunk. But the days when Santos were the nearest equivalent to basketball’s Harlem Globetrotters have long gone, although between 2009 and 2013, they enjoyed a renaissance period that included their third Copa Libertadores triumph.

While Santos heralded this period as the time of the “second Santasticos”, the club will always be better known for the “Os Santasticos” era when Santos won everything, delighted crowds and influenced world football in no small way. It was the age of Pele, Coutinho, Gilmar, Pepe and Zito.

The guiding hand behind this collection of extremely talented individuals was Luis Alonso Perez, better known as “Lula”. He managed Santos between 1954 and 1966 and became one of the most successful coaches in Brazilian football history.
Santos were not a particularly wealthy club – their attendances, even today, trail behind state rivals Corinthians and Sao Paolo. They focused on securing youngsters that had natural ability that could be harnessed to produce exciting, crafty football. While some of these young players were local, they also came from Minas Gerais, Rio Grande Do Sul and Santa Catarina states.

Lula was one of the first true exponents of the 4-4-2 formation and found the perfect player to exploit the role of the slightly withdrawn inside forward, a young lad from Tres Coracoes, Minas Gerais. His name was Edson Arantes do Nascimento, better known as Pele. Within a year of signing for Santos, Pele had been called up for national team duty.

With Pele in the team, Santos won the Sao Paulo state championship – the Paulista –  in 1958 and their new prodigy scored a massive 58 goals. Pele’s own story gathered momentum in the summer of 1958 when he was tearfully part of the Brazil team that won the World Cup. But Santos also had other young players that would make a startling impact. Coutinho was a few years younger than Pele, but after the great man, he is considered to be Santos’ finest player.

Coutinho and Pele were lethal together. It was said that between them, they notched 80% of Santos’ goals. But Coutinho never quite got the international recognition of his more celebrated partner. Pele and Coutinho both benefitted from the wing-play of Pepe, who was also known for his blistering shot. As well as such rare talent as Pele and Coutinho, Lula also brought on youngsters like Dorval, a fast wide man and defensive midfielder Mengalvio. Blended in with more experienced heads, Santos created an irresistible side in the early 1960s.

With Lula in charge, Santos couldn’t help but win trophies. They were state champions eight times between 1960 and 1969 and won six national championships in  that period. In 1962, they won the Copa Libertadores, beating Penarol 3-0 in a play-off with Pele scoring twice. This pitched Santos against Benfica, the European Cup Winners in a two-legged World Club Championship. Benfica had Eusebio, the man who had torn Real Madrid apart (Puskas, Di Stefano et al) in Amsterdam as Benfica won 5-3 and broke the strangehold the Spaniards had on the competition.

It was Pele versus Eusebio, or at least, that’s how the media saw it. The first leg, played in Rio de Janiero in front of 90,000 people, saw Santos win 3-2 but it was the second leg in Lisbon that really awakened the world to this outstanding Brazilian side. Pele scored three times in an hour as Santos ran up a five-goal lead. Only two goals in the last five minutes put some respectability on the scoreline. An aggregate score of 8-4  said it all. And it was no fluke, because a year later, Santos did it again. They had secured a second consecutive Copa Libertadores by beating Boca Juniors in the final, with Pele and Coutinho underlining their value to Santos.

This time, they met AC Milan, with both sides winning their home legs 4-2. In a play-off in the Maracana, Santos won 1-0, but Pele was missing due to injury. Nevertheless, two grand slams marked Santos as possibly the finest club side of their time. In 1962 and 1963, they had won the Brazilian championship, the Copa Libertadores and the World Club Championship.

Pele stayed with Santos until his retirement from Brazilian football. But on the field, Santos found it hard to maintain their early 1960s success. They were never a wealthy club, but they paid their players handsomely to keep Pele and his team-mates together.
By the late 1960s, however, Santos had slipped from their pedestal. In 1962, they had provided seven of the Brazilian World Cup squad. In 1970, this had dropped to five with three – Pele himself, Carlos Alberto and Clodoaldo in the starting line-up.

Santos withdrew from the Copa Libertadores in order to leverage off their name. They became football’s equivalent of the Harlem Globetrotters, taking their prize asset around the world in exhibition matches and prestige friendlies. The word was that Pele’s deal with Santos included part of the fee the club received for such games. They turned up at places like Plymouth Argyle, Fulham and Sheffield Wednesday on their travels, among other destinations around Europe.

It’s worth noting that the reality of Brazilian football, even back in the late 1960s and early 1970s, was far removed from the myth. In 1967, for example, the average attendances in the national league was just 20,000. The nation’s domestic football was invariably disorganised and corruption was never far from the surface. Compare that to the popular opinion that Brazilian football was a heady mixture of happy, samba-dancing fans watching improvisational ball-jugglers.

Santos won many friends around the world, but silverware back in Brazil dried up. Their last national championship for 34 years was in 1968 and even the state titles became rarer. Pele retired in 1974 to join New York Cosmos and the club suffered financial problems on more than one occasion.

In the 21st Century, Santos have won two Serie A titles – 2002 and 2004. This was the Santos of young Robinho, from whom much was expected. But it was the team that wore the club’s colours between 2008 and 2013 that really brought Santos back to the forefront. This young and vibrant team, which included Neymar and Paulo Henrique Gansa, as well as the returning Robinho, won three state championships between 2010 and 2012 and the Copa Do Brasil in 2010.

But the most notable achievement was to secure the club’s third Copa Libertadores in 2011. The cynics might suggest that Santos avoided the big guns most of the way through the competition, beating Cerro Porteno (Paraguay), Colo Colo (Chile) and Deportivo Tachira (Venezuela) in the group stage and in the knockout phase, disposing of Mexico’s America, Colombia’s Once Caldas and Cerro Porteno again in the semi-final.

In the final, they met up with old rivals Penarol, drawing 0-0 in Montevideo before winning 2-1 in Sao Paulo. Neymar and Danilo scored the goals and the former was named player of the competition.

They tried gamely to defend their title in 2012, but Sao Paulo rivals Corinthians beat them in the semi-final. Neymar was soon on his way to Barcelona, heralded as the latest “new Pele”.

Santos today cannot be considered among the world’s best club teams. Indeed, they cannot claim to be the top side in the state of Sao Paolo. In 2014, Santos surprisingly lost the state championship final to little Itauno, the club owned by former Middlesbrough favourite Juninho. And in Serie A, they finished in ninth spot, a fairly consistent placing over the last five years for the club that once dominated Brazilian football.

Currently back in Brazil is Robinho, scoring and creating goals for the Peixe (fish) in the state championships that precede the 2015 national league. Santos are unbeaten in eight first stage games in the Paulista and the former Manchester City and Real Madrid player is among the top scorers.

Anyone who puts on the white shirt of Santos has a lot to live up to. They may not be world-beaters anymore, but as long as we remember Pele, the name “Santos” will always mean something special…and not just down South America way.

3 thoughts on “South American Way: Santos – the club that started the legend”