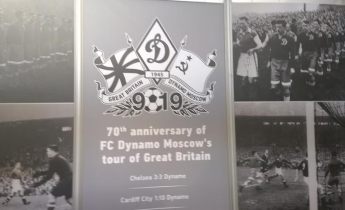 To many students of the game, the story of Dynamo Moscow is all about the 1945 tour of Britain that won friends just as the so-called “cold war” was getting underway.

In the years that followed, Russian football was shrouded in some mystery, although people were aware of the string of Moscow clubs – Lokomotiv, Torpedo, Spartak and CSKA – and players like Lev Yashin.

Dynamo Moscow have arrived in Britain to mark the 70th anniversary of that famous tour. But they are also on a charm offensive, if that’s the right word, to try and raise awareness of the club and Russian football.

Russians have obviously watched European uber-clubs like Barcelona, Real Madrid, Bayern Munich and the English teams start to dominate the continent’s footballing landscape. “We want to build a brand that people can recognise,” said Kirill Khokhlov, head of Dynamo’s commercial department. “We believe there is an opportunity – especially in Britain.”

He could be right, because there are many Russians living and working in Britain, notably in London. Dynamo also has an instantly recognisable logo to leverage, the famous “D” is one of world football’s easily reproduced symbols.

“We definitely want to be in a position where we are challenging for Champions League places,” adds Kholkhlov. “Dynamo has the potential to do this.”

The club is in the process of building a new ground, the VTB Arena. VTB, a Russian bank, is the club’s main sponsor. Dynamo’s old ground was demolished a few years ago and at present the club is playing at Arena Khimki where crowds have been low. But Kholkhlov believes that with the new stadium, the club can attract many more. “The capacity will be 30,000 and we would hope to fill it,” he enthuses.

The new ground will not be part of World Cup 2018 given the restriction on Moscow venues in order to spread the competition nationwide.

Dynamo would hope to be playing a role in the World Cup by providing players for the national squad. There is a renewed emphasis on younger players at the club. “Obviously, we have an eye on the World Cup. The national team needs players to be developed, so we are trying to bring young Russians through rather than focusing on overseas players,” says Kholkhov.