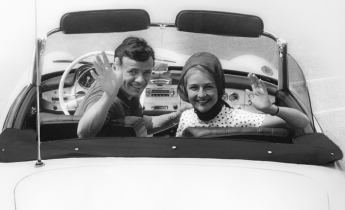 Danish football has its legends. The Laudrups, Alan Simonsen, Peter Schmeichel, Morten Olsen and Preben Elkjaer are written into Denmark’s football folklore. But the man who was really Denmark’s first all-action hero was Harald Nielsen. In August this year, Denmark mourned the death of a player who not only made an impact on the field, but also helped accelerate the adoption of professional football in the country.

Nielsen was 73 years old and had suffered a long illness. He was born in October 1941 and played his early football in his home town of Frederiskhavn in Jutland.

He made his debut for Frederikshavn in 1959 and helped them to promotion in 1960, scoring prolifically. But it was the Olympic Games of 1960 in Rome that really made Nielsen’s name. Playing for Denmark’s amateur team, he scored six goals in the competition and was pivotal in the Danes winning the silver medal.

Denmark won all three of their group games against Argentina, Poland and Tunisia. Nielsen netted twice in the 3-2 victory against the Argentines and the 3-1 success against Tunisia. He also scored one against Poland. In the semi-final, he grabbed his sixth of the tournament as the Danes beat Hungary 2-0. In the final, Yugoslavia proved too strong and won the gold medal by 3-1.

Nielsen had made his mark, but his international career was almost over. He had scored 15 goals in barely as many games for his country, but bigger clubs than Frederikshavn were eyeing the dashing Dane. He was only 17 when he made his international debut, scoring in a 4-2 win against Norway in Oslo in September 1959. Given Denmark, essentially, was a nation that still adopted the ideology of the Corinthian, he would not be allowed to play for the national team if he turned professional.

Nielsen and other members of the Olympic team did indeed turn professional, in his case, he moved to Bologna in Italy, a nation that had already plundered Scandinavia for talent. Sweden’s Gunnar Gren, Gunnar Nordahl and Nils Liedholm, known as the Gre-No-Li trio, played for AC Milan in the 1950s.

Nielsen scored on his Serie A debut for Bologna on August 27 1961 against Palmero and in his first season, netted eight time in 16 games. A year later, he was top scorer in Serie A with 19 goals and then in 1963-64, he spearheaded Bologna’s seventh (and most recent) Scudetto. Nielsen scored 21 times and then in the title play-off, he grabbed the clincher in a 2-0 win against Inter.

For a while, Nielsen was the golden boy of Italian football – he was nicknamed “Gold Harald” – but in 1967 he joined Inter and later, Napoli and Sampdoria, where injuries blunted his effectiveness. In Bologna, however, the team that won Serie A is still revered. Denmark’s stubborn refusal to allow emigrant players to turn out for the national team meant he never played for his country when he was at his peak.

After his career was over, Nielsen was a successful businessman, but he pushed for Denmark to introduce professionalism to its domestic football. He worked with Helge Sander, a journalist from Herning in Jutland, to encourage a revolution in Danish football. Sander, who later became Denmark’s Minister for Science, was the man who lured Bobby Moore to play for Herning Fremad, a tiny, unsuccessful club. Sander saw the England World Cup skipper as the man to be the figurehead to change the face of the Danish game. It didn’t work, but in 1978, Nielsen and Sander’s efforts led to professionalism finally being adopted. The seeds of Denmark’s success in the 1980s and early 1990s were laid.

Harald Nielsen’s passing was big news in Denmark, “Our beloved chairman and partner has died,” said one of the companies he was involved in. “We will miss Harald every day”.

There’s no doubt that if Nielsen, and some of his peers, had been allowed to play for Denmark in the 1960s, the Danes would have been far more successful. But his omission arguably inspired others to advocate change. His influence certainly extended beyond his playing days.