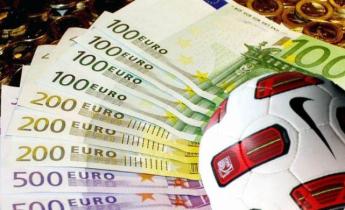 IT’S NO SURPRISE that the Premier League is the biggest spending football league in Europe, but what will raise some eyebrows is that Italy’s Serie A has the second largest wallet.

The average cost of an English Premier team was EUR 171.9m in the financial year 2014. Some clubs are way above that figure, however – Chelsea’s original squad cost was EUR 498m, Manchester City’s EUR 526m, Manchester United EUR 495m and Arsenal EUR 297m.

Italian Serie A clubs spent EUR 2.1bn and the average cost of building a squad was EUR 107m. This represents 1.2 times the total revenue, a figure that is only equalled by the Ukraine and exceeded by Portugal.

Despite Italy’s declining position in European football, there are six Serie A clubs that have spent more than EUR 200m in building their squads, including Inter (EUR 329m), Juventus (EUR 300m) and Napoli (EUR 205m).

It’s quite astonishing to see that Spain’s La Liga clubs have an average squad cost of EUR 73.6m, representing 70% of revenues. Spain’s top division spent a total of EUR 1.5bn on transfers in 2014. Needless to say, Europe’s most monied club when it comes to transfers is Real Madrid – some EUR 629m in 2014. Germany is the fourth biggest average cost of squad at EUR 57.1m and France is next on EUR 51.8m. Given the success of Bayern Munich in the past couple of years, it does suggest they are getting better value for money than their English counterparts.

Although it has been reported that transfer spending is on the increase, the EUR 11.3bn spent by Europe’s top 15 leagues is part of a trend whereby clubs are decreasing their net spend on transfers relative to wages and revenues – from 127% in 2010 to 115% in 2014. During the 2010-14 period, this has decreased every year.

Outside the top 15 leagues, average club squads have been built for less than EUR 1m, although in a number of other countries (Bulgaria, Croatia, Greece, Israel and others), the average rises to between EUR 1m and EUR 2.5m.