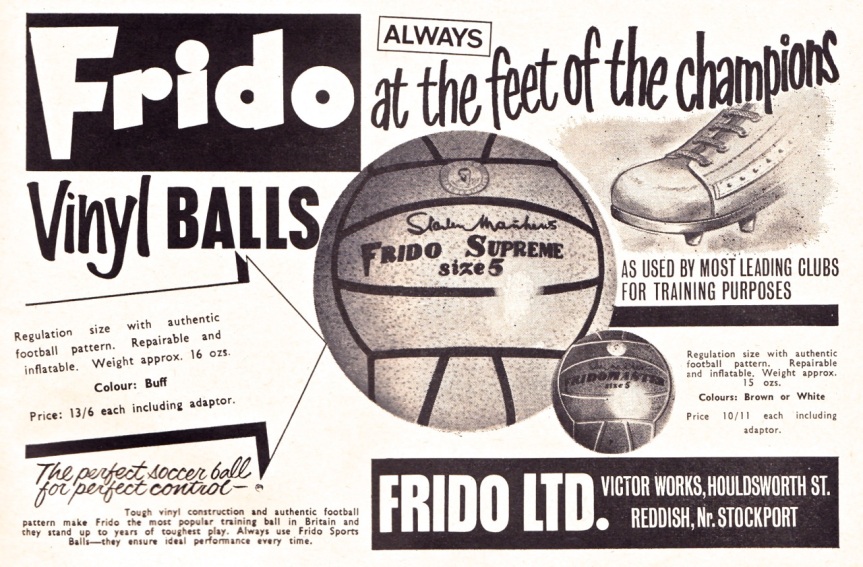 ALL OVER the world, kids play football wherever they can. Flannel-shorted Scallywags in old, Victorian-built cities and towns  used the street for a pitch, tackling amid a landscape of drains, lamp-posts and parked cars.  Garage doors, barns and chalk-scrawled walls have been used as makeshift goals. And of course, there’s always been “jumpers for goalposts”.

Even if you lived in a relatively rural environment, with playing fields available for a kick around, unlikely locations would provide the stage for a game of football.

Our “home ground” was the allotments at the rear of West Road, South Ockendon. In the late 1960s and early 1970s, a patch of semi-derelict market gardens gave us a rough and ready football pitch that was just about big enough for four or five kids to play around on.

We would use whatever we could to form a goal – the most frequent being a discarded rusting bedstead of the old kind that had long been abandoned in the stinging nettles. We would prop it up and that would be our improvised goal, the “chassis” acting as a highly-sprung goal net.

Some of the best football I saw in the late-1960s was on the West Road allotments – Mr W. Grey, West Road resident

Often, we would have an audience – the bronchial tones of “Mr Grey”, leaning on his fence, flat cap on his  head, could often be seen poking his nose through the trellis. Mostly, however, we would face the prospect of being shouted at by an allotment owner who begrudged the odd Frido ball landing on his lettuces or cabbages. Further afield, we would catch a glimpse of the odd pig in the sty –  just a goal-kick away.

Our line-up was usually the same. On the end of the row at number 70 was Colin, a brow-beaten child with tombstone teeth and an over-bearing mother, who wielded the “copper stick” like a lethal weapon. If Colin misbehaved, she would take him to task with the stick. Colin was not much of a footballer, but he was determined, and didn’t mind going in goal. Then there was James, one of a multitude of kids from number 86. He was a tenacious player, and he could always be relied upon for a football (something of a scarce commodity). He didn’t like losing.

The three of us from number 76 made up the balance. There was Robert, energetic and wayward, not to mention a bit dirty in the tackle. His twin, Richard was a decent goalkeeper and good at throwing the ball. As for myself, I was brilliant, two-footed, good in the air, visionary with my passing and, to make me the complete player, I had the ability to spring, gazelle-like from box-to-box. I also had the shooting power of Peter Lorimer and, like Martin Peters, Sir Alf thought I was “10 years ahead of my time”. The allotments were too small a canvas for such an artist.

Then I woke up and there I was, starting at the allotments’ backdrop of hump-back bridge, terraced railway cottages and factory rooftop. The classic industrial landscape for a football ground!

My key role in the exercise was as time-keeper for our short-sided games. I would estimate the time lapsed and remaining for our “five minutes each way” fixtures.  Sometimes, the last minute would seem to go on for ever, or until I equalised for my team. Rolex and Omega had nothing on me.

The surface could be quite treacherous. Allotments are rarely flat and there would be the odd dip that would result in a foot being turned or an ankle twisted. And if you were really unlucky, you might land on some thistles or even dog shit. Nettles were always a problem, so a good supply of Dock leaves was always at hand.

The most hazardous obstacle, however, was Mr Nolan or Kevin Haydon. Grumpy Irishman Nolan owned a lot of the allotments and made a living out of selling his produce. This was no part-time gardener, this was a businessman. If a ball landed on one of the many plots he rented, he would either confiscate it or throw it back under condition. That was better than the outcome if Mrs Sparks got hold of a stray spheroid – she stuck in a knife in our ball on more than one occasion. As for Kevin Haydon, he was Mr Nolan’s grandson and slightly deranged. He once claimed he was born of poultry, which prompted us to adapt the famous Lee Marvin song of the time, “Wandrin’ Star” to “I was born in a chicken egg”.  He was a vicious bastard was Haydon, and Richard still has a scar on his head that was caused by a stone thrown by at him by West Road’s l’enfant terrible.

The allotments were our back street arena, hosting some classic games: Chelsea 26 (Peter Osgood 18, Neil Jensen 8) Tottenham 25 (Pat Jennings [Richard Jensen] netted 21 of Spurs’ goals); Liverpool 6 Morton 36 (Joe Harper 31 goals – possibly the game that earned his move to Aberdeen); West Brom 11 West Ham 11 (Clive Clark hat-trick for WBA); and, in our re-enactment of the entire 1966 World Cup in one weekend, North Korea  5 (Robert Jensen 3, Colin Clark, Mr Nolan throwing the ball back and accidentally scoring) Uruguay 2 (Pedro Rocha and a strange shot by James Shortall that ricocheted off Rog the tortoise) at Wembley. The people of Pyongyang never really thanked us for that.

Our theatre of dreams is still there, but like all old stadiums, Allotment United’s ground now looks very tired and inaccessible. Cars have parked on the pitch down the years and security fencing fringes the site. The last time I visited, I walked onto the imaginary centre circle. I looked around, bent down to feel the grass and mumbled to myself: “There used to be football played here.”

2 thoughts on “Allotment football and a bed spring goalmouth”