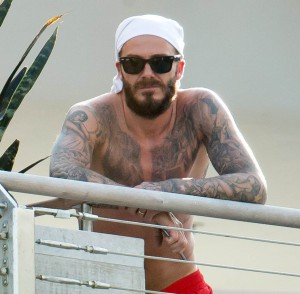 WORLD SOCCER’S series of specials on the top clubs and players  – Barca, Real, Liverpool, United – lost a little bit of credibility this week with a whole magazine devoted to David Beckham. In the corridors of European football, they must be scratching their heads. Why? – when there are so many other riches to choose from.

Beckham, for all his photo opportunities,  does not represent –  past, present or future – football played at the highest, most sublime level. He took a good free kick, crossed the ball well, knew how to celebrate a goal and looked good in the line-up, but essentially, he is the face of a “brand”, a well choreographed celebrity that never lets an opportunity for media exposure pass by. As Sir Alex Ferguson said, “Beckham lost the chance to become a top-dog player”.

Beckham was successful in using his football career to become extraordinarily famous and one of the most talked about figures in the celebrity world.  And his wife has also established a post-Spice Girls career that now includes a “fashion empire”. The couple are admired by aspirational working class people and courted by similarly media-hungry celebrities. It’s a superficial world, as they say.

Before we discuss Beckham’s latest revelation, you have to say that the east Londoner has never dragged football into disrepute in the way some of his contemporaries have. He’s mostly been the model of decency, although his constant preening (haircut after haircut), attention seeking (boot-gate) and conspicuous consumerism (thrones and all that) have been irritating.

So too is his comment in the media that he prefers watching rugby to football. This could well be the next flag of convenience for the former England captain. True, there is a lot to be concerned about in the game of football these days – the FIFA debacle, the inflationary wages, ticket prices, agents and player contracts. Supporter behaviour is also a worry in some quarters, but far less than in the past. Beckham now appears to be hanging his [designer] hat on the oval ball.

Rugby and football have always had different demographics, largely built on the origins of the two sports and the education system. A former England rugby international, when playing for a top London club, shared a training ground with a top Premier League club. His view on football, and the attitude of the players, was not positive. “A bunch of ignorant arses,” was how he described them to me. The average rugby crowd is certainly not the same as the football masses, although there has been some convergence. New money (an appropriate tag for Beckham and his kind), for all its material possessions, generally stays with football rather than rugby, but I am cynical, and I think there’s more to Beckham’s statement than meets the eye.

Only recently, Beckham’s son Brooklyn failed to earn a scholarship at Arsenal’s academy, while another son, Romeo, told his father he wants to give up football. On the latter issue, Beckham said he was “devastated” but has since added he was “relieved”. Now, Beckham says he is into rugby. Linked, in any way?

As my own son has often joked with me, “I am posher than you, Dad”, referring to the benefits he has derived from my own limited efforts at social climbing (!). It’s a fact that even remotely successful working class folk pass on a better lifestyle to their offspring and that allows them to step a rung or two up the ladder. Doubtless, the Beckham tribe is having a privileged upbringing, but it could just be that football doesn’t appeal to them given the many distractions provided by celebrity parents. I wonder if young Brooklyn or Romeo, apart from lambasting their Mum and Dad for giving them names that create just as much attention for the parents  as the kids themselves, consider they are indeed, “posher than posh”?

I think public approval of rugby could be no more than Beckham seeking applause from a fresh clientbase – exploring a new market. He’s popular with the credit card-wielding wannabees, he’s buddies with the Hollywood set that craves publicity, and there are few football doors that remain closed to him. He is unlikely to go into management, though, because there is always the high chance of failure.

There’s a whole section of society that will never see Beckham as anything other than a former footballer in expensive clothing, however personable he may be – the genuinely middle classes. It is not uncommon for the nouveau-riche to discard or deny their past, but it is unusual for a football person to abandon his game for rugby. Beckham’s not doing that, but he’s suggesting that football crowds are unpalatable compared to their rugby cousins – no doubt from the vantage point of an executive box.

He should be careful, though. After all, there is no way Beckham would be Beckham without the mass appeal of football and the crowds that have idolised him. He’s played for Manchester United, Real Madrid, AC Milan and Paris St. Germain in building the Beckham brand. He could not have achieved the same type of profile as a rugby player!

Beckham, arguably, is right in his assessment of crowds and the culture of the game, but this is someone who has made a fortune out of football and also hosted coaching schools. He has just completed a charity-driven whistle-stop world tour playing games in every continent – in front of those gruesome football crowds. He usually chooses his comments carefully, but his latest press campaign could be misinterpreted by people who have bought into the myth and legend.

What next then, the David Beckham Rugby School?