Beneath the floorboards…a poignant reminder of Munich ‘58

OLD STAN was a Manchester United supporter dating back to the second world war. He had seen United at Maine Road when football resumed and, like many others, threw his cap in the air at Wembley in 1948 as Matt Busby’s team won the FA Cup. He had been thrilled by the Best-Law-Charlton era at Old Trafford and he wept as United won the European Cup in 1968.

The modern era had given him little. Stunned by relegation, the Tommy Docherty team of 1975-77 went close to earning the right to look the teams of the 1950s and 1960s in the eye. When the subject of the 1950s came up, he shook his head, discreetly brushed moisture from his cheek and looked up at a small framed photograph of United’s lost generation that perished in the snow of Munich.

Stan was having some work carried out on some floorboards in his master bedroom. The workmen had to lever them up and as they ferreted around looking for clues, they came across a bundle of newspapers.

Unfolding the carefully preserved but brittle and yellowed pages was the sports section of the Daily Express, dated February 6, 1958. It included a match report by Henry Rose: Red Star Belgrade 3 Manchester United 3.

That day, Rose was among the party involved in the Munich air disaster. An ebullient and much-loved figure among press colleagues, and capable of colourful prose that illuminated any sporting event, Rose had filed his report for his newspaper and on his way home, was sent to his death along with eight United players and other press colleagues. It was the last piece of work Rose ever produced.

Old Stan picked the paper up, hands shaking and tears welling-up in his tired eyes. “I kept this to remember that lovely bunch of lads,” he said. “And I never knew what happened to it. It’s been here all these years.”

The story of Munich is well known, but a copy of this match report, which Stan gave me, has remained tucked away in Breedon Book’s Complete Record of Manchester United for almost 30 years.

“Busby boys beat fans, referee, and Red Star”, claimed the headline. Henry Rose said United had added another page to their glittering history in winning 5-4 on aggregate against Red Star.

Stan had seen United win the first leg 2-1 in Manchester. “Red Star were a good team. A very good team, but they were also a bit dirty.”

Rose seemed to confirm that, suggesting that the referee, Karl Kainer from Austria, was very selective in his decision-making. “Some decisions were double-Dutch to me,” said Rose.

United raced into a 3-0 half-time lead in Belgrade, but despite the undoubted skill of Busby’s side, they were sometimes vulnerable when in front. Before travelling to Belgrade, they had met Arsenal at Highbury and sneaked home 5-4 after leading 3-0.

What’s more, Red Star had a very talented line-up. Almost all of the team was capped by Yugoslavia, including full-back Novak Tomic, the versatile veteran Rajko Mitic, attacking midfielder Dragoslav Sekularac and striker Borivoje Kostic. Rose said the latter two were worth £100,000 in the transfer market – some years before that figure was reached in England. 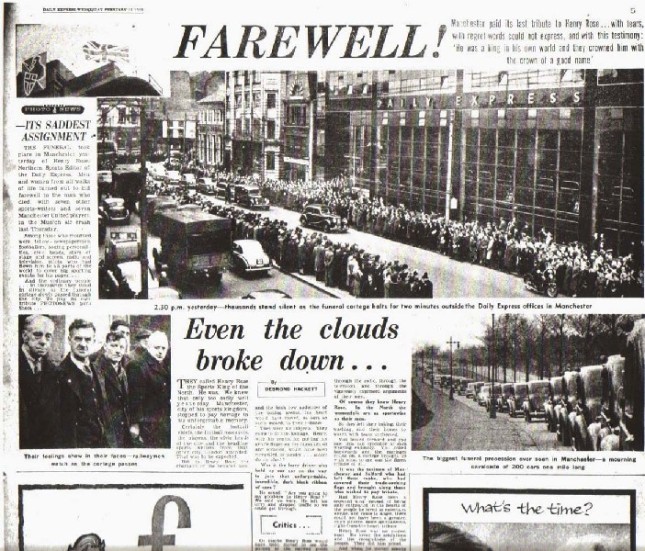 The game ended 3-3, enough to send United into the semi-final. The party was in high spirits, but on the return flight, five of the 11 that lined-up in that match were killed in Munich: Roger Byrne, Eddie Colman, Mark Jones, Duncan Edwards and Tommy Taylor. Three others, Geoff Bent, David Pegg and Liam Whelan were also killed.

“We didn’t know what to say or do,” recalled Stan. “A lot of us went along to Old Trafford to just stand and look at the ground. You have to remember that this team was very young, they had grown up together and they were a symbol of everything that was modern about the game of football. I also thought that England would have won the World Cup before 1966 with some of these players. But we will never know that.”

As for Henry Rose, his funeral was one of the largest among the Munich victims. Desmond Hackett, Rose’s colleague at the Express, commented: “Even the skies wept for Henry Rose today.”