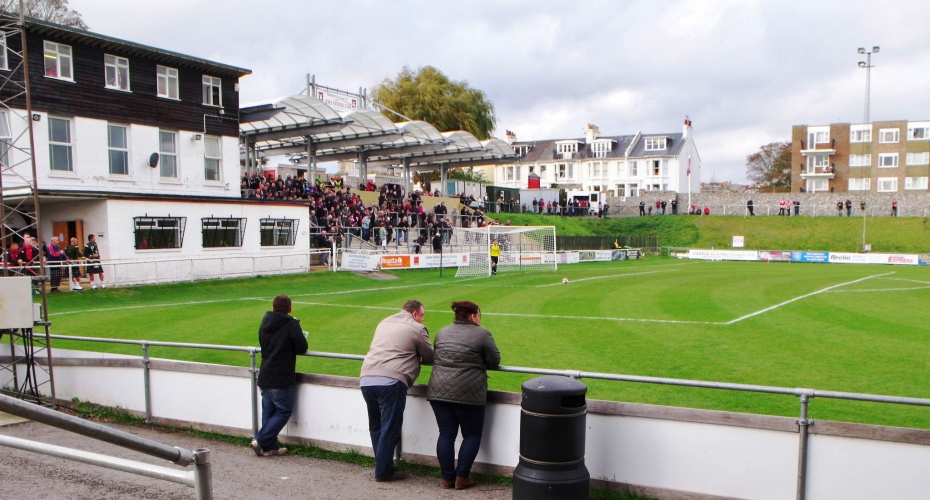 YOU’VE probably seen their posters:  imaginative, humorous, intelligent and a little bit cheeky.  The good folk of Lewes have definitely made a splash in non-league football over the past few years, to such an extent that the club’s influence can be seen now all over the land as others “push the envelope” when it comes to the decades-old medium of fixture posters.

Lewes, after something of an Icarus effect in the past, are one of the growing band of supporter/community owned clubs. Only this past week, Grays Athletic announced they intend to go down this road themselves. They could do far worse than give Lewes a call.

This week, it was my privilege to travel down to Lewes to speak at an event that coincided with the launch of a book about the 1966 World Cup. It was hosted by the local Labour Party, so politics were never too far from the surface. Lewes chairman Stuart Fuller, of The Ball is Round fame, was one of my fellow panelists.

Fuller presides over a club that has a healthy list of owners. The idealists among us would like to think that football has always belonged to the people but unless a club is actually “owned” by the supporters, the truth is the game is not really the property of “the people” but a product that is used to entertain (and sometimes exploit) the masses. And it is notable that when football has been used for political gain, the right wing has often been more successful than the left – Mussolini in the 1930s, Franco in the 1950s, the Junta in 1978. Just consider that when the European Cup was first introduced, clubs from dictatorships were the most successful!

The Romans invented the term “Bread and Circuses” which meant providing food and entertainment to curry favour with the poor and win their votes. Football, in some ways, has been used in much the same way throughout history. In a more benign way, industrialists, mill-owners, butchers, bakers and candlestick makers backed local football to appear as paternal, caring philanthropists. But many of them treated the man on the terrace with mild disdain and given that, for decades, nobody did anything for spectator comfort, was this really serving the people who “owned” the game? I recall one chairman saying, “We would get 10,000 in the ground by just switching the lights on – that’s how fanatical they are.” That wasn’t necessarily a compliment!

In non-league football, too many clubs have relied on the generosity of local businessmen who, in return for their money, were given the keys to the kingdom. Many see the man in charge as being responsible for the “Bank of Mr Chairman”, who puts his hand in his pocket every week to keep the club going. And then there’s the cash injection provided by an “investor” that gives a club the short-term fix that propels them up the ladder of success. It’s a free market, yes, but is this what non-league football should be all about? Of course not.

That’s why we should applaud any club that takes the brave decision to allow the fans to become owners. It’s brave because it doesn’t always translate into instant success. Take Lewes, for example. They were relegated in 2015-16 and doubtless the sceptics will question their model, but they are still getting 400-plus people from a town of 17,000, which is no mean feat. There’s clearly interest in the club.

Football at the highest level is the plaything of big business, big global business. Non-league football should be in the possession of the people that are the true patrons of the game at this level – those that care passionately about the hundreds of small clubs up and down the country that are, effectively, real community assets. Stuart Fuller and his colleagues at Lewes, however pained they might have been by relegation, should keep telling themselves that they are doing it the right way!  And good luck to  Grays – I cut my non-league teeth with the Blues, so I have always had a soft spot for them.