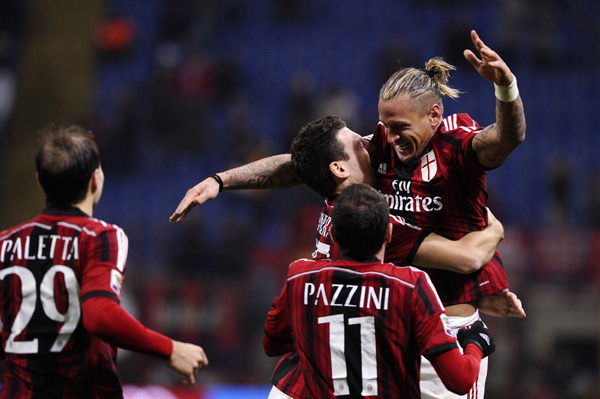 IT HURTS clubs like Inter, AC Milan, Liverpool and Manchester United to be excluded from the UEFA Champions League, especially in this age of bloated elitism. There was a time when you had to earn a place in UEFA’s leading club competitions, either by winning your domestic league or cup or, if you finished second or third, you might get a UEFA Cup berth. But there is too much “entitlement” in the game today.

But never mind, because the corporate world is trying to change that. With television having a massive influence on the structure and scheduling of football matches, and big business throwing vast sums of money into the game, UEFA ideally wants its best clubs – i.e. those with commercial currency – to be involved year-in, year-out. They’ve almost got to that stage, but we have seen a number of clubs fall from their lofty pedestals in recent times. It would have been unthinkable 10 years ago to suggest that Inter and United might fail to play in the top competition. And you can almost see the discomfort on the face of Jose Mourinho as he contemplates his debut season at United in Europa League.

There’s nothing that the so-called footballing aristocracy hates more than “Johnny-come-latelies” threatening their position at the top table. Old money has long complained about recently-monied clubs benefitting from inflated financial investment, ignoring the fact that their 50,000 crowds give them incredible advantages over a club that has a 20,000 audience. “Know your place” seems to be the message that has been perpetuated for decades.

But if the plans of China’s Dalian Wanda are successful, the European football landscape will change dramatically and a new competition, doubtless aimed at TV audiences, will bring together the traditional powerhouses. If it happens, it will probably signal the end of the UEFA Champions League as we know it.

Naturally, clubs that feel they are missing out on the opulence that the UEFA Champions League creates will welcome any competition that restores their place at the trough. But should Wanda’s audacious bid to disrupt come to fruition, we will have to think seriously about the true meaning of competitive football, if not competitive sport.

The game used to have an unpredictable side that, over the decades and due to the financial clout of the big clubs, has been almost eradicated. Just look at the league winners of the major European leagues to see that the element of “fantasy” has almost been wiped out. Thank goodness for Leicester City. The big clubs, TV and some of the football authorities do not really like the element of the unexpected. Leicester will not command the TV rights and commercial opportunity of a Manchester United, so they will never be seen as a “must” for SKY, BT and UEFA (to name but three).

Doubtless Wanda see this move as another step towards making China a football force, but actually, if they deconstruct European football, they will be seen as a negative force that failed to understand the true culture of the game. By merely suggesting that an alternative to the current structure – involving the “big fish” regardless of their current status – they are driving a stake through the heart of football’s raison d’etre.

Elitism in football has, historically, been achieved through playing success, not through the manufacturing of artificial leagues formed through commercial opportunism. While accountants and club presidents from those involved will be happy, supporters will surely not back such a venture.

Wanda have been talking to six leagues, presumably England, Italy, Spain, France and Germany plus Holland or Portugal (don’t rule out Russia, though). The company has said that their rival to the UCL will be more attractive to broadcasters and will yield 30%-plus more in revenues.

As it stands, any club or player that takes part in a “rebel league” risks the wrath of both FIFA and UEFA, but with dissatisfaction at an all-time high concerning both, the introduction of a new structure could mortally damage these bodies. UEFA, for example, could not afford for a Real Madrid or Bayern Munich to go missing from its arsenal of blue riband clubs.

Wanda have shown they are a determined organisation having acquired a 20% stake in Atletico Madrid and in March, the company agreed a deal with FIFA to sponsor the next four World Cups. Wanda’s chairman, Wang Jianlin, is one of the world’s richest man with a fortune estimated at USD 29 billion. UEFA should be worried, because men like Wang invariably get their own way, but let’s hope that the spirit of the game prevails and that teams earn their place among top competitions on merit and not because their name is bigger than their current position in European football’s pecking order. It could set a dreadful precedent.