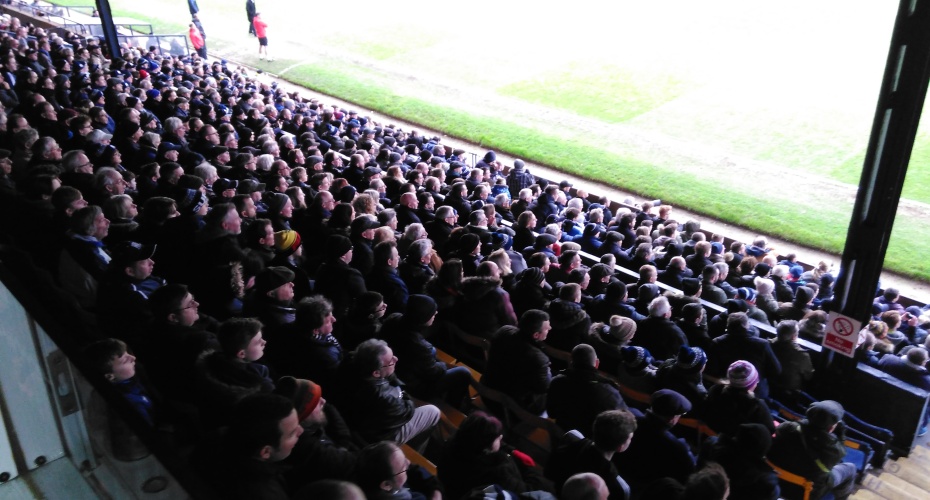 SOUTHEND used to be all about the “lights”, jellied eels, the nightlife, “kiss me quick” hats and a paddle in the freezing cold sea. From a football perspective, Southend played on Friday nights and they had one Billy Best in their line-up. The Kursaal, an amusement park, once played host to legendary rock bands like Queen, Deep Purple, Mott the Hoople and Black Sabbath.

Roots Hall is one of those old fashioned football grounds that used to proliferate the third and fourth divisions of the old Football League structure. Big floodlights that can be used as pointers to the ground’s location and barn-style stands. It still has a somewhat homely feel to it, in an austere 1950s way. Southend’s home since 1955, it looks set to be consigned to history when the club moves to a proposed new site at Fossetts Farm. Roots Hall is surely a housing estate waiting to happen.

It won’t be the only new building going up in Southend in the coming years, for there’s a redevelopment plan in process called the SCAAP (Southend Central Area Action Plan), which will change the face of the town centre and seafront. At present, around 18% of retail units in the centre are empty. Like many towns in 21st century Britain, there appears to be a problem in adapting to changing consumer patterns.

A new stadium for Southend United will offer the chance for the club to step-up a gear but not everyone is happy about the prospect. There are plans for a shopping centre and considerable housing, but critics of the scheme suggest that this would be the death knell for the town centre.

Southend-on-sea, like many seaside resorts, has suffered from shifting demographics. It has a population of 178,000 and it is relatively close to London. It’s a densely populated area and many of its occupants are former Londoners or have London ancestry. It is therefore a town ripe for football.

Fossetts Farm will include a 20,000-plus stadium that will be less than two miles away from Roots Hall. Like many clubs that have moved to new sites, it could result in increased interest in Southend United and perhaps bigger crowds. Forty years ago, Southend were averaging 5,500 at their home games, in 2016-17, gates are around 6,600. When Southend reached the Championship, they pulled in 10,000 per game, which shows that there’s potential to move the needle.

Southend United are enjoying a good season in 2016-17. Before meeting Charlton Athletic on New Year’s Eve, they hadn’t lost in Football League One since October 8. They had a poor start to the campaign, losing their first two games, but they recovered and mounted a challenge at the top of the table.  The locals are starting to believe they might have a chance of the play-offs and the crowds are steadily growing again – 8,500 saw them beat AFC Wimbledon 3-0 and for this game, Roots Hall was almost at capacity – 10,329.

Charlton brought plenty of support from South London. They’ve taken their time to adjust to life in League One after relegation but they gave new manager Karl Robinson his first victory when they won 1-0 at MK Dons on Boxing Day. That must have been bitter-sweet for Robinson as he was sacked by the new town club in October. Ironically, Robinson’s last 90 minutes in charge in Milton Keynes was a 0-3 home defeat at the hands of Southend – a game that was covered by Game of the People.

Roots Hall is a friendly place and there’s no airs and graces about it. It was interesting to see comedian Jim Davidson in the next box to our party. He’s a lifelong fan of the club and even named one of his stand-up tours, “Charlton Nil”.

That’s exactly what the score was for much of the afternoon. Southend, playing some lively football, led at the interval 1-0, their goal coming after 12 minutes from Simon Cox, who shot home from close range with a left-foot drive into the top right-hand corner of the net.

Southend almost went two ahead on the hour when Stephen McLaughlin struck the woodwork with a shot from the edge of the area. But there were signs of a Charlton revival and in a purple patch, Fredrik Ulvestad and Morgan Fox were both denied by superb saves from Southend keeper Ted Smith. Then Charlton’s Joe Aribo hit the bar with a fierce effort from the right hand side of the area. You started to wonder if Southend had done enough to win the game and on 89 minutes, the answer came – Aribo crossed and Andrew Crofts shot high into the net, a lovely finish to make it 1-1, the final score.

In the end, it had been an entertaining 90 minutes and a decent atmosphere. The point keeps Southend’s run bubbling along, but the draw was about right – and even Phil Brown agreed with that in his post-match analysis.

What was evident at Roots Hall was the buzz that traditional stadiums can still create. That is the challenge for all new ground developments. While new homes that meet modern requirements are the way ahead, you cannot beat the hum of an old English football ground. It was good to return to Roots Hall before it disappears.