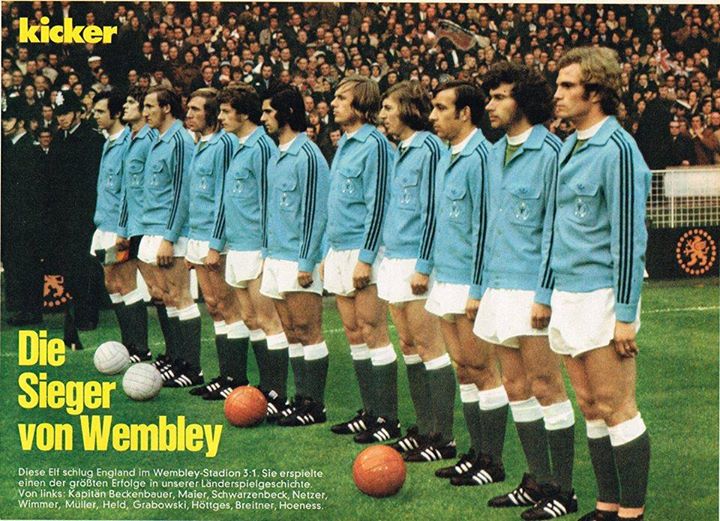 TO SOME people, the year 1972 was one of the finest in post-war football. The Football League title race was one of the most engaging of all time, with Derby County coming out on top, beating off the challenge of Manchester City, Leeds United and Liverpool. In Europe, Ajax Amsterdam were in their pomp, winning a second successive European Cup and the European Football Championship saw an exciting West German team win the competition for the first time.

Three years on, Vernon said that 1972 had been a “vintage year” for Europe and once again, named his team of the past 12 months. Only four players remained from the team for 1969: Beckenbauer, Moore, Bremner and Muller.

“It was a year – an extremely busy one at that – which saw he emergence of West Germany as a true world power and the continued brilliance of Ajax,” said Vernon. “The fast, hard-tackling Germans have managed to combine these qualities with sparkling, inventive play and the ‘total football’ of Ajax incorporates the best features of central European and British styles.”

Vernon’s team included Tottenham’s Pat Jennings in goal. “I have not seen anyone better during the year. The big Irishman has a perfect sense of positioning, he catches the ball cleanly, is brave and extremely fast off his line.”

The right back was almost selected by default. “In the absence of a truly outstanding right full back, Miklos Pancsics gets the number two shirt,” said Vernon. Pancsics won Olympic gold in 1968 when Hungary were champions in Mexico and then in 1972, in Munich, he picked up a silver medal. Ironically, he was a central defender with Ferencvaros.

Franz Beckenbauer was selected as sweeper, described as “the great all-rounder”. His Bayern Munich and West Germany team mate, Paul Breitner was called “the discovery of the year”.

Vernon admits to staying “faithful to the indestructible Bobby Moore…still one of the best passers of the long ball…times his tackles to perfection”.

Billy Bremner, now at his absolute peak, was called “tigerish” and was seen as the ball winner in midfield. He was listed alongside Borussia Moenchengladbach’s Gunter Netzer, “the central linkman in my European team…the perfect goal maker as well as a potential goal-getter”.

Vernon also names Sandro Mazzola for old times’ sake. His Inter Milan side failed to seriously test Ajax in the 1972 European Cup final but Mazzola was described as “an untiring inspiration”.

Johan Cruyff, the man who scored both Ajax’s goal in that final, needed no introduction. “He is the ideal all-purpose forward, inventive, dangerous, elusive and a delight to watch”.

The man who denied Cruyff a World Cup winner’s medal two years later, Bayern Munich’s Gerd Muller, was the centre forward of the team. “The goalscoring wonder of our age”.

Finally, Vernon named another Dutchman, Piet Keizer, ahead of “the aloof” Dragan Dzajic of Red Star Belgrade, “the inconsistent” Cagliari striker Luigi Riva” and the “clever, but slow” Sándor Zámbó of Ujpest Dozsa.

A fine selection with some legendary players. Anyone fancy valuing that lot in today’s monetary terms? A vintage year indeed – and only one Englishman which you can probably thank West Germany for!