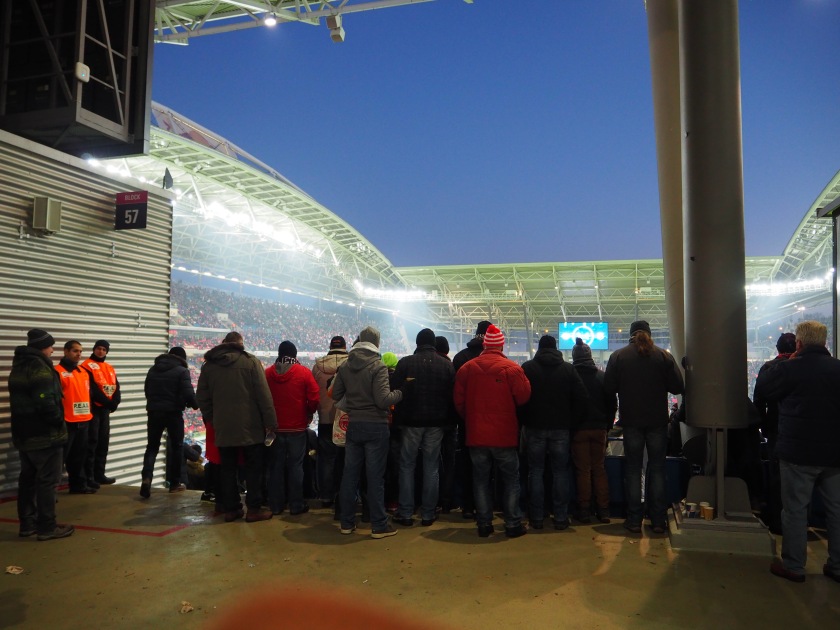 I’VE recently returned from Leipzig, which has suddenly become a very vibrant city with lots of interesting things going on, from both a social and economical point of view. From a football perspective, the progress of RB Leipzig has attracted a lot of negative attention in the media  – the club created and run by Red Bull. We could talk all day about the wrongs and rights of the way Red Bull have cleverly got round the rules in Germany, which while ticking the box to a certain extent, has upset the rest of German football. As the supporters of Bayern Munich, Borussia Dortmund and others protest about the structure of RB Leipzig, the club’s new-found support base is delighted at having Bundesliga football in the city once more.

At the same time, traditional supporters of football in Germany’s fastest growing city, are outraged. I’m referring specifically to the fans of Lokomotive Leipzig, a club we associate with the old DDR, but one that has dropped dramatically from its pre-reunification position. “Lok”, as they are known (pronounced Lock), play in the regional league but they remain quite well supported and their fans – who have not always had good press – are passionate.

It is certainly true that RB Leipzig’s model is very different from the purist and more cultish position of Lok.  RB are a young “manufactured” club that represents the very essence of corporate football that fans at clubs like Lok, and indeed non-league clubs in Britain, largely reject. But just what is the right model? It is clear that big-time football is part of the financial system across the globe – sport contributes around 1% of global GDP, of which football is a big part. If you think about that, it is quite astonishing that a game can command such importance. More relevantly for non-league fans, what is the right structure for the game at non-league?

People talk about “level playing fields” and quite frankly, they’ve never really existed in football. Football is all about meritocracy – the rich invariably are more successful than the poor. Is it level to have a club with an average crowd of 75,000 playing against a team that can only muster up 18,000? Sponsorship, inflated investment, corporate backing attempts to flatten that playing field, but the traditional clubs that have enjoyed positions of superiority don’t like any moves to change the order unless it is on an organic basis.

In non-league football, clubs with inflated investment are almost always despised by their rivals. We have seen some pretty ridiculous scenarios where village clubs suddenly get stacks of money courtesy of an ego-driven businessman. It works for a while, but when the plug is pulled the club drops as fast as it has risen. But like RB Leipzig’s new audience, if you’re the recipient of such an enterprise – foolhardy as it often is – most people don’t care too much.

There should be a place for all kinds of football models, if every club was exactly the same, the pecking order may never change. I’ve long been an advocate of supporter-owned clubs at non-league level, but I also feel that this type of club can only thrive if every club has a similar structure – and we are back to Germany again.

However, the fact that football can co-exist with various club models does make the game more interesting. I recall when Team Bath were playing in the Southern League that a lot of people hated them, and no doubt the vitriol directed towards them contributed to their demise. I wonder how a team from Oxford and Cambridge Universities, like Pegasus back in the 1950s, would be received today? At the time, I believe Pegasus were highly respected, but were also a curiosity. That’s how I saw Team Bath- something unusual, a departure from the norm.

I think there’s room for many different models to co-exist, but above all, whichever one you choose, it should be transparent, accountable to the people that pay to watch the product you’re putting on the field, and inclusive. And that means honesty at the turnstiles, honesty about the wages you pay players and open dialogue with all stakeholders. I return to Leipzig and the approach being taken by the new kid on the Bundesliga block. They are very open about what they are trying to achieve. It doesn’t mean everyone likes it, but the majority of football fans in the city of Leipzig seem to love it. They must be doing something right- they do play excellent football, by the way, even though nobody will ever give them credit for that.

If you’re ever in Leipzig, a trip to both RB and Lok is certainly worth it. Non-league fans will surely love Lok’s atmospheric old ground!

This article first appeared in the Non-League Paper on Sunday March 5, 2017