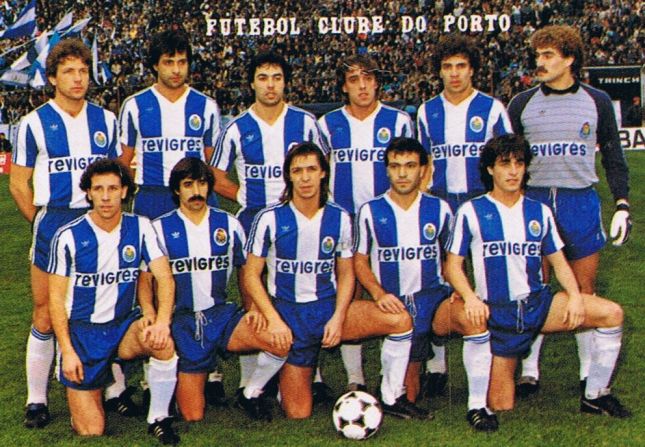 PORTO, believe it or not, had a life before Jose Mourinho and they also won the European Cup some 17 years before the “special one” led the club to the 2004 Champions League. It is a triumph that has often been overlooked by the international community, although the Porto team that beat Bayern Munich in May 1987 has a special place in the hearts of Dragons’ fans.

Neither have Bayern Munich forgotten their 2-1 defeat in Vienna’s Prater Stadium. The Bavarians went to the Austrian capital as red-hot favourites, even though this was not what you might call a classic Bayern line-up. Nevertheless, they were Germany’s champions and had clinched a hat-trick of Bundesliga titles.

Porto were about to lose their own title to Benfica, their fierce rivals and although they had fought their way through to the final, sceptics suggested that they had not really been seriously tested on the road to Vienna. While Bayern had beaten PSV Eindhoven, Austria Vienna, Anderlecht and Real Madrid, Portugal’s champions had disposed of Malta’s Rabat Ajax, Czechoslavakia’s Vitkovice, Denmark’s Brondby and Dynamo Kiev from the USSR. The semi-final against Kiev suggested that Porto were on to something, however, as they won both legs by 2-1.

Porto had won the Primeira Divisão in both 1984-85 and 1985-86. They were fortunate to have Fernando Gomes in their forward line, a prolific goalscorer that enjoyed two spells with the club. Gomes began his career with Porto and between 1974 and 1980, scored 125 goals in 158 league appearances. He defected to Spain for two years and joined Sporting Gijon, returning to Porto in 1982. Gomes netted 21 goals in both title campaigns, but he would break his leg a few days before the European Cup final. His absence was another reason why most people wrote-off Porto’s chances. Gomes helped his club reach the final with five goals, four of which came in the club’s 9-0 dismantling of Rabat Ajax. His other goal came in the semi-final second leg in Kiev.

Porto coach Artur Jorge took over in 1984, joining from Portiomonense. As a player, he had appeared very briefly for Porto, but was better known for his time with Academica and Benfica. He won 16 caps for Portugal. Essentially, he was a Porto man, born in the city in 1946.

Among Jorge’s first signings at Porto was 18 year-old Paulo Futre, who was acquired from Sporting Lisbon after the teenager was refused a rise by his paymasters. Futre, a talented left-footed winger, was seen as a great hope for the future and his style of play drew comparisons with none other than Diego Maradona. Another early signing was Quim, a defensive midfielder from Rio Ave. Jorge also brought fisherman Antonio Andre to Porto from Varzim, a tough tackling – and occasionally over-zealous – midfield man.

Madjer joined after a short spell with Racing Paris. He is still widely regarded as one of Algeria’s greatest players. A skilful and tricky performer, he would make a sensational impact on the 1987 European Cup final, becoming the first African to score in the final.

Bayern Munich hadn’t contemplated defeat and it was said that the club’s president had even prepared his victory speech in advance. Uli Hoeness, the club’s general manager, forecast that the game would represent the dawning of a new golden era but later had to admit it was one of the worst defeats in the club’s history.

Porto were deprived of Gomes and central defender Lima Pereira, who had also broken his leg. Madjer, talking years later about the final, recalled that from the moment he saw Bayern’s players strolling around the pitch before the game, he was not optimistic that he would have little chance of making a splash. “I felt blocked,” he said.

For the first 45 minutes, Porto looked overawed by the occasion and largely ineffective up front.  And it got worse, for in the 25th minute the favourities took the lead when Porto’s Jaime Magalhaes headed the ball straight into the path of Ludwig Kogl and the Bayern forward dived to head home. Bayern could have added to their tally, notably when Rummenigge almost scored with a cross-shot.

At half-time, Jorge brought Brazilian Juary on for Quim. Juary was not a first-choice striker and played just 40 games in the league over three years. Signed from Italy’s Cremonese in 1985, he was largely seen as an understudy to Gomes, but the substitution proved to be a master stroke by Jorge.

Juary was to play his part in creating history. Porto, eager to make amends for their first half, started to pressure Bayern. Futre and Madjer were in fine form, really testing the Germans’ defence. But Porto had to wait until 13 minutes from time to equalise. Porto attacked down the flank and the ball was played through to Juary, who evaded a challenge from Pfaff before pushing it to Madjer, who had his back to goal. The Algerian back-heeled the ball and found the back of the net, much to the shock of the Bayern defence. It was an audacious and quite brilliant piece of play. Pele called it “nearly the greatest goal I have ever seen” – the reason it was almost the best? Madjer looked back to see what he was doing, if he had executed “blind”, in Pele’s eyes it would have taken the goal to an even higher level. Madjer has claimed, tongue-in-cheek, that his goal has become a “registered trademark”!

Before Bayern could recover, Porto scored again, Madher turning provider as he dashed down the left flank and crossing to the far post when Juary volleyed high into the roof of the goal. It was the winner and triggered off emotional scenes in Vienna and back in Portugal.

Porto won the Portuguese title again in 1987-88 but their defence of the European Cup was short-lived, easily getting past Vardar before falling to Real Madrid in round two. They did win the Intercontinental Cup, beating Penarol in Tokyo with goals from fit-again Gomes and rising star Madjer, whom Bayern Munich tried to sign. They completed the double in Portugal, beating Vitória de Guimarães in the final. In beating Bayern in 1987, they became the first Portuguese club to win the biggest prize in Europe since Benfica’s victories in 1961 and 1962. As marvellous as the success in Vienna had been, it did not signal the start of a new era for the game. Porto would eventually be back at the summit in 2004  when they followed 2003’s UEFA Cup win with the UEFA Champions League, but that’s a different tale.