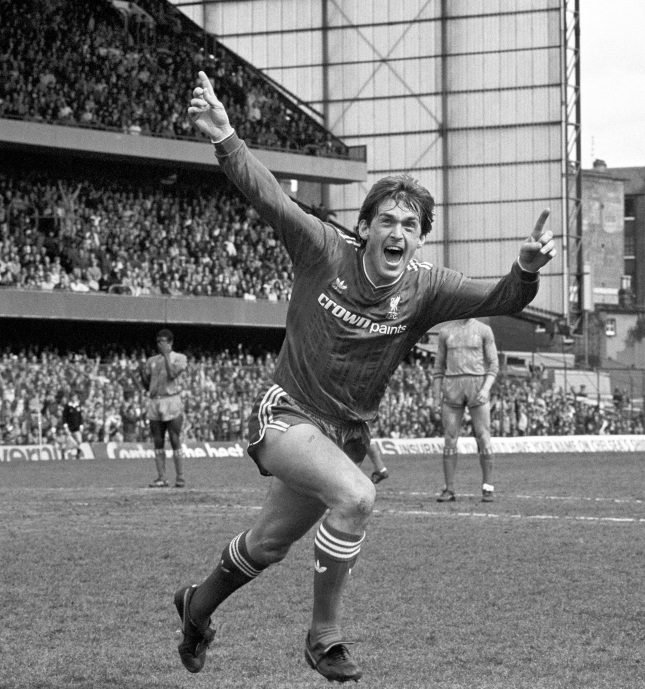 AFTER dominating the period from the mid-1970s to the early 1980s, Liverpool at last won the coveted “double” with possibly their least impressive team from that period. However, credit was due to Liverpool for timing their run to the finish perfectly, remaining unbeaten in the last 12 games while their rivals slipped up.

It was a season that saw various teams have their moment – neighbours Everton were favourites to regain the title they won in 1985, West Ham United enjoyed their best-ever league season and Manchester United started the campaign in all-conquering form but fell away as the season progressed. Chelsea, too, were also cast in the role of championship contenders until the new year.

Liverpool went into the season under new management for the second time in three years, Kenny Dalglish taking over as player-manager in the close season of 1985. Unlike his predecessors, Dalglish didn’t have European football to look forward to, for at the 1985 European Cup final, Liverpool fans were involved in the Heysel Stadium tragedy that resulted in 39 Juventus fans being killed. English clubs were banned from Europe until 1990.

The events in Brussels could have cast a long shadow over Anfield, but Liverpool were determined to regain the crown they lost to Everton. In fact, the two Merseyside clubs dominated the domestic season.

Liverpool started slowly, though, only adding to their squad in September with the acquisition of Aston Villa’s midfielder Steve McMahon. At the time, Manchester United were making the early running and by mid-October, they were 10 points ahead of Liverpool.

As the end of 1985 loomed, Liverpool’s form was still unpredictable, with goalkeeper Bruce Grobbelaar coming in for criticism for his performances. Indeed, one newspaper went as far as saying that the Zimbabwe international had cost Liverpool as many as 15 points.

The year ended with Liverpool in fourth place and when Everton won 2-0 at Anfield in February, with Grobbelaar again under pressure, the Reds’ championship hopes looked forlorn. Everton were eight points ahead of third-placed Liverpool.

The derby defeat seemed to act as a spur for Dalglish’s team ran into their best form and also set on a path for the FA Cup final. They beat Chelsea, Norwich, York and Watford to reach the semi-final where they disposed of Southampton. While Liverpool were now over their inconsistencies, Manchester United and Chelsea dropped from view leaving West Ham to battle the championship race out with the Mersey duo.

Liverpool found their goal touch in the closing months, recording big wins against Oxford United, Coventry City and Birmingham City. They went top of the table at the end of March after winning 2-0 against Manchester City, but the crunch weekend came at the end of April when Everton slipped up at Oxford United while Liverpool were beating Leicester City. Liverpool had one game to go, away at Chelsea, and won 1-0, thanks to a well-taken and typical goal from Dalglish. This meant that Everton and West Ham could not overtake Liverpool’s 88 points.

Bruce Grobbelaar (28): Joined Liverpool in March 1981 from Vancouver Whitecaps, costing the club £ 250,000. A flamboyant goalkeeper, occasionally prone to bizarre mistakes, he became something of a folk hero at Liverpool. Born in Durban, South Africa, he was a Zimbabwean international.

Alan Hansen (30): Signed from Patrick Thistle in 1977 for a £ 100,000 fee, Hansen established himself in the Liverpool defence in his second season at Anfield and proved to be an excellent reader of the game. He won 26 caps for Scotland and was later named Liverpool’s club captain.

Gary Gillespie (25): Scottish defender who was Liverpool manager Joe Fagan’s first signing in July 1983, costing £325,000 from Coventry City. Took time to settle at Liverpool, but in eight years made 156 league appearances. In 1985-86, he netted a hat-trick for Liverpool in their 5-0 win against Birmingham. Went on to win 13 caps for Scotland and left the club in 1991 for Celtic.

Mark Lawrenson (28): Joined Liverpool in August 1981 from Brighton for a £900,000 fee. Played for Preston North End earlier in his career and won 39 caps for the Republic of Ireland. A tough tackler, he was also a very skilful and fast defender.

Ronnie Whelan (24): A hard-working and consistent midfield player who was signed from Irish club Home Farm in 1979 for £ 35,000. Dublin-born, Whelan was being courted for some time by a number of English clubs, including Manchester United. He developed a reputation for being the man for the big occasion and won 53 caps for Ireland in his long career.

Steve Nicol (24): Joined Liverpool in 1981 from Ayr United for £ 300,000. A versatile player who could play in defence or midfield, he took time to establish himself at Anfield but went on to make 343 Football League appearances. Capped by Scotland 27 times.

Craig Johnston (24): South African-born Australian who joined Liverpool from Middlesbrough in March 1981 for £ 650,000. A busy, skilful midfielder who had an eye for goal. He was capped at under-21 level by England.

Kevin MacDonald (24): Scottish midfielder signed from Leicester City in November 1984 for £400,000. Spent almost five years at Anfield, never commanding a regular first team place. Nevertheless, he played his part in the 1985-86 campaign. Broke his leg in 1986 and never regained his place.

Steve McMahon (24): Signed by Liverpool in September 1985 from Aston Villa for £ 350,000. Started his career with Everton but joined Villa in 1983. A combative player, he played a key role in Liverpool’s “double” season, although was not involved in the FA Cup final. Left the club in 1991 for Manchester City, by which time, he had won 17 caps for England.

Jan Mølby (22): Danish midfielder who was signed from Ajax Amsterdam in 1984 and struggled in his first season with Liverpool. A skilful player, strong and competitive, his lack of pace was often evident, although his ability to score vital goals was highly valued. Capped 33 times by Denmark, he stayed at Liverpool until 1996.

Kenny Dalglish (35): Dalglish arrived from Celtic in August 1977 and became one of the club’s most popular and celebrated players, winning over 100 caps for Scotland and becoming player-manager in 1985, leading Liverpool to the coveted “double”. Named Manager of the Year in 1985-86.

Ian Rush (24): Arrived at Anfield from Chester in March 1980, costing Liverpool £300,000. Became one of the most prolific goalscorers in the history of the game and in two spells with Liverpool, netted 346 goals for the club. He scored 33 goals in all competitions in 1985-86.

Paul Walsh (22): Joined Liverpool in 1984 from Luton Town for £ 700,000 after starting his career with Charlton Athletic. A skilful forward with good dribbling skills, Walsh played four times for England. He remained at Liverpool until 1987 when he joined Tottenham.