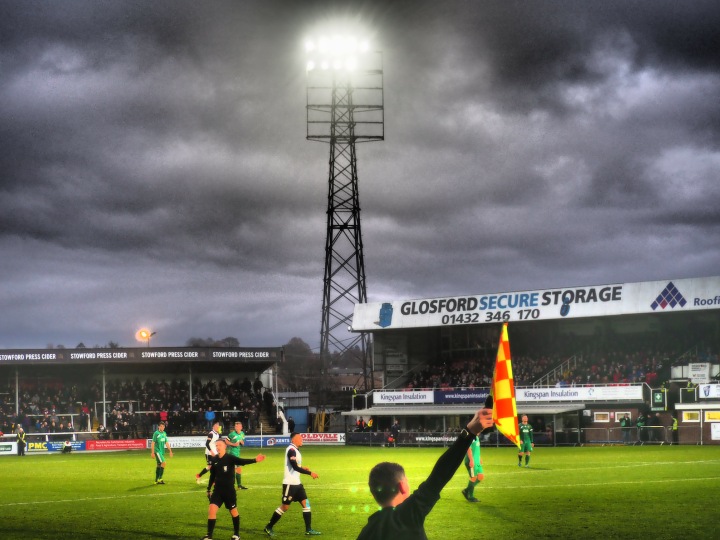 TWENTY-THREE years ago, almost to the day, Hitchin Town travelled to Edgar Street, home of Hereford United, who were then in the fourth tier of the English game. Although Hereford were no great shakes, Hitchin were languishing near the foot of the Isthmian League Premier Division. The Canaries had worked their way through a series of great escapes, against Newmarket, Tiptree and Cambridge City, and pulled off an impressive 1-0 win at Burton Albion. Nevertheless, nobody truly expected them to win at Edgar Street.

Twenty-three years later, Hitchin found themselves in the same league as the reformed Hereford club. Step three of the non-league game. While that level suits Hitchin, it doesn’t sit comfortably with a club like Hereford. That said, Hitchin, who also met the Bulls in the FA Trophy a few years after their FA Cup encounter, had played four games against Hereford and were unbeaten. Both occasions are referred to in a soon-to-be-published new book on the club, Tales of the Town, so it was only fitting that Game of the People made Hitchin’s third trip to Hereford.

Comparisons between 1994 and 2017 are difficult to make. In the early 1990s, non-league football was arguably of a higher quality than it is today, but the game is certainly more professional, more organised than it was back then. Indeed, Hitchin manager Andy Melvin, in an interview with the media at the time, said Hitchin “was something of a shambles”. When Melvin arrived at the club, there was a three or four year period when Hitchin stepped up a gear, winning promotion in 1993, beating teams like Enfield, Chesham and Stevenage in 1993-94 and then embarking on a memorable FA Cup run. Melvin, a self-styled “lucky fellow”, was a great man manager and commanded loyalty from many of his players. On the journey to Hereford in November 1994, he wise-cracked his way to Edgar Street until the floodlights came in view. The coach fell silent, suggesting nerves, but Hitchin put on a fantastic display, going in at half-time 2-0 ahead thanks to a brace from Shaun Marshall. The game ended 2-2, but there was a replay to look forward to.

The coach journey to Hereford in 2017 was somewhat different. For a start, there were few supporters and secondly, Melvin was no longer there. Mark Burke, who skippered the team in 1994, was now manager – all reading specs and grey hair, despite being a youthful, trim figure. He spoke about the new walking football initiative he’s launching at the Arena in Baldock. “Twenty-three years ago, the conversation was somewhat different,” I said. “Now we are talking about walking football for retirees. We’re all much older.”

Some of Burke’s team were not even born when Hitchin met Hereford in 1994, but the club has not enjoyed a memorable cup run since 1995 when they went on to beat Bristol Rovers. “Next year,” said Burke. “The law of averages says we will do it soon.”

The reason Hitchin met Bristol Rovers in 1995, just one game after their first tie in the competition of 1995-96, was because they eventually beat Hereford 4-2 in the first round replay on a night of great emotion and drama. “What good days they were,” I told “Burkey”. “I don’t think we realised how good they were at the time, but then you never do.”

This time it was much more low key. Hitchin have been poor away from home in 2017-18 and Hereford, who were reformed in December 2014, are in their third season, having won promotion in 2015-16 from the Midland League and in 2016-17 from the Southern League South & West. The plight of Hereford United, which was wound up in 2014, reminded people they had a club with some heritage in the town – 1971-72’s FA Cup run and John Motson’s immortal words have lived on in English football as one of the great moments of the period.

Hereford United were relegated out of the Football League (which they joined in 1972) in 1997, but came back in 2006 before being relegated again in 2013. That’s why their ground looks like an old-time Football League stadium – a “proper ground” to quote one visitor – and their match-day operations seem a little excessive in the non-league environment.

In 2017, those floodlights were still in view as we entered the town centre. They’re huge and act as terrific navigational points. I was keen to visit the pub that I once went to when making a visit to Edgar Street, but learned that the Nell Gwynne had gone the way of many other hostelries. 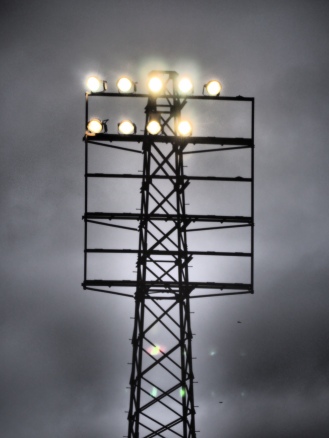 In 1994, the crowd was 3,078 but the traffic and parking at Edgar Street seemed a lot more complicated in 2017. More cars, for certain, more bureaucracy, perhaps, but also building works, the bane of town centres, contributed to an uncomfortable arrival. As I walked down the road to buy a ticket for the game, a prerequisite for away fans, I was struck on the arm by a brown Range Rover with a quirky number plate, which was clearly going too fast. Luckily, only my elbow was bruised. Not a good start.

Undergoing a bag search at a non-league ground seemed rather strange, especially given that Hitchin had just 17 fans at the game. Luckily, I had no contraband! Heavily, but amiably stewarded, we enjoyed the luxury of acres of room on the terrace or in the seats, away from danger. Apparently, Hereford have to do this as Edgar Street is a designated stadium. It only further underlines that the club is merely “passing through” until they find their natural level, which is probably National League Premier, although their fans will hope for better. In the modern game, your financial structure is more important than ever before, so given that the club struggled to maintain Football League status, more realistic ambitions might be the order of the day.

I recalled their chairman in 1994, Peter Hills, telling us that it was a challenge for the club in League Two, but people still had aspirations beyond what the club could achieve. We were shocked when he told us unhappy fans had attacked one of his horses. I also remember how gracious he was in defeat after the replay. “Enjoy it, we’ve been there, you’ll always remember this.”

At the moment, Hereford are a big fish in a small pond. Their average crowd is 2,300 which, surprisingly, is down on 2016-17, but only half a dozen National League clubs can compare and there are three or four in the Football League who struggle to reach that figure.

Against Hitchin, the crowd was below average, but then the away support was small.  In 1994, the end that is now closed was packed with supporters from North Hertfordshire. Now, a tractor sits by the terrace.

I would wager that Hereford will win promotion this season. Their team was full of pace, energy and inventiveness. They went 1-0 up with a classic diving header from Tyronne Duffus after 17 minutes and the same player added a second on 36. Hitchin missed a penalty afterwards when Ben Walster slipped, a la John Terry 2008, as he took the kick.

The impressive Lance Smith scored Hereford’s third after 45 minutes and it started to look very ominous for Hitchin. John Mills missed a penalty for the home side, but it was a temporary reprieve, for Smith scored again with a terrific flick from a free kick. Smith secured the matchball in the 70th minute with Hereford’s fifth. It could have been a lot worse. “We were lucky to get away with a five-goal defeat,” said Mark Burke.

Such a constrast to 1994, when jubilant Hitchin fans enjoyed their team’s performance. This time, a deflated gaggle of followers had a three hour journey home to make. As the coach sneaked out of Hereford, those imposing floodlights resembled huge, skeletal ghosts in the dark November night. It’s unlikely Hitchin will see them again next season.