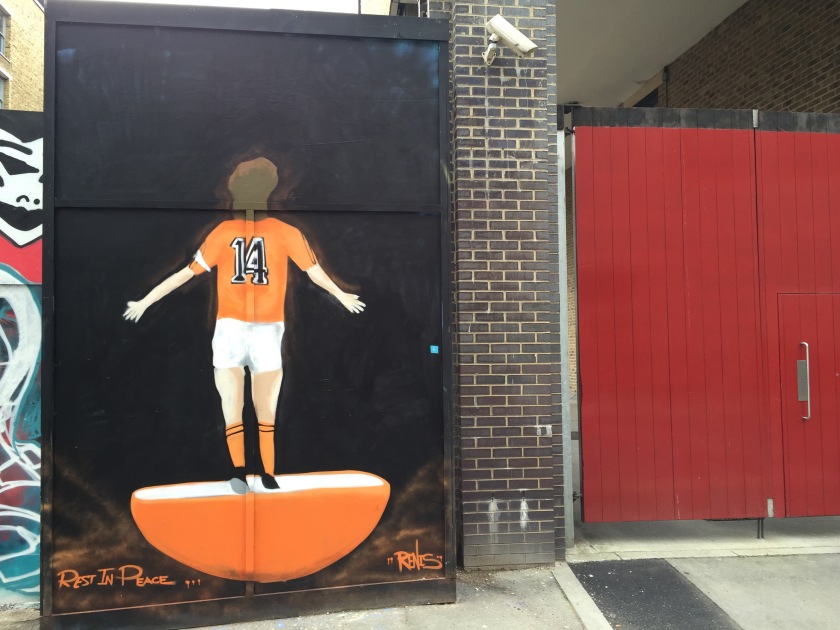 WHEN YOU ARE 12 or 13 years old, you have heroes. You have infatuations. You want to emulate and imitate. In 1972, that might have meant sticking platform shoes on or glitter in your hair. Or pretending to be Dutch.

To most people, the Netherlands was a flat country with windmills and people wearing clogs. But in the early 70s, perceptions of the land of Edam cheese changed. A gangly, elegant and self-assured man called Hendrik Johannes Cruyff walked into the lives of football fans, not just in Amsterdam, but across Europe. Until 1971, when his team, Ajax, won the European Cup at Wembley, Johan Cruyff was a name in World Soccer or Leslie Vernon’s column in Goal.

We didn’t have wall-to-wall football on TV, so the printed word and rumour was all we had to build up our knowledge of overseas teams and players. When he did appear on British TV, commentators would call him ‘Cruff’!

I was an avid reader of the International Football Book series, so I knew a bit about Cruyff and Ajax when I went to Wembley in May 1971. I was captivated by their unusual white and red shirts, the Ajax fans – all long hair and clogs – and the klaxons, which would provide the soundtrack of World Cup 1974.

It wasn’t a brilliant game, but Ajax won 2-0 and began their three-year rule of European football, inspired by Cruyff and his sidekick Johan Neeskens. It was the age of Total Football, and the chief orchestrator was Cruyff and the Ajax manager, Rinus Michels.

You couldn’t buy Ajax shirts in the UK, indeed anywhere, because the marketing gurus had yet to discover you could make money out of selling replica kits to fans. But I had a makeshift white shirt and I wanted to convert it to an Ajax outfit. My mother found some red material and sewed a central stripe down the front of my shirt. It looked very Heath Robinson, but from a distance, I might have resembled Cruyff’s younger brother. The shirt divided opinion. Some admired it, others derided it. But I was happy, because I was paying homage to my new found hero. As a Chelsea fan, Cruyff and Ajax went close to competing with Osgood, Hollins and Cooke for a while.

I followed Cruyff’s progress carefully and watched Ajax beat Inter and Juventus in 1972 and 1973 respectively. Like many people, I loved the way they played, flowing football that was skilful, intelligent and cultured – with just a little aggression. Cruyff’s own contribution, his bursts of speed through defences, his passing and ability to arrive in the penalty area at the right time, made him the perfect player of his time.

He was also single-minded and was one of the first players to ‘know his worth’. Culturally, he is now compared by some social historians as being as important to the Netherlands as John Lennon was to the UK. Like Lennon, Cruyff represented many of the changes that were going on in Europe in the late 1960s and early 1970s. He had his own philosophy and was fond of one-liners that became known as ‘Cruijffiaans’. The Dutch were one of the last countries to shrug aside the narrative of the free love generation and Ajax were often described as footballing hippies with their colourful clothes, beads and blond hair.

My interest in all things Dutch extended to music. One of my favourite bands of the time was Focus, a slightly eccentric group that relied on virtuoso guitar and organ playing and phonetic vocals. Moving Waves was a classic album and tunes like Sylvia, Hocus Pocus and House of the King still get regular airings on my iPod today. With Ajax, Cruyff, Edam cheese and Focus, I couldn’t help feeling that Holland must be a great place to live. A utopian society, even.

But in an ideal world, Cruyff would have lifted the World Cup in 1974. I had predicted a Holland v West Germany final, but tipping a 2-1 win for the Dutch. They had skipped their way through the competition with the sort of performances that had characterized Ajax’s European Cup runs of 1970-73. But little did we know that the empire was starting to crumble. Ajax, for example, had already lost their talisman to Barcelona, a transfer that made Cruyff the most expensive player in the world. He went on to make a similar impact in Catalonia, but Barca never won the European Cup with Cruyff in their line-up. Ajax went crashing out of Europe in 1973 to CSKA Sofia, the sort of team they would have brushed aside when they were in their pomp. As for the Dutch national side, they saw the final as a chance to settle old scores.

In Munich, Cruyff’s first-minute acceleration into the penalty area ended with Neeskens scoring from the spot. The favourites were ahead, but sadly, nay tragically, they lost 2-1. The Dutch were grief stricken as if the defeat marked the end of an ideology. It probably did, because Cruyff would never play in the World Cup finals again.

The Dutch master and I came across each other again in February 1977 when England faced the Netherlands at Wembley.  Cruyff was still only 26 and had plenty of mileage in his tank, and he was joined by six members of the side that lost the World Cup final. He had already announced that he would not go to the 1978 finals in Argentina, but that had not blunted his edge.

Some say it was one of the best individual performances by a visiting player since Puskas and co. in 1953. He had 61 touches of the ball and of his 50 passes, 30 were positively forward balls. One report said: ‘He switched play with some stunning 40-yard passes which left the crowd and England’s defenders gasping.’ England lost 0-2 and Cruyff dictated play from start to finish, directing traffic, cajoling his team-mates to find new positions and piercing the England defence time and time again. It was a joy to watch.

In Argentina, without Cruyff, the Netherlands did remarkably well, albeit in a more functional way. They did have their moments and reached the final once more, losing to the hosts, as they did in 1974. With Cruyff would they have won? I think so, but it’s one of those ‘if only’ episodes.

Cruyff enjoyed success as a coach and won the European Cup with Barca. His legacy in Spain is every bit as strong as it is in his homeland. In recent months, Cruyff has been credited with being the grandfather of the Spanish ‘tiki-taka’ style that has proved so successful for club and country. That may be a little harsh on Pep Guardiola, but it does demonstrate the influence the great Dutchman has had on European football.

I thought Cruyff had been passed into my memory bank, but in 1987, I recall one incident that illustrated how important he had been to my footballing education. When I moved to Hertfordshire, my house number was 14. The day I picked the keys up, I remember thinking to myself, 14….Johan Cruyff. The ultimate ‘Total Footballer’ was still with me, somewhere. He still is.