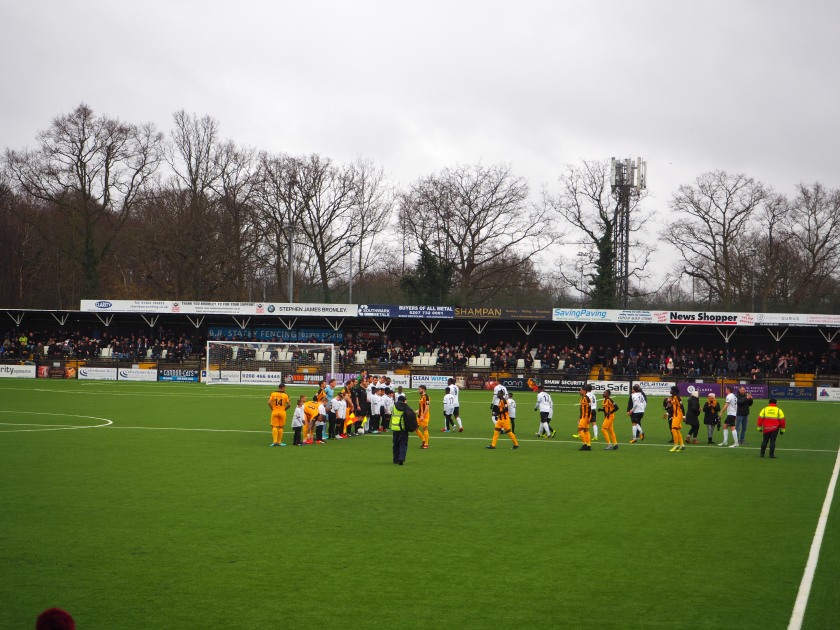 BROMLEY has always been a place of special significance for me. In my youth, I scored a goal at Hayes Lane in the first minute of a game involving a National Westminster Bank XI and, I believe, a team that included militarymen. Aside from that moment of glory, Bromley was the first away fixture I attended as an official of Hitchin Town, beginning a relationship that still stubbornly exists today, albeit at a safer distance.

In a completely different direction, about 30 years ago, I hired someone who was a peripheral member of the famed “Bromley contingent”, a proto-punk from Essex that often appeared on TV. More importantly, given my total dislike for punk music, Bromley was “Bowie country”, where the “Thin White Duke” learned part of his trade. So, deep respect for Bromley.

What about that football match in 1977 then?, I hope you will ask. It went something like this: kick off, a pass played out to the left, I went tearing through (I could run a bit in those days), met the ball, kicked it on, reached the apex of the penalty area and as the goalkeeper came running out, completely bundling me over, I shot low in off the post (pictured left hand side). I was winded and got up to see the rest of the team celebrating. 1-0 after 20 seconds.

Matey with the beard, apparently a squaddie, whispered into my 17 year-old ear: “Do that again, young ‘un and I will f****** have you.” He did, not once but twice, and I was subbed at half-time, battered and bruised. We lost 5-1. By 1979, my football career was over, a neck injury sustained on Orsett Heath, along with a persistent pelvic condition, proving too much. “You were decent, but weedy…made of glass,” said a mate some 30 years later when we recalled the game.

When I dipped my toe, then immersed myself completely, in non-league football, it was a game at Hayes Lane in March 1991 that alerted me to the precarious and often ludicrous industry that football is outside the Football League. I had joined Hitchin as an associate director at a time when their finances had made the front page of the local newspapers. I was led to believe that the cash problem was around £ 50,000 but outside the Bromley board room, where I had met the renowned John Fiorini, Hitchin’s stalwart treasurer revealed the club’s financial problems were in fact existential. I was staggered, naively believing that non-league clubs were run like corporate bodies. As I have since found out, hearts rule heads and common sense rarely prevails. A couple of days later, the Hitchin chairman resigned and although I considered severing ties right then, I soldiered on. There was little doubt that my eyes were opened that day at Bromley.

I returned on a bitterly cold February afternoon to a very different club than the one I recalled in 1991. Bromley have acquired ambition on a big scale since their Isthmian Division One days and what’s more, the locals have bought into it.

In recent years, Bromley have been clear about their aspirations – in February 2016, they said they were aiming for the Football League in three years. This is currently their third year in the Vanarama National League and in 2017-18, they’re performing well, but the Football League is now a year away which is a big ask for the Kent club.

There’s a healthy upward trend, though, with crowds averaging 1,500 this season. That’s low if you want to make the step up, but consider that in 2013, they were averaging 500, so they are clearly tapping into something. Bromley is a large town, only marginally smaller than some Football League towns, and Kent is relatively starved of high class fare, so it is not unreasonable to suggest that 2,000-plus could sustain a higher stage – that’s if Bromley can prise youngsters away from London clubs and a solution can be found for artificial surfaces in the Football League.

Two thousand was exactly the size of the crowd for the Kent derby against Maidstone United. They brought around 500 fans to the game, a very impressive figure for non-league football, and they were noisy, despite being exposed to the elements. The cover behind the goal was scarcely better.

It was a very entertaining and absorbing game, Bromley going ahead after just six minutes when Maidstone’s Alex Wynter and Lee Worgan let in Josh Rees and he slotted home a soft goal.  The visitors responded well and should have levelled when Sutton United loanee Ross Lafayette skied his effort with only goalkeeper David Gregory before him.

But Maidstone’s hard work and persistence paid off when a cross from Joe Anderson was flicked on by Andre Coker and Jamar Loza had a simple task to equalise on 35. By the interval, Bromley were in front again, George Porter scoring with a nice chipped finish.

The second half was a fairly even affair and 13 minutes from time, Maidstone substitute Blair Turgott, formerly with Bromley and now on-loan from Boreham Wood, scored another equaliser, rounding Gregory before finding the back of the net. Maidstone had Dean Beckwith, who was making his debut, sent off, but the game ended 2-2, a fair result given the effort put in by both teams.

A lively encounter that kept everyone interested, but the draw pushed Bromley out of the play-off zone and refused to end Maidstone’s run of 14 games without a win. Bromley also have the FA Trophy to focus on, they are in the last eight where they will face Spennymoor at home on February 24. They’re the highest placed club left in the competition, which means they are undoubtedly one of the favourites. A trip to Wembley? Bromley have been there, done that, winning the FA Amateur Cup in 1948-49 (their third triumph in the competition) against Romford in front of 93,000. If they can return to Wembley this year, the dream of the Football League will start to look somewhat more realistic.

To read about behind the scenes in non-league football, click here