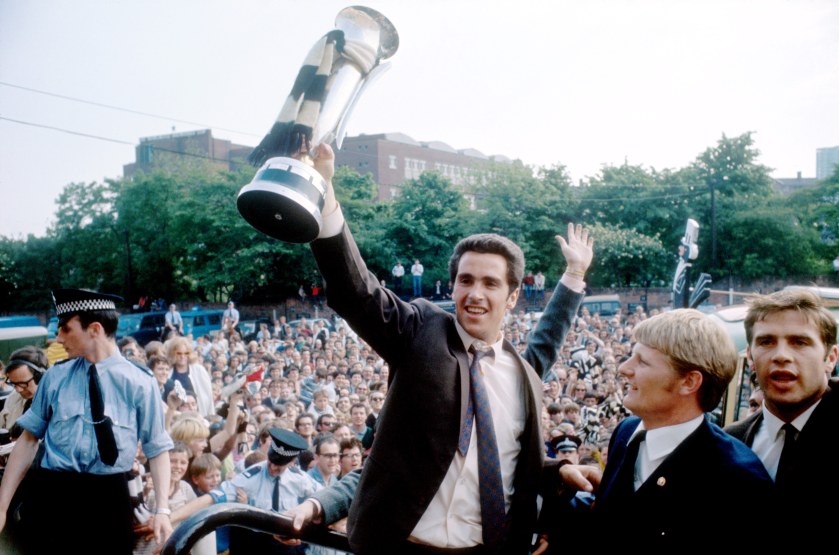 NEWCASTLE UNITED fans like to think of their club as one of the truly big footballing institutions in the country, and in terms of the Magpies’ support, heritage and potential, they are not too far wrong. But the problem is that Newcastle’s glory days are now more than half a century away and the era in which they were indeed the top club in Britain go back to the gas-lamp.

Consider the facts: 1955 was the club’s last FA Cup win, it was 86 years ago that they won the Football League and over 40 years ago that the last piece of meaningful silverware was picked up. During that time, clubs of a lesser standing have won stacks of trophies. In short, most of today’s regulars at St. James’ Park have never seen the club win anything.

The last triumph was in 1968-69, the curiously-named Inter Cities Fairs Cup, the tongue-tied elder broth

er of the UEFA Cup, which was the father of the bastard child that is now the Europa League. The pity of it is that the Fairs’ Cup is guilty by association and while in 1969, it meant something real, the plight of Europa has devalued the entire series of competitions. A shame, because as you will discover, the old Fairs and UEFA Cups were very strong – “harder to win”, said one journalist when comparing it to the old European Cup.

Joe Harvey’s side went into the 1968-69 season with just one new face, Partick Thistle’s Tommy Gibb. There was little hint that the European campaign would be as exciting as it turned out. Newcastle’s home form was good, but away from home, they were something of a soft touch. With players like the under-rated Bryan ‘Pop’ Robson, Welsh international forward Wyn Davies – who had taken his time to settle in after joining the club from Bolton in 1966-  Irish international goalkeeper Iam McFaul and skipper Bobby Moncur, Harvey had some talent to call upon, but consistency and strength in depth was always a problem.

In the first round, Newcastle were drawn at home to Feyenoord, who a year later would be crowned European champions. Feyenoord had almost half of the Dutch international side, a nascent team that would eventually almost conquer World football. The first leg was a resounding 4-0 win for the Geordies, surely enough to see Feyenoord off. Over in Rotterdam, the Dutch scored twice but that four-goal win proved too much.

In the next round, Newcastle were seconds away from winning in Lisbon against a formidable Sporting, but conceded a last-gasp equaliser. In the second leg, a magnificent goal from Pop Robson settled the tie 2-1 on aggregate. This was an impressive win – Sporting were runners-up in Portugal to the mighty Benfica.

Real Zaragoza were next and in Spain, Newcastle were beaten 2-3. Back at St.James’ Park, 56,000 people turned up to see the second leg on a bitter night. Robson and Tommy Gibb scored to give United a 2-0 lead but Zaragoza pulled one back making it a nervous finale. Newcastle hung on to go through on the away goals rule. The next round was a meeting with another Portuguese side, Setubal,  but a 5-1 win at home virtually sealed a place in the last four. Setubal won 3-1 in the second leg, so it was 6-4 over the two legs.

Glasgow Rangers were the opponents in the semi-finals. Almost 76,000 saw the first leg at Ibrox Park, a Fairs Cup record crowd. Iam McFaul was Newcastle’s hero, saving a penalty from Andy Penman as the game ended 0-0. The second leg was marred by crowd violence, but goals from Jimmy Smith and Jackie Sinclair sent Joe Harvey’s men through to the final to meet Ujpest Dosza, then referred to – as all Eastern European sides were in those days – as  the crack Hungarians.

Ujpest Dosza breezed past Goztepe Izmir in the semi-final, but it was their two-legged victory (3-0) over Don Revie’s Leeds that prompted people to say Ujpest were “the best team in Europe”. A little elaborate praise, perhaps, but Ujpest were a tough outfit and they had Ferenc Bene, one of the successors to the Mighty Magyars of the 1950s, in their ranks. They had also beaten Aris Thessaloniki and Legia Warsaw on route to the final and received a bye against Union Luxembourg, a game that would surely have caused them no difficulties. Their route to the final had been somewhat easier than the Geordies.

The first leg at St. James’ Park was tight for 45 minutes, but in the early stages of the second half, a free kick by Tommy Gibb was aimed at the head of Wyn Davies, who sent the ball goalwards, only for Ujpest keeper Antal Szentmihalyi to save. As the ball spun out, Moncur left-footed it just inside the post. His first goal for the club. Ten minutes later, he did it again, playing a wall pass with Danish midfielder Preben Arentoft before hitting another left-foot drive low past the keeper.

Newcastle scored again through Jimmy Scott, a surging run, a one-two with Arentoft and as he squeezed past a defender, he lifted the ball over the advancing goalie. Three-nil to the good, surely Newcastle were home and dry?

It was June before Newcastle travelled to Hungary and were under pressure from the kick-off in the Nep Stadium, the scene of England’s humiliation in the 1950s.  Bene, the danger man, scored after 30 minutes. Just before the interval, Janos Gorocs extended Ujpest’s lead. By the 50th minute, Newcastle were level, Moncur – incredibly – scoring on 46 and Arentoft, with plenty of space, shooting the equaliser on 50.

With 16 minutes remaining, substitute Alan Foggon, a player rich in promise but ultimately, falling short of fulfilling it, went on a long run, struck the crossbar and followed up to score Newcastle’s third. The aggregate score was now 6-2. Newcastle had their successors to “Wor Jackie”.

Newcastle’s success was considerable. After all, the clubs they beat on the way to winning the Fairs Cup were all highly-ranked. This was not the Europa League that we know today. With the exception of themselves, they would mostly be competing in the Champions League. But they failed to build upon this achievement. They are still waiting for their next piece of silverware. It’s long overdue, but the “Toon” regulars won’t need reminding of that.