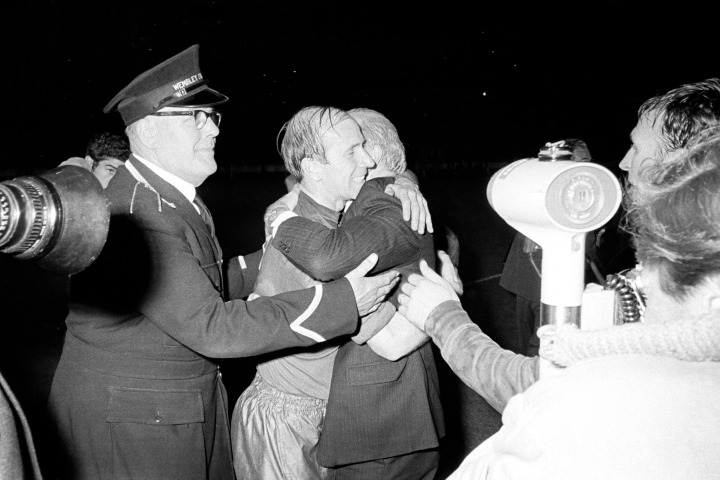 ENGLISH football was not quick to warm to the prospect of pan-European football and, it had no representation when the Coupe des Clubs Champions Européens kicked off in 1955, an early post-austerity attempt at sporting integration and collaboration.

Nevertheless, a combination of arrogance, xenophobia and the misguided belief that football was “our game” got in the way of progress. In 1955, Football League champions Chelsea were advised by the Football League not to enter a new competition for the crème de la crème of Europe. But a year later, Matt Busby, a long-time enthusiast of club football across the Channel, ignored the advice and took Manchester United into the Champions Cup with a vibrant young team.

The tragic Munich air disaster of 1958 all but killed-off that iconic United team and if fate had not stepped in, Busby may have led his “Babes” to triumph a lot sooner than 1968. In the intervening years, English clubs struggled to gain the upper hand over their Spanish, Italian and Portuguese counterparts and always fell short of the top prize.

The relationship between English clubs and Europe was a little uncomfortable. English football was still reeling after the Hungarians taught Billy Wright and his team-mates a lesson at Wembley in 1953. Although the media claimed Wolverhampton Wanderers were “world champions” after beating assorted Hungarians and Russians in friendly games under lights, overseas journalists, such as Gabriel Hanot of L’Equipe, were not impressed, especially as England had failed to shine in the World Cups of 1950 and 1954, their first tournaments after rejoining FIFA.

The premier accolade may have eluded English clubs, but the first European silverware was won by Tottenham Hotspur in 1963 and West Ham United two years later, both lifting the European Cup-Winners’ Cup, a competition for the domestic cup winners. Unsurprisingly, both clubs were managed by men who had been heavily influenced by the Hungarians that had torn England apart – Bill Nicholson at Spurs and Ron Greenwood at West Ham.

Nicholson summed up the importance of taking part quite simply: “It’s magnificent to be in Europe, and this club – a club like Tottenham Hotspur – if we’re not in Europe, we’re nothing… we’re nothing.”

These successes aside, English teams always came unstuck against teams like the ultra-professional Inter Milan, coached by Helenio Herrera, an arch-exponent of the Italian catenaccio system and feared across the continent, or the more flamboyant Benfica team that would eventually include Eusebio. In three successive seasons from 1962-63, Inter knocked out Ipswich Town, Everton and Liverpool, the English champions. More often than not, there was a hint of controversy about games with the top “continentals”, who were tutored in a “win at all costs” approach that upset Football League teams. English clubs also struggled with the partisan crowds often found at places like Milan’s San Siro stadium.

By 1966, though, something was stirring and it appeared that England’s top clubs were becoming more acclimatised. Manchester United, rebuilt after Munich and now including the revered triumvirate of George Best, Bobby Charlton and Denis Law, reached the semi-final of the European Cup, losing to Yugoslavia’s Partizan Belgrade. In the Cup-Winners’ Cup, Liverpool lost in the final to Borussia Dortmund in Glasgow. And in the Inter-Cities Fairs Cup, Chelsea and Leeds United both reached the last four before going out to Barcelona and Real Zaragoza respectively. Chelsea’s game with Barcelona demonstrated that English clubs could also exploit “dirty tricks” when manager Tommy Docherty arranged for the Stamford Bridge pitch to be flooded, deliberately delaying the tie to allow injured players to regain full fitness.

The following season, just after the World Cup, English and Scottish clubs demonstrated that Britain was now able to confidently look those “crack” eastern bloc teams, scheming Latins and methodical Germans in the eye. Celtic were crowned European champions, their attacking style overcoming Herrera’s hard-nosed Inter. Rangers, their city rivals, reached the final of the Cup-Winners’ Cup and Don Revie’s Leeds were beaten in the final of the Fairs Cup. Britain was certainly warming to the concept and potential of this new genre.

It was not only a case of teams simply getting used to the two-legged format, but there was an air of renewed confidence about British football and it was being recognised across Europe. Manchester United’s golden trio were all awarded the prestigious European Footballer of the Year prize – Law in 1964, Charlton in 1966 and Best in 1968. In 1967, players like Geoff Hurst (West Ham) and Alan Ball (Everton) were also listed in the Ballon d’Or rankings. Gordon Banks (Stoke City) and Bobby Moore (West Ham) were among the most coveted players in world football. Following the 1966 World Cup win, all England needed was to provide a champion club.

In 1968, it finally happened for Manchester United. While Busby’s team was now challenged domestically by neighbours Manchester City, who would win the championship, United embarked on a European Cup run that lacked nothing in drama and excitement. United didn’t steamroller their way through to the Wembley final, in fact they failed to win any of their away legs in Malta, Yugoslavia and Poland, and they had to scrape past Sarajevo and Gornik before meeting their bête noire, Real Madrid in the semi-finals. They beat the Spanish giants 1-0 at Old Trafford thanks to a George Best goal and then, in front of 125,000 people in Madrid, came back from 1-3 down to earn a 3-3 draw and win 4-3 on aggregate.

United’s opponents were Benfica, who included a few members of the Portuguese national team that finished third in the World Cup in 1966. United won 4-1 in extra time on an emotional night. As Busby and Charlton wept for the players that died in Munich a decade earlier, it was in fact the end of an era for United. Best recalled some years later: “For Matt and Bobby Charlton, for Bill Foulkes, for Denis Law….they’d done it. And then they sat back, and you could almost hear the energy and ambition sighing out of the club. It was like being in at the winding-up of a great company.” Best was not wrong, for United went into decline that culminated in relegation in 1974 – without the talismanic Irishman.

But in 1968 other clubs were just beginning their odyssey. A few months after United’s win, as Warsaw Pact tanks rolled into Prague and sparked fears of a broader conflict, Leeds won the Fairs Cup, beating Hungary’s Ferencvaros. Leeds were no angels, in fact they had a reputation for being cynically ultra-professional, but there was fierce criticism of the tactics of the team from behind the Iron Curtain. Ken Jones of the Daily Mirror summed up the first leg of the final, which Leeds had won 1-0 after intense provocation. “The reputation of Ferencvaros as a team of glowing quality was lost last night as they succumbed to the cynicism of European football. For Leeds, on the threshold of a season when they have promised to play with more ambition, it was a frustrating experience.”

By 1968, however, frustrations aside, the prospect of qualifying for Europe was seen as achieving success – if you couldn’t win the title, then finishing high enough for European football (Fairs Cup) was celebrated rather than tolerated. The Fairs Cup, which had a curious “one-club, one city” ruling that meant two clubs from London, for example, could not compete the same year, was won for the next two campaigns by English clubs. Newcastle United, in 1968-69, beat another Hungarian team, Ujpest, 6-2 on aggregate after slaloming their way past some tough opponents, including Feyenoord, Sporting Lisbon, Glasgow Rangers and Zaragoza. A year later, Arsenal won their first prize since 1953 (and they complain today about Wenger’s haul!) when they beat Anderlecht of Belgium 4-3 on aggregate. This win, which has often been overlooked, acted as the springboard for Arsenal’s 1971 “double” success.

British clubs also started to dominate the Cup-Winners’ Cup with Manchester City in 1970, Chelsea in 1971 and Glasgow Rangers in 1972 all emerging victorious.

Between 1967 and 1972, English club football appeared to be in the ascendancy, in constrast to the national team, which by 1972 was beginning a decline that would result in horrified failure to qualify for two World Cups (1974 and 1978) and reach the latter stages of the European Championship (1972). Malcolm Allison, that innovative and often misunderstood coach, said that this was one of the golden periods in the modern game, but 1972 turned out to be the peak of the post-1966 honeymoon.

Back in the UEFA Cup, Liverpool maintained the momentum and won the competition in 1973 and then a few years later, they were at the pinnacle, beginning a run of triumph for English clubs in the European Cup that included seven wins between 1977 to 1984. Heysel Stadium 1985 didn’t just break the hearts of football fans in England and Italy, it also ended English football’s glorious run. It has never really been replicated and we’ve certainly lost some of the wonder of floodlit international club football. But 50 years ago, success for Manchester United and Leeds United, opening the door for others, was like conquering unknown territory.