AS THE world’s oldest Football League club, Notts County has a rich heritage, but it is not a story gilded with glittering prizes. Nevertheless, a visit to Meadow Lane is a trip back to the industrial heartland of professional football. 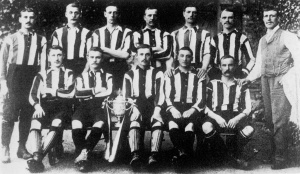 It is almost 130 years ago that Notts County kicked-off their inaugural Football League campaign, on September 15 1888, losing 2-1 at Everton. Notts County finished 11thin the 12-team league that season, but their place in history was secured. They were one of the pioneers, the dozen clubs that formed the world’s first competitive league competition. County’s only piece of major silverware in their history was won in 1894, the FA Cup, which was lifted thanks to a 4-1 victory over Bolton Wanderers. James Logan, a 23 year-old striker, scored a hat-trick, but two years later, died of pneumonia. Such were the times. Notts County may not have had to extend their trophy cabinet, but they do have friends in high places, for they sent a set of shirts out to Turin back in the early 20thcentury for Juventus.

On August 4, 2018, Notts County began their League Two campaign against Colchester United. The Magpies – or Pies – started the season as one of the favourites for promotion, largely due to missing out on going-up in the play-offs in 2017-18. This confidence is also due to the plethora of new signings made by the club in the close season. Eight outright signings and two loan players arrived at Meadow Lane in the summer. No big cash hirings, though, Notts County’s last financial report (2016-17) revealed a loss of £ 1.5 million and media articles suggested the club is losing around £ 30,000 per week. On available information, they seem to have spent around half a million pounds since the end of 2017-18.

As recently as 2016, Notts County were on the brink, staring into the abyss. The Revenue & Customs folk had issued a second petition to push the club into liquidation just a few months after an initial attempt was staved off. This was the catalyst for the club’s owner, Ray Trew, to sell Notts County. Nottingham-based businessman and current club chairman, Alan Hardy took over the club, paying some £ 3.5 million and committing to clear the HMRC debt.

Trew had bought County for just £ 1 after a grim period in which a too-good-to-be-true episode involving Munto Finance, a company claming to have Middle Eastern money behind it, moved in. This was the infamous saga that was aimed to elevate County to a new level – the poor man’s Chelsea? – and included the hiring of Sven-Goran Eriksson and Sol Campbell. But in football, if something appears to be too-good-to-be-true, it normally is and Munto’s real backer was linked to an already collapsed company. Eriksson departed with two month’s pay, claiming he had been duped. In fact, the club and its fans had seriously been taken for a ride.

Trew rescued the club from this nightmare, but he wasn’t the answer and he displayed all the attributes of a tinkering and impatient owner, hiring 11 managers in six years. In 2015, the club had total losses of £ 14 million and was only being kept going by loans from individuals. The chairman said, just a few months ago, that County were still being “financially challenged” largely because of the amount of win bonuses paid out in 2017-18. They finished fifth, winning 21 of their 46 games and were beaten in the play-off semi-final by Coventry City. That defeat helped fire the enthusiasm for 2017-18 with fans demonstrating their commitment in the form of increased season-ticket sales.

The road to Meadow Lane

Despite the bucolic name “County”, there’s no doubt that Notts County are an urban club in the old fashioned sense. Nottingham played its part in the industrial revolution, prospering through its textile industry. The city is also linked to other sectors such as bicycles and of course, it was the headquarters of Boots, the pharmaceutical retailer.

The short walk from Nottingham railway station takes you past commercial units, some Victorian-era buildings and a very inhospitable and racetrack-like main thoroughfare on which the ground can be reached across Cattle Market Road. Nevertheless, there’s a charm about Meadow Lane that’s not quite Lowryesque, but is certainly in keeping with writer JB Priestley’s view of football and its followers. It is very much a sporting metropolis, with Nottingham Forest just 300 yards away and cricket’s Trent Bridge also close by. All three contribute to a skyline of floodlights.

When Priestley arrived in Nottingham on his excellent English Journey in the early-1930s, he bumped into the sea of humanity attending the local derby of Forest v County. Priestley, a great observer of the human condition, had trouble coming to terms with the “stupid partisanship” of football’s followers, but added: “It has yet to be proved to me that these men out of the dingy side-streets ever did anything better with their free time and their shillings.”

One of those streets is Iremonger Road, named after a Notts County legend, Albert Iremonger, one of the tallest – and most striking in terms of appearance – goalkeepers ever to play professional football. Albert appeared 600-plus times for County between 1905 and 1925. An outspoken man, he was quick to tell match officials what he thought of them.

Iremonger Road runs round to Meadow Lane past a pub that has long taken the shillings of thirsty football fans, the Trent Navigation Inn. Today, there’s a brewery behind the pub, doubtless benefitting from the rise and popularity of specialist ale. The pub is a classic meeting place before a match (rather than the ominously sounding Hooterson London Road), but the sign on the wall makes it clear that it’s “home fans only”. Although the colours of choice were undoubtedly black and white, the odd Colchester United shirt could be seen coming out of the ox-blood tiled pub – league two it was, after all, and the mood definitely friendly. 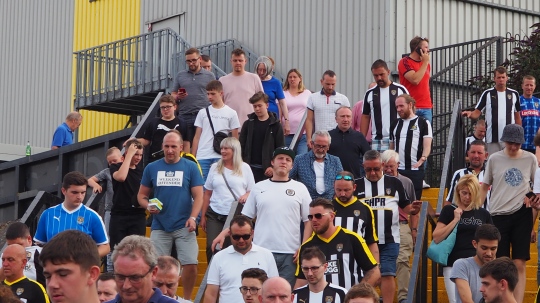 While County were something like 7-1 to win the League Two title, the mood among their fans was a shade more cautious. “It depends how good these new lads are,” said one long-standing Meadow Laner beneath the Derek Pavis stand. “The trouble is, this level, you don’t always know who is decent and who is just another freebie looking for a job. I gather the Dutchman is good, though…. We should be in with a shout this year if Nolan’s done his homework.”

The “Dutchman” he was referring to was Enzio Boldewijn, who joined from Crawley for a fee believed to be around £ 250,000 after scoring 10 goals last season. They acquired him for his speed, for Nolan identified a lack of pace as one of his squad’s shortcomings.

Kevin Nolan has been in charge at Meadow Lane since January 2017, initially lifting County away from the relegation zone and into the top six last season. He has pleaded for patience among the fans as his reshaped squad beds in, but also expressed his excitement at the way the team is coming together.

Nolan should get some help from the locals, for there is a healthy momentum in terms of support from the fans. In 2015-16, average crowds at Meadow Lane were just 4,860 but two seasons on, they were almost at 8,000 – the best figure since 1993-94 when the club was playing two divisions higher than today. It’s a long way from the early post-war years when Tommy Lawton played for the club, but 8,000 is not bad. Chairman Hardy was hoping for 6,000 for the opening day against Colchester, as it turned out he got more.

Groans amid the heat

What Hardy and his manager, or the crowd of 7,136 , didn’t get was much in the way of entertainment. It was just three weeks after the World Cup final, Britain was still in the midst of an unprecedented heatwave and it really seemed too early for football – watching it or playing it. Perhaps it was too much to expect a rebuilt team to come out of the blocks in a blaze of glory. As for Colchester, they were bright only in their attire (bright green kit) rather than their performance, which was limited. They, too, had undergone close season surgery.

Boldewijn had an early shot pushed round the post by Colchester’s Dillon Barnes and at the start of the second half, Nathan Thomas controlled the ball well before seeing his volley tipped over by the keeper. Late in the day, Colchester’s Tom Eastman struck the woodwork from the edge of the penalty area. That was it, really – three shots on target between them. You could sense some frustration from the home fans as the game petered out, notably one stand-out middle-aged fellow with his son who berated a steward who asked him to keep moving as he walked out for fear of impeding people’s view of the game. His response, littered with expletives and aggression, hinted he had expected more from his Magpies. “It can only get better,” was the narrative among the crowd as they filed past red-bricked Iremonger Road and the streets surrounding Meadow Lane.

Goalless it was. Not pretty for the fans, but both managers tried to spin the positive saying they were kind of happy with the result. Nolan took the “it’s a clean sheet” approach and praised his hard-working team while Colchester’s John McGreal said his boys were “excellent”. There’s no doubt the weather didn’t help. In the Pavis stand, a middle-aged woman, over-heating and under-interested, sat and dozed for most of the second half.

Football supporters, if they are honest, will reveal that the least stimulating part of a day out is often the 90 minutes on the field of play. This is, essentially, the element of the great fan experience they cannot control. Colchester’s loyal crew, on their long journey back to Essex, not doubt consoled themselves in the knowledge their team had won its first point of 2018-19. As for Notts County, it is definitely a case of work in progress and for a few weeks, at least, Kevin Nolan will be afforded the luxury of supporter understanding as his new faces become more familiar and a pattern develops. They’ve had some rough times in recent years, have Notts County (founded 1862) but it was good to see that one of the “original 12” still possesses ambition and a dose of that hard-to-shake-off football affliction – expectation. Long may that continue.