Celebrating the stars of David 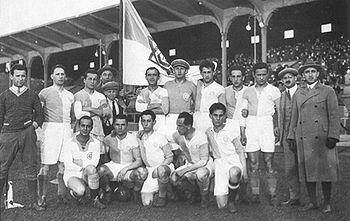 RELIGION AND FOOTBALL. There’s lots of similarities. For many people, football has replaced religion – just take a look at the plethora of banners proclaiming that xyz United is “More than a club”, or those that urge the fans to “keep the faith”. And next time you watch a televised match, observe the substitutes going through their ritual of crossing themselves, in best Vatican fashion, as they take the field of play. They are hoping for some divine intervention as they go into battle.

The Jewish faith has a long history with the world’s favourite sport, and it’s currently being celebrated at London’s Jewish Museum in an excellent exhibition called, Four Four Jew. Yes, Judaism and football are no strangers, but in Britain it’s not necessarily on the pitch. There have been precious few professionals of note in the Football League, the most telling influence has definitely been in the boardroom.

It may have just a little to do with the fact that, historically, Saturday was football day, but it was – and is –  also the Shabbat. Those that did bend the rules and manage to get out to play were often taunted with cries of, “Does your Rabbi know you’re here”. In Europe, it may have been easier, because traditionally, football has been played on Sunday since time and memorial. In Central and Eastern Europe, the Jewish influence on the game was notable, especially in places like Vienna.

In the Austrian capital, FC Hakoah was an all-Jewish club that, for a short time, became the talk of the Viennese coffee houses. They proudly wore the star of David on their shirts, long before the Nazis made a badge of incrimination out of it. They were a shrewd bunch and were the first club to make use of marketing themselves, at home and abroad.

The club was established by a cabaret artist, Fritz Loener (who later perished in a concentration camp) and was based on the “muscular Judaism” concept preached by Max Nordau, calling on Jews to demonstrate their vitality. It was not easy for Hakoah, who would often take the field to taunts of “Jewish pigs” when their star of David came into view. But with the ball at their feet, they played innovative football that may have been a forerunner to the great Austrian side of the 1930s. Hakoah won the Austrian league in 1925 and then went on tour to the United States, where they captivated the Baseball-hungry Americans.

In the US, four of their 11 games were on the Shabbat, which angered the club’s players. Hakoah also received some criticism that their tour and ethos was merely promoting Zionism, but that did not stop huge crowds attending their games. Players like Sandor Nemes and Bela Guttman became sought-after figures. Guttman went on to lead Benfica to two European Cups in the 1960s.

In 1938, the Anchluss put paid to FC Hakoah, but the club, now known as Maccabi Vienna FC, is alive today and they’re back at their home close to Prater Park in the city. 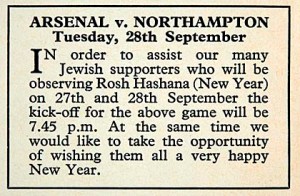 In Britain, Jewish immigrants were attracted to football in the early part of the 20th century. The link between Judaism and Tottenham is part of folklore, with the assumption that the club’s proximity to the largest Orthodox Jewish community being the reason. Not so, say the transport historians. Tottenham benefitted from the extension of the city’s tramways and given that on the Shabbat, use of vehicles driven by combustion engine was forbidden. The electric trams allowed the club’s Jewish followers to visit the synagogue and then go onto the match. It was simpler to travel to White Hart Lane than some of the club’s neighbours. And so history is shaped!

In December 1935, just a few months after the anti-semitic Nuremberg Laws went into effect in Germany, White Hart Lane was the scene of an international match with Germany that incensed the local Jewish communities and anti-fascists in London. “Jews up in arms,” said the headlines, but the game went ahead and, macabrely, the Nazi Swastika flew above the main stand at Tottenham. There was similar outrage when Manchester City signed German Prisoner of War Bert Trautmann, but a local Rabbi pleaded for Mancunian Jews to “give the man a chance”. Eventually, it was the club’s Jewish fans that embraced the likeable German.

During the second world war, there were moves to form a Judeans FC, but this failed because games were scheduled for Saturday. In 1946, however, Wingate FC was formed in North London, an all-Jewish club. In 1991, Wingate merged with Finchley and the club plays on today, residing at the Harry Abrahams Stadium, named after a Jewish sporting legend of Chariots of Fire fame. 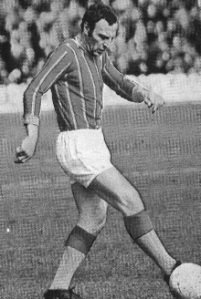 Mark Lazarus, one of the few notable Jewish professionals, started out with Wingate. With the build of a boxer and a direct, bullish approach to the game, Lazarus was the archetype London football journeyman. He played for Leyton Orient, Queens Park Rangers, Brentford and Crystal Palace. But it was with QPR that he will be remembered, as the first Jewish professional to play at Wembley (although that may be debatable). He was certainly the first to score a winning goal in the final at Wembley, QPR’s third in their 3-2 win against West Bromwich Albion in the Football League Cup final.

Lazarus said that he did come up against anti-semitism, but he was able to look after himself. Judging by his appearance, he still can!  Barry Silkman also encountered prejudice, his so-called “Jewfro” hairstyle marking him as a target with unsympathetic supporters. Silkman was something of a Malcolm Allison acolyte, playing for “Big Mal” at both Manchester City and Crystal Palace. Silkman’s wise-cracking style is no doubt useful in the world of football agents he now circulates.

But it is in business administration and journalism that the Jewish influence is more relevant. In 1961, Anglo-Jewish writer, Brian Glanville, whose family changed its name from Goldberg, wrote:

“The Jewish professional might see in football management a career for his future. Brains, education, drive, intelligence are pathetically lacking in this field; the game cries out for better leadership.”

Glanville, the doyen of football writers, may have been speaking today!

Boardrooms the football world over have been occupied by business-savvy Jews. And it’s not confined to London. Leeds United had Manny Cussins and then Leslie Silver at the helm, and the Manchester United dynasty of Louis and Martin Edwards was only half-gentile. United’s current owners, the Glazers, are also Jewish. In London, Tottenham’s current chairman, Daniel Levy maintains the long connection at White Hart Lane, while rivals Arsenal have had a succession of Jewish officials, notably David Dein. Roman Abramovich at Chelsea and David Gold at West Ham underline the Jewish presence across the capital’s major clubs.

The Four Four Jew exhibition is revealing and fascinating and confirms that Jewish football fans, like any other, are passionate about their clubs. Why else would they have  skull-caps, or to use their proper name, yarmulke, knitted in club colours?  If nothing else, it shows that while they are following their faith they also have their heroes very much on their mind….

Categories: Culture
No comments yet…