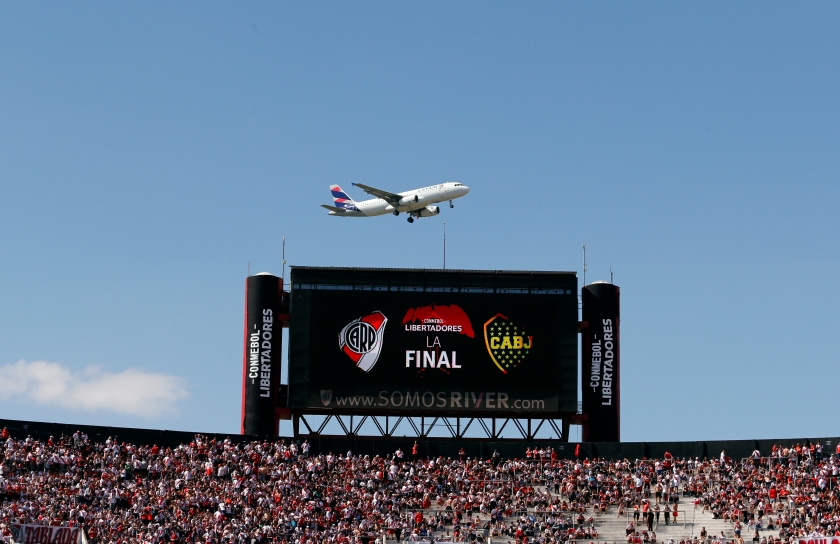 THE Libertadores Cup final second leg may (or may not) be played in Madrid, giving the game an unprecedented level of profile, and not just because of the adverse headlines that the twice-aborted clash between Boca Juniors and River Plate has attracted.

Madrid is not a terrible choice, it is certainly better than any Middle-Eastern or US location – games played in the desert do not attract great attention, no matter which teams are involved – but the fact that CONMEBOL have had to export their blue riband competition reflects poorly on the confederation and highlights a shambolic turn of events.

And what does it say about Argentinian football? It has taken a few body blows to its reputation in recent years and this sad story will only serve to chip away at its ailing credibility.

There’s always been something of a feral quality about Latin American football, which creates an intoxicating atmosphere, but all too often boils over into disorder. Around half a dozen people have died at Argentinian football matches this year. In Europe, people rightly shook their heads at the way Liverpool fans attacked Manchester City’s coach before a UEFA Champions League tie, but this was altogether more worrying, more akin to civil unrest. Even after two days, they could not get things under control, hence two postponements.

Out of all this, the Libertadores has received more publicity worldwide than it has in decades. Boca v River was billed as the biggest club game on earth and to a certain degree it rivals, and even exceeds, Real v Barca. South America, in this modern football age, needs clubs that can represent it on a world stage – not just as runners-up in the FIFA Club World Cup – and it is logical and proper that cities like Buenos Aires, Rio and Sao Paolo provide them. Both Boca and River are tourist attractions for those with the ambition and resources to venture into CONMEBOL territory, will they be quite so appealing in the future?

Not only has the Libertadores affair muddied the waters on the western shore of the Rio de la Plata, depicting Argentina as a somewhat wild place, but it has also suggested the country’s security services cannot control its football fans and that darker forces may be at play. The country’s President, Mauricio Macri (a Boca fan and former president of the club) was quick to denounce criminal fan organisations, the so-called “Barras Bravas” that are known for drug dealing, extortion and protection rackets. As the world’s political leaders arrived in Buenos Aires for the G20, an additional embarrassment for Argentina, he rejected any claims that local mafia bands were behind the recent troubles. He’s now looking to pass some new laws in congress to combat football violence, including stiffer penalties for offenders.
Away fans are already banned in Argentina for games involving the big clubs, so the Superclásico is not fully accessible, but the violence and disruption took place outside the confines of the stadium. British fans will doubtless recall that most of the organised violence in the heyday of football hooliganism – which almost destroyed the fabric of the game in England – was away from the grounds themselves.

Yet the most recent example of extreme violence in games between Boca and River was inside Boca’s Bombonera stadium, a Libertadores round of 16 tie in 2015 that saw Boca fans pepper-spray River’s players.

If Boca and River hate each other so much, to such an extent that they are willing to commit crimes that push the boundaries, they may like to reflect upon the importance of the Boca-River dynamic and its value to Argentinian football.

In the current climate, South America has fallen way behind Europe in terms of competitiveness. Argentina’s players are among the most sought-after in the world and its top clubs are always eager to sell their talent abroad. This is a country that has 13 million people living behind the poverty line, so football clubs cannot depend on high levels of income from supporters. Argentinian clubs, like Brazil’s top football institutions, need to regularly export players to raise much-needed capital.

Clubs like Boca and River need each other in so far that their presence spurs the other on to continually benchmark themselves, remain competitive and reach for improvement. Local rivalry, wherever you are, provides the creative impetus needed to avoid complacency. A good example of what happens when there is no rivalry, when the fire of passion threatens to become extinguished, is in Glasgow where Rangers were relegated and out of Celtic’s way. Scottish football needs the “old firm”, just as Argentina needs the Superclásico.

While this Superclásico is arguably little different from the past, the fact that it was billed as the greatest match ever for the South American continent, and a unique Libertadores final, has raised its profile and global awareness level to an all-time high. The violence, the red-faces, the confusion has been played out in the world’s media to such an extent that it cannot be hidden or footnooted.

It does not take long for some people to sneer at Argentina and its football, going way back to Antonio Rattin and Sir Alf Ramsey’s politically incorrect condemnation, and into the 1980s with the Falklands and Maradona and his “hand of God” proclamation.

Regardless, there is also huge affection for the swaggering style of football, the romance of the Tango, the legacy of Di Stefano, Kempes, Ardiles, Maradona (in his pomp) and Messi, and those cool blue and white striped shirts. If only Argentina realised it, we want them to have decent and inspiring football teams, long to see players that the likes of Messi can hand the baton on to with confidence. It is far more important than just a seemingly doomed Copa Libertadores final.