IN 1980-81, Dinamo Tbilisi put on a scintillating display when they met West Ham United at Upton Park in the European Cup-Winners’ Cup. They won emphatically by playing a brand of fast, attacking football that stunned the London crowd. “Those Russians, bloody marvellous football,” said one Hammers fan as he left the stadium. “I’ve not seen football like that since we had Moore, Hurst and Peters at the club.”

Russians? The old USSR tarnished everyone with the same brush. These were Georgians elegantly scything their way through the West Ham defence. To some, Georgia was a southern state in the US, not a eastern European country absorbed by the Kremlin. But at the time, it was part of the Soviet Union and therefore considered to be mysteriously Russian.

The Soviet Union won just three European prizes, all in the European Cup-Winners’ Cup: 1975 Dynamo Kyiv, 1981 Dinamo Tbilisi, 1986 Kyiv again. In other words, not one Russian prize but two for the Ukraine and one for Georgia.

Dinamo Tbilisi’s current position makes it hard to believe that back in the 1970s, they played in front of very big crowds – in 1977, their average gate was an astonishing 68,200. Today, they attract just 700 to their home games.

Dinamo were a de facto national team for Georgia in the days of the Soviet Top League. In 1964, they won their first title, beating Torpedo Moscow in a play-off by 4-1. This was a team that was boosted by the goals of Ilia Datunashvili and Slava Metreveli, the latter playing in three World Cups for the USSR – 1962, 1966 and 1970. Metreveli was also a member of the Soviet team that won the 1960 European Championship, scoring one of the goals in a 2-1 win. 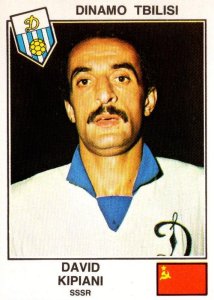 Dinamo won the Soviet Cup in 1976 and the title again in 1978 before picking up their second cup victory in 1979. That year, Dinamo pulled off a major surprise when they knocked Liverpool out of the European Cup in the first round. They lost the first leg 2-1 at Anfield, but won 3-0 in front of 90,000 people at the Dynamo Lenin Stadium.

This woke people up to the fact that there were some outstanding footballers in parts of Europe that didn’t get much in the way of limelight. Tbilisi was a place that few people knew much about. During Soviet rule, the city became increasingly industrialised but was also an important political and cultural centre. In 1980, the city hosted the first state-sanctioned rock festival in the USSR, which was dubbed by critics as the “Soviet Woodstock”.

The Tbilisi team of 1980-81 made a similar impact, with four players, Aleksandre Chivadze, Vitaly Daraselia, David Kipiani and Ramez Shengelia all making their mark as outstanding individuals. If they had been playing in western Europe, they would have been sought-after by all the top clubs. As it was, Shengelia (7th), Chivadze (8th) and Kipiani (11th) were all placed highly in the 1981 Ballon d’Or voting.

Chivadze was an excellent centre half and captained the team. A one-club man, he was Soviet footballer of the year in 1980 and was in the USSR World Cup squads in both 1982 and 1986 and won 46 caps in total. He later became coach of Georgia.

Daraselia, who was 24 years of age in 1980-81, was the engine of the Dinamo team, a compact player with boundless energy. Born in Abkhazia, Daraselia signed for Dinamo as a 17 year-old from Amirani Ochamchire. He was introduced to the Dinamo team in 1975 and won the first of his 22 caps in 1978. He played in the 1982 World Cup and afterwards, Dinamo coach Nodar Akhalkatsi decided to rebuild his team around the talented midfielder. Sadly, on December 13, 1982, Daraselia died when his car crashed over the edge of a cliff into a river near Zestaponi in Georgia. He was just 25 and at his peak as a player, who knows what might have been achieved, by him personally and by his club?

Kipiani was considered to be one of Georgia’s greatest-ever players and an elegant and skilful playmaker and dribbler. Had he been playing outside the Soviet bloc, he would have probably been compared to some of the top names in European football. Nicknamed “Dato”, he was heavily influenced by the Dutch “total football” and saw himself very much in that mould. Unlike Cruyff and co. Kipiani never played in a World Cup – there have been conspiracy theories that the USSR team may have had too many Georgians if Kipiani had been included for 1982. He was recovering from a broken leg sustained in 1981 and although he had been in good form, was omitted from the early squad for Spain. The disappointed forced him to retire in 1982. Sadly, in 2001, he also died in a car crash. Shengelia, who also died young, was strong and quick and anticipated the game intelligently. He scored 184 goals in 445 games for Dinamo Tbilisi and won 26 caps for the USSR.

Dinamo won the Soviet Cup in 1980, beating Dynamo Moscow on penalties in the final and qualified for the Cup-Winners’ Cup. It wasn’t an especially strong field, although Celtic, Benfica and Feyenoord were in the mix. Dinamo were paired with Kastoria of Greece in round one. A 2-0 aggregate victory sent them through to face Ireland’s Waterford in round two, which ended with a very comfortable 5-0 win over the two games.

As the competition reached its crucial stages, West Ham United of the English second division were next. This is when people really took notice of Dinamo. At Upton Park on March 4, 1981, the relatively unknown Tbilisi team put on a display of devastating counter-attacking football. West Ham, who included the likes of Trevor Brooking and Alan Devonshire in their line-up, were made to look very pedestrian and Dinamo’s performance earned them a 4-1 first leg win and respectful applause from the home crowd. The tie won, they slipped up at home, losing 1-0 to the Hammers.

In the semi-final, Dinamo faced Feyenoord, but Kipiani was at his best when they won 3-0 in Tbilisi. That first leg win was just enough, for in Rotterdam, the Dutch won 2-0. Dinamo’s opponents in the final would be the East German’s Carl Zeiss Jena, who had won through against Benfica in the semi.

The final between Soviet and East German sides didn’t capture the imagination of the viewing public. UEFA allocated the game to Düsseldorf’s Rheinstadion, but only 4,750 people turned up to watch, the lowest ever crowd for a major European final. The subdued atmosphere was matched by the dour nature of the game.

Jena took the lead after 63 minutes through Gerhard Hoppe, a spectacular volley from close range. Within four minutes, Dinamo levelled with a low drive from Vladimir Gutsaev, created by Shengelia. With four minutes to go, Daraselia netted a memorable winner, beating two men before switching to his left foot and driving inside Hans-Ulrich Grapenthin’s right hand post. It was a truly spectacular goal, underlining the potential of Daraselia.

Tbilisi went berserk in celebration, the victory was seen as a triumph for the Georgian state. Dinamo Tbilisi went down in history as one of the last great teams from the old USSR, their players heralded as some of Europe’s genuinely hidden gems. Dinamo Tbilisi will never be forgotten for the way they won the Cup-Winners’ Cup in 1981, but equally, we will never truly know how good they might have become had fate not stepped in.