EINTRACHT FRANKFURT reached their first UEFA semi-final since 1980 when they overturned a two-goal deficit to beat Portugal’s Benfica on away goals in the last eight of the Europa League.

Eintracht may not be regular European contenders these days, but the club played its part in one of the most famous matches of all time, the 1960 European Cup final which they lost to Real Madrid by 7-3 at Hampden Park. Eintracht were German champions in 1959, their only title, and had the audacity to take the lead after 18 minutes. The likes of Di Stefano and Puskas made them pay for that and Die Adler(the Eagles) were on the end of a drubbing.

Frankfurt is not considered to be a hotbed of football in the Munich sense, the city is better known as the financial centre of Germany, Finanzplatz Frankfurt. It is the home of the European Central Bank and other major companies such as Deutsche Bank, Deutsche Bundesbank and Holzmann. Frankfurt is the biggest and most important financial hub in continental Europe and is hoping to capitalise on the United Kingdom’s exit from the European Union. The city on the River Main is often unfairly criticised for lacking character, but does include the most spectacular range of tall buildings, earning it the nickname of Mainhattan. 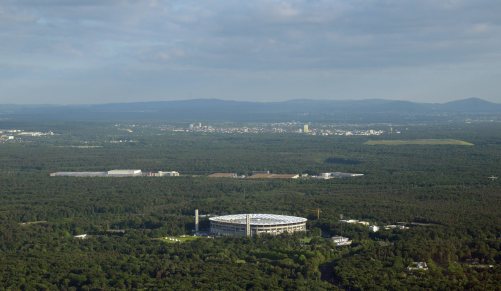 There are few more international or cosmopolitan cities in Germany than Frankfurt. It has a population of 750,000 and a big expatriate community, the majority of which are employed in the financial sector. Its airport is one of the busiest in Europe.

Frankfurt is also the home of the Deutscher Fußball-Bund (DFB), the game’s governing body. It was founded in 1900 in Leipzig but is now based close to the Commerbank Arena, the home of Eintracht Frankfurt and an impressive ground that was once known as the Wald Stadion. The stadium has been refurbished several times down the years and was one of the 2006 World Cup venues. It has a retractable roof and a capacity of 51,500. It’s just a short train journey from the airport and has its own station. Frankfurt was buzzing during the World Cup, with games also being shown on the river Main for crowds to enjoy. The city, indeed the whole of Germany, put on an excellent show for FIFA.

Eintracht Frankfurt were founded in 1899. Their most productive period was in the 1970s when they won the DFB Pokal twice and finished in the top four of the Bundesliga. Their team included players like Jürgen Grabowski, Juup Heynckes and Bernd Hölzenbein.

In 2018-19, Eintracht are enjoying something of a resurgence, which is not necessarily good news for Europa semi-final opponents Chelsea. They are currently fourth in the Bundesliga and their Europa League run builds on their 2017-18 DFB Pokal triumph over Bayern Munich in Berlin.

Their attacking style has made them popular with neutrals. The club has a good relationship with its fans, engaging with them over a broad range of issues. Curiously, after beating Benfica in the Europa quarter-final, their fans, who had created a fantastic atmosphere, pushed over a barrier in their eagerness to celebrate with their players, but they did not invade the pitch. 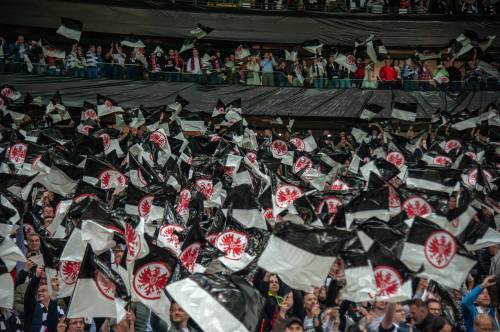 The close season saw a mass influx of new players, including Eintracht’s former goalkeeper Kevin Trapp, Paris Saint-Germain’s goalkeeper, who returned on loan with a view to a permanent move. Trapp was one of the heroes in the Europa tie with Benfica, pulling-off a late save and turning the ball against a post.

At the other end, Eintracht have been boosted by the goals of Luka Jović, a 20 year-old Serbian striker who originally joined the club on loan from Benfica. Eintracht have been so pleased with their young goal poacher that they triggered the EUR 7 million loan-to-buy clause.

Jović became the youngest player to score five goals in a Bundesliga game when Eintracht beat Fortuna Duesseldorf 7-1 this season. As well as Jović’s 17 goals, France under-21 international Sébastien Haller has netted 14 times in the Bundesliga.

In the Europa League, Eintracht have been in excellent form, winning all six of their group games against Lazio, Apollon Limassol and Marseille. In the round of 32, they beat Shakhtar Donetsk and then overcome Inter Milan (a notable away win) before disposing of Benfica.

Adi Hütter took over as coach in May 2018 after Niko Kovač joined Bayern Munich. Hütter, an Austrian, was previously coach at Young Boys Bern and before that, Red Bull Salzburg. Eintracht made a poor start under their new manager, losing three of their first five games in the league. They have lost just once in the Bundesliga in 2019 and their most recent run of five consecutive victories ended on April 14 with a home defeat against Augsburg. Eintracht’s average gate in 2018-19 is 48,475 making them the seventh best supported club in the Bundesliga. 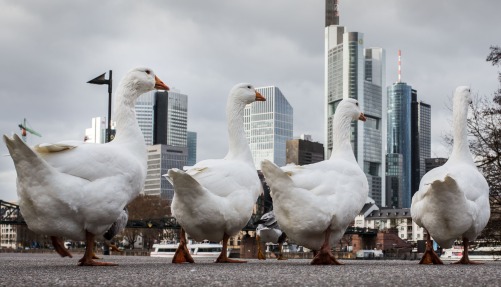 Crowds at Frankfurt’s other clubs are not so impressive. FSV Frankfurt, a club that was runner-up in the German championship in 1925, play in front of around 1,300 people at the 12,000 capacity Frankfurter Volksbank Station in the Bornheim district of the city. FSV play in the Regionalliga Sued West and in 2018-19 are below mid-table. As recently as 2016, FSV were in 2.Bundesliga when they were relegated to 3.Liga and they suffered a second consecutive demotion in 2016-17.

Even lower down the German football pyramid are Rot-Weiss Frankfurt, who date back to 1901 and have had a number of identities, including Frankfurter FV Amicitia and SG Bockenheim, the district where the club resides today. Their home is the Stadion am Brentanobad and they compete in the Hessenliga.

Frankfurt may never be as “sexy” as Berlin, Munich or Hamburg, but its top football club, which plays entertaining, powerful football, can help change its image. It is an extremely accessible city and one that acts as a gateway to all corners of Europe. Chelsea have a very tough task when they travel to Germany – Eintracht, after all, are a top four Bundesliga club – one that may, eventually, elevate Frankfurt-am-Main to a similar status to more celebrated football cities in Germany.