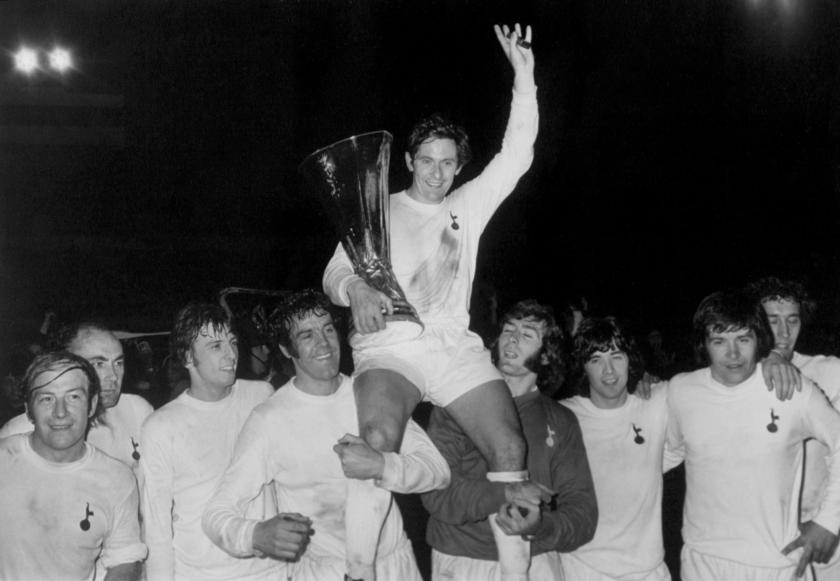 IT IS hardly surprising, but when Tottenham Hotspur’s great teams and players are discussed, the conversation rarely moves beyond 1951 and 1961. The latter’s achievement, the then-hallowed double, would be something of a millstone round the neck of the club and its long-serving manager, Bill Nicholson, but 10 years on, Spurs did manage to rekindle some of the lustre of old and put together a team that could look Danny Blanchflower’s side in the eye.

Admittedly, Spurs never won the league, but they picked up two Football League Cups and the first ever UEFA Cup in between. With a little more consistency, they might have achieved more, but between 1970 and 1972, Spurs played some great football and had some excellent players in their ranks. In fact, the sequence of three cup wins might have been four if they had not come up against the total footballers of Feyenoord in the 1974 UEFA Cup final, an occasion that proved to be the catalyst for ending Nicholson’s distinguished career.

Nicholson’s team of the early 1960s, quite rightly, is compared to the all-time greats. But even with the addition of Jimmy Greaves in 1962, Spurs could not recreate that golden era. As the 1960s wore on, Spurs slipped from their pedestal, although they won the European Cup Winners Cup in 1963 and finished League runners-up the same year. As the double team broke up, Spurs found it hard to replace them and by the end of the 1960s, they were struggling to hang on to a top six place. In 1969-70, they finished 11th, their lowest position since 1958-59. That season had seen the spirit of “Glory Glory” further eroded with the departure of Jimmy Greaves to West Ham, in an exchange deal that brought the younger and more virile Martin Peters to White Hart Lane. The 1969-70 season saw Spurs score just 54 goals in the league, a post-war low. Greaves was past his best and the man who many saw as his heir, Martin Chivers, was still trying to establish himself, more than two years after joining from Southampton. Another icon from the old days, Dave Mackay, had also gone, lured to Brian Clough’s Derby where he built a new swansong career. With players like Pat Jennings, Cyril Knowles, Mike England, Alan Mullery and Alan Gilzean, there was no shortage of quality, but Spurs lacked strength in depth and a real cutting edge. There was no hint, in the summer of 1970, that Nicholson’s frustrations were at an end. 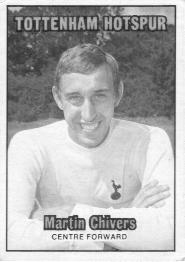 Martin Harcourt Chivers (where did he get that middle name from?), when he joined Spurs, was seen as a major signing to trigger off a new Spurs. He played a key role in Southampton’s promotion to the top division in 1966, scoring 29 goals, but in the first division, he was overshadowed by Ron Davies. He netted 118 league goals in 278 games for the Saints, commanding a record £ 125,000 fee from big-spending Spurs. Injuries and a loss of confidence plagued Chivers in his first two seasons at Spurs, but when Greaves departed, he stepped out of the shadows.

There was an added reason for Spurs to step up a gear in the summer of 1970. Arsenal had won the Inter Cities Fairs Cup in 1969-70 and Chelsea had lifted the FA Cup. Spurs were in danger of being upstaged in the capital. With Chivers fit, Peters acclimatised and young talent like Steve Perryman now part of the first team, along with England regular Mullery, Spurs had a revitalised team. Nobody gave them much chance of anything at the start of 1970-71, in London all eyes were on Chelsea, who many felt would push on from their FA Cup win and make a real fist of a title challenge.

Spurs started slowly, with a 2-2 draw with West Ham at White Hart Lane, Alan Gilzean scoring both goals. At the beginning of September, they were beaten at Arsenal, who were shaping up well for the new season. Then Spurs went on an impressive run, beating Liverpool, Manchester City and, at the start of November, put on a sparkling performance for the TV cameras against Burnley. It was a 4-0 win for Nicholson’s resurgent team and Perryman’s display – capped by a nicely created goal – announced his arrival. Spurs has to travel to Chelsea, who were also clicking into gear, although not as comfortably as they had been in 1969-70. Spurs were in third place, two points behind leaders Leeds and two ahead of Chelsea in fourth. Over 61,000 people saw a game played in attritional mud and Spurs snatched the points with two injury time goals. People now started to take notice of Spurs.

But it was the Football League Cup that was to provide Spurs with a taste of glory. They eased their way through the competition thanks to home ties against Swansea City (3-0), Sheffield United (2-1), West Bromwich Albion (5-0) and Coventry (4-1), Peters and Chivers scored hat-tricks in the latter of those games. That run put Spurs into the semi-finals against Bristol City of the second divison.

The first leg at Ashton Gate ended 1-1, making Spurs red hot favourites to win through. And that they did, by 2-0, with Chivers and Jimmy Pearce scoring. Their opponents would be third division Aston Villa. Spurs only had to make sure they didn’t treat Villa lightly to win the Football League Cup for the first time.

They made hard work of it, though. Needless to say, the matchwinner was Chivers, who could do no wrong in 1970-71. He was now an England international, in fact, Spurs provided three of Sir Alf Ramsey’s new England –  Mullery, Peters, Chivers were the new Moore-Hurst-Peters! Chivers scored 34 times that season.

Spurs won 2-0 at Wembley, two Chivers goals in the second half killing off a spirited Villa side. While their league form stuttered, they recovered their poise to end the season with just one defeat in 13 games, finishing third behind Arsenal and Leeds. It hurt, a little, that the Gunners won the title at White Hart Lane, and went on to secure the double, thus equalling Spurs’ 1961 record. Spurs, though, were back in Europe.

Nicholson strengthened his squad with the signing of Burnley’s Ralph Coates in the summer of 1971. It was London’s biggest transfer of the close season and once more underlined Spurs as the “Bank of England club”. Nicholson liked to make a statement signing every year to sell season tickets. Coates was one of those players that stayed with an unfashionable club for perhaps too long – a la Rodney Marsh and Don Rogers – but he was also another England international.

Goal magazine tipped Spurs to win the Football League Championship, but they were never consistent enough to mount a serious challenge. It didn’t help that £ 190,000 capture Coates took time to settle.

In the UEFA Cup, they enjoyed a roller-coaster ride to the final. Keflavik of Iceland were no problem, Spurs winning through to the tune of 15-1 on aggregate over the two legs. Then came Nantes of France, who gave Spurs two tough games and only went out 1-0 on aggregate, Peters scoring the only goal in the second leg at White Hart Lane.

Two bruising encounters with Romanians Rapid Bucharest followed, with Nicholson incensed after the second meeting that his team had been kicked and punched for 90 minutes. But Spurs won 5-0 on aggregate, so the last laugh was on them.

Another Romanian side, UT Arad, were next, with Spurs doing all the hard work in the first leg, winning 2-0 away and overall, 3-1 on aggregate. It set them up with a semi-final against Italians AC Milan. This was a severe test for Nicholson’s side. Perryman was the hero at White Hart Lane, scoring twice as Spurs beat the Serie A aristocrats 2-1. Mullery, who had been out on loan to Fulham to help him recover from a pelvic injury, came back to score at the San Siro in a 1-1 draw. The fires were burning on the terraces as Spurs hung on to claim a famous win.

If there was disappointment, it was because the final was between two English clubs. Wolves had won through against some tough opposition and were worthy of their place, but it just didn’t seem like a European final. The first leg at Molineux was won 2-1 by Spurs, which almost killed the tie. Chivers was on song, scoring both goals (his tally reached 44 in 1971-72). In the return, Mullery headed Spurs in front early on and the late Davd Wagstaffe levelled for Wolves, who then battered the home defence. Spurs held out and won their second piece of European silverware.

Having won the League Cup and UEFA Cup, Spurs almost won both in 1972-73. Their league form was marginally better than mid-table, but they won the League Cup again by beating Norwich at Wembley by 1-0. Coates scored the winning goal to repay some of that huge fee. In the UEFA Cup, they were denied a place in the final against Borussia Moenchengladbach by League Champions Liverpool. They lost the first leg 1-0 at Anfield and although they won 2-1 in the second meeting, the Reds won through on the away goals rule. 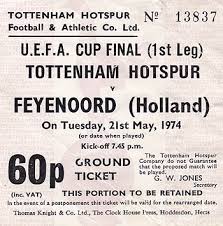 In 1973-74, London football took a sharp downturn and Tottenham’s domestic form was no exception. But in the UEFA Cup they enjoyed another good run, beating Grasshoppers Zurich, Aberdeen, Tbilisi, FC Koln and Lokomotiv Leipzig on the way to the final. There they met Feyenoord, a well-tooled outfit with half the Dutch national team in its line-up. Spurs were held 2-2 at home before losing 2-0 in Rotterdam amid crowd violence and pleas from Nicholson for calm. The behaviour of the Spurs fans and growing disillusion at the way the game was developing led their manager to call it a day only a fortnight into the following season. In 1977, Spurs were relegated.

The Spurs team of the early 1970s had some moments of sheer brilliance, but they were forever in the shadow of Nicholson’s first great side. Players like Chivers, Peters, Jennings, England and Mullery remain ingrained in the club’s folklore. They didn’t quite have what it took to be title contenders, but in those days, a trophy a year was an impressive feat. It would be today…