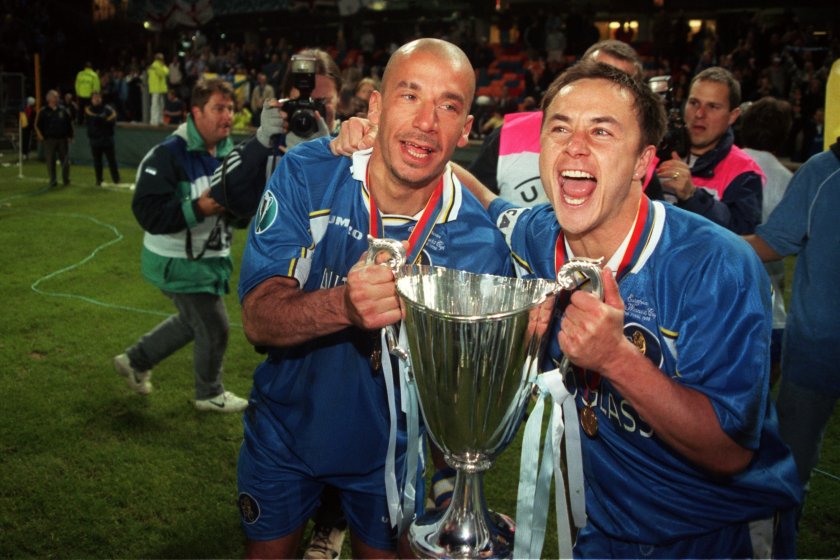 THIRTY years ago, it would be nigh on impossible for one country to provide all the European finalists. The only way it could have happened was if the holders of the European Cup and European Cup-Winners’ Cup were English and the qualifying clubs from England were not the holders.

In 1971-72, we had a UEFA Cup final between Tottenham and Wolves – a competition where a number of clubs from the same country were admitted.

In that two-legged final, Wolves’ team comprised eight Englishmen, one Northern Ireland international and two Scots. Spurs had one Northern Irishman, one player from the Eire (as we called it then), eight Englishmen and one Scot. It was, essentially, a clash of two English clubs and just one player from outside the United Kingdom. Spurs and Wolves were owned and run by British folk. They had five England internationals in their line-up – Cyril Knowles, Alan Mullery, Martin Chivers, Martin Peters and Ralph Coates. Steve Perryman would eventually gain a cap.

Times change and the English game is very different, no longer the place where Englishmen ply their trade at the top level, but instead we have fantasy football elevens of hired guns earning vast sums of money. The clubs are owned by foreign investors and the fanbases have become global. Tottenham and Wolves, for example, are no longer the property of local fans, they are mini corporations that have built a “franchise”. Spurs, as an example, are no longer representative of London N17, an area of London that is very cosmopolitan and has a high crime rate. The average Spurs fan might well come from Stevenage, Welwyn Garden City or Leigh-on-Sea

Spurs have tenuous British ownership in the form of ENIC Group, which is owned by Joe Lewis (via the Bahamas-based Tavistock Group) and club chairman Daniel Levy. ENIC’s Bahamas-registered subsidiary, ENIC International, holds 85.55% of the club. The club has a reputation for including English players, but against Ajax in Amsterdam, only three made the team.

Liverpool, who will face Spurs in Madrid after battling out one of the tightest league title races in history, are owned by American investors. Their starting line-up against Barcelona in the Champions League semi-final included just three Englishmen. Their manager is German. Liverpool have fans from all over the world. In other words, this is not a team of scousers, fed on the spirit of Shankly.

Similarly, Chelsea is Russian-owned, has an Italian manager and their team kicked-off their Europa League semi-final second leg with just one English player, Ruben Loftus-Cheek. Arsenal are now in the hands of an American and also fielded one Englishman, Ainsley Maitland-Niles.

On the face of it, this quartet of clubs represent globalisation more than “Englishness” and they are not standard-bearers for a resurgent England team. The soul of English football sold out to mammon long ago and what we are seeing today is the result of a period where Premier League clubs benefitted from the enormous gifts pushed their way by sponsorship and broadcasting. That’s the way it is, and despite some people claiming they are against modern football, the waiting lists and sell-out crowds suggest that somebody certainly enjoys it.

Multiple finalists has been done before, though. It is tempting, and in the spirit of “presentism” to believe that football began in 1992-93 with the inauguration of both the Premier League and Champions League. But in 1990, Italy provided four finalists and won all three UEFA competitions. AC Milan won the European Cup (Benfica 1-0), Juventus lifted the UEFA Cup ( beating Serie A stablemates Fiorentina 3-1 on aggregate over two legs) and Sampdoria won the Cup-Winners’ Cup (Anderlecht 2-0).

With the World Cup in Italy approaching at the time, many people saw this triple crown as a pointer to the likely winners of the competition in 1990. AC Milan, who provided four of Italy’s team in their first game in the World Cup, were a stunning team, but their stars were not Italian. Three Dutchmen, Ruud Gullit, Marco van Basten and Frank Rijkaard, made Milan an irresistible force. They still had some outstanding Italians, notably Franco Baresi, Carlo Ancelotti and Paulo Maldini, but Serie A’s ability to attract foreign talent was unmatched at that moment in time. Juventus and Sampdoria were almost 100% Italian teams and needless to say, in 1990, Italians owned Italian clubs. The UEFA treble was very much born and raised in Italy.

English clubs, once they had got their feet under the European table, started to win regularly in the late 1960s and early 1970s. Tottenham won the first European prize, the Cup-Winners’ Cup, in 1963 and West Ham followed two years later in the same competition. In 1968, Manchester United and Leeds United were both successful in the European Cup and Inter-Cities Fairs Cup (a non-UEFA competition) respectively.

In 1969-70, England went very close to scooping the treble. Arsenal and Manchester City secured the Fairs Cup and Cup-Winners’ Cup and Leeds were beaten in the semi-final of the European Cup by Celtic. On two other occasions, 1972-73 and 1983-84, a similar tale unfolded. As has been well documented in the movie, The Damned United, Derby County were controversially dumped out of the European Cup at the semi-final stage. Meanwhile, Liverpool won their first European prize, beating Borussia Mönchengladbach in the UEFA Cup final and Leeds, forever the nearly men, were beaten in the Cup-Winners’ Cup final against AC Milan, just days after losing the FA Cup final to Sunderland.

In 1983-84, Liverpool won their fourth European Cup while Tottenham lifted their second UEFA Cup – both teams winning on penalties – and Manchester United were beaten in the last four of the Cup-Winners’ Cup by Juventus.

The all-domestic European final is not always welcomed by neutrals and must make UEFA wince a little – from a commercial perspective, two teams from the same league restricts the potential to leverage the occasion and as a spectacle, they lack that certain edge.

They have happened more often than people think – 17 times. The first all-domestic European final was in 1961-62 between Valencia and Barcelona in the Inter-Cities Fairs Cup. Barca also took place in the second, against Zaragoza in 1965-66 in the same competition. The UEFA Cup/Europa has provided nine, the first between Spurs and Wolves, but since then there were all-Italian affairs in 1990, 1991, 1995 and 1998. Two Spanish sides reached the final in 2007 and 2012 and there  was an all-Portuguese decider in 2011 between Porto and Braga. There was also a German shoot-out in 1980 between Frankfurt and Gladbach.

As for the Champions League, Liverpool versus Spurs will be the seventh occasion. The others:

With the current structure of the Champions League, the prospect of further local derbies in the competition is very real. Some people are desperate to see Real and Barca face-off in a final, but the romantics would prefer an unlikely team winning through. Already some pro-Arsenal pundits are claiming that Tottenham are the worst-ever Champions League finalist, but that’s unfair and a case of allowing local rivalry to colour the view of the writer.

Any team that slaloms their way through the competition deserves their place in the final. It’s a journey (everyone’s on a journey these days) that is laden with pitfalls and banana skins. So let’s enjoy the success of teams we see every week on the TV or in the flesh and cast aside petty rivalry and jealousy. In the past, football fans would, generally, get behind an English team if they were in a European tie. Actually, that is patriotism. When Liverpool won the European Cup in 1977, the first of their five wins and the first by an English club since 1968, most people were pleased. Healthy competiveness and appreciation of a remarkable feat by the opposition has all but disappeared in the modern world, the sentiment of “you’re with us or against us” seems to prevail in all walks of life. It goes back some years – in 1985, I applauded a young Mark Hughes when he scored for Manchester United at Stamford Bridge (it was a cracker and the applause was instinctive) and was clumped around the head by a fellow Chelsea supporter. I believe I can trace my neutrality and rational approach to football back to that moment.

I found it strange (and somewhat sad) that Arsenal fans, for instance, were positively sickened by the prospect of Tottenham reaching the Champions League final. Likewise, I see Chelsea fans’ continued hatred of Leeds as invalid, when the two clubs have not been in the same peer group for a couple of decades. More locally, a non-league club’s fans despising the local Football League club who once played in the same non-league division but have long moved out of the same universe. From the league club’s perspective, the non-leaguers don’t really exist any more.

Some would argue, given the facts and realities of modern football, that lending your support to Liverpool, Chelsea or Arsenal, in particular, is not necessarily getting behind an “English” club anymore. They may be domiciled in England, may play in the English league, may have an English name, but in truth, they are a product of our time and no more representative of a country than any of a dozen top clubs around continental Europe.