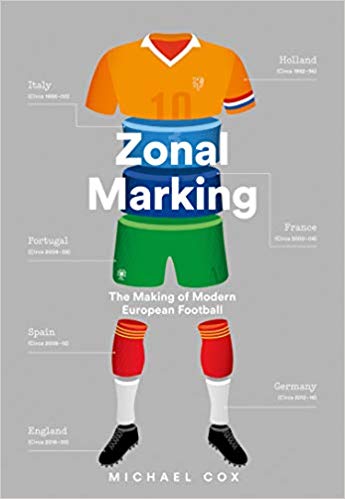 YOU could argue that Jonathan Wilson had the final word on football tactics, but if you want to know how European football got to where it is today, Michael Cox’s stage-by-stage story provides a different angle on whiteboard thinking.

Zonal Marking is an excellent read and is thought-provoking in the way the author views the transitional phases of European football. You may not agree with his take on the various moments in time when Portugal, Netherlands, Italy and others supposedly led the way, certainly I don’t think it was as clear-cut as Mr. Cox, but it is an interesting study nonetheless.

Until Spain took the helm in 2008-12, I personally believe football was drifting for a while. In hindsight, that wonderful thing, we could perhaps point to occasions where a certain country, coach or club was demonstrating an alternative approach, but in this day and age of multi-national teams, coached by foreigners, there is no “school”, no “movement” and only short-lived and tenuous trends.

This is in contrast to the past when we had the Danubian style, the Hungarians, Catenaccio, the Brazilians of 58-70 and Total Football. There seems precious little between many teams today and although there are tweaks and experiments, football remains a sport of mimicry and adapation.

There are some excellent anecdotes and insights. Fabio Capello, for example, reveals that Italian players see football as a job, not fun or a game. The book also suggests that Zinedine Zidane was only at his peak for a short period and by 2000 his best days were probably behind him. Comparisons with Michel Platini were inevitable and mostly Zidane was seen as trailing behind his predecessor. The story of how the young Cristiano Ronaldo came to prominence is also interesting, notably in that he was also being courted by Arsenal before Sir Alex Ferguson spirited him away to Manchester United. The one that got away.

Zonal Marking is an important addition to any football student’s library. Michael Cox has written an entertaining book that also demonstrates “just how much the international language of football can be shaped by a nation’s unique identity.”