THINGS haven’t gone particularly well for Hitchin Town this season, the first three games yielded just one point and a refashioned team was heavily beaten 5-0 at Alvechurch. Famously loyal, the fans have kept very quiet – there was a time when such a start to the season would have prompted calls for the manager to be sacked, but there’s no sign of #burkeyout among the sexagenarians that prowl the wooden terracing at the Fishponds Road end of the ground.

Non-league has always been a game of constantly moving toy soldiers, players coming in, moving out, playing the odd game and then finding a new club. Some clubs use 50-odd players a season, not generally successful ones, but the workforce is very transient. The Canaries team that reached two play-offs a couple of years back has all but broken up. The club got a lot out of Burke’s first team, but the question is, how many of the players he is currently fielding will be with the club in two, three or six months? The two best players on show were loanees.

On the evidence of game four against Rushall Olympic, a team that plays away from home in a very fetching “aquamarine”, Hitchin could be in for a tough season unless they find the experience that can bring some stability and savvy to their team. No shortage of enthusiasm or endeavour, and one or two players are clearly skilful, but it’s all largely harem scarem with no obvious pattern.

Hitchin are no strangers to putting out young teams – in the 1980s, they often had very inexperienced and raw sides, but this also coincided with a lean spell that lasted some years. Invariably, teams that go down this road are either idealistic or they’re short of money, Hitchin probably don’t fall into either category – they must surely have enjoyed a windfall in 2018-19 from a successful FA Cup run. The smart new dugouts and some much-needed work on the clubhouse roof would have accounted for some of that, but Hitchin appear to have moved on from claiming to be paupers. Most notably for those that care about these things, the media team has done a great job remodelling the press box! 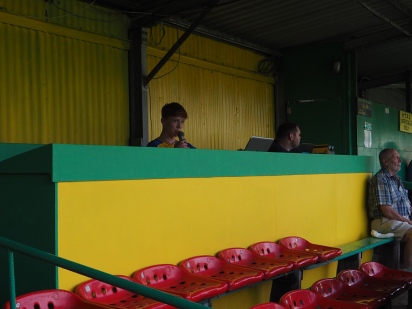 On the pitch, their current team is possibly the youngest they’ve ever had, certainly since the 1980s. Most truly successful teams are a well-constructed mix of youth and experience, but this Canaries squad is long on promise and short on achievement. Of course, there’s the impressive and dependable Dan Webb, but there are few who have any sort of CV. To add to the air of transition, Hitchin also lost their two best players in the summer in goalkeeper Michael Johnson and  winger-cum-midfielder Isaac Galliford, who went to Braintree and Hemel respectively.

It is doubtful anybody had heard of most of the new recruits before they arrived at Top Field, but Mark Burke brought back Brett Donnelly to add some zing to the dressing room. Now in the phyllosan stage of his playing career, Donnelly is a popular figure whose “run through a brick wall” approach is highly appreciated. He’s an honest broker of a player – you get what you see – and loves Hitchin Town. He is more representative of non-league of old rather than the academy outlet it is rapidly becoming.

Rushall arrived at an intensely heated Top Field in second place and unbeaten after three games. Although this was not the first time the clubs had met, Rushall is still a place people have trouble in identifying – “where is Rushall?” – although the slightly diluted Peaky Blinders accent of the visitors reveals it is in close proximity to Birmingham.

The game was fairly even in the first half, Hitchin energetic and creating some half chances, but you sensed Rushall had something in reserve – a predator waiting to pounce, perhaps. One player who caught the eye was Hitchin’s left back, Jordan Norville-Williams, who is currently on loan from Cambridge United. The 19 year-old’s composure set him apart from some of his less assured team-mates. Harry Draper, the force of nature signed on a season’s loan from Stevenage, also looked good.

Draper put Hitchin ahead from the penalty spot in the 62ndminute, a decision that looked debatable but compensated for an obvious handball just seconds earlier. Draper has scored all of Hitchin’s goals this season, underlining his obvious potential.

But it all changed suddenly, and there was a feeling that Rushall had decided to spring into action after going behind. Two quick goals, both raising question marks about the solidity of Hitchin’s defence, put Rushall in front – Levi Rowley and Jonathan Letford netting after 66 and 68. The game then went back to its familiar pattern, Rushall had done enough.

Hitchin tried to get back into the game, lots of possession and pressure, but the Rushall defence was sound. The 2-1 victory put them top of the table as leading scorers in the league, while Mark Burke’s side is one off the bottom. The Canaries looked crestfallen, especially the management team, but it is early days and Hitchin have been here before. No need for gallows to be constructed on the training pitch!