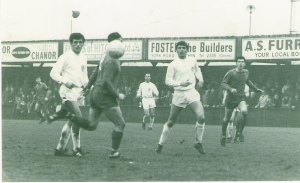 NON-LEAGUE football has its heroes and Hitchin Town lost one of its legendary figures this past week when it was announced Bernie Gogan had passed away. Gogan was a member of Hitchin’s 1968-69 team that finished runners-up in the Isthmian League. Hitchin had a very decent team in those days and Gogan, along with his striking partner Roy Cutler, were known as the “terrible twins”. Gogan was good in the air and it was while going up for a header that he sustained an eye injury that threatened his career back in 1969. His relationship with Cutler was, to quote both players, “almost telepathic” but it was also short-lived. Both flourished under Vince Burgess, the manager who led Wealdstone to FA Amateur Cup success in 1966. Hitchin acquiring players like Cutler and Gogan was a sign the club had become more ambitious and the 1968-69 campaign, along with the 1970 triumph in the London Senior Cup, justified this new approach. But it all ended too soon, starting with the departure of Burgess in 1970-71. Gogan scored 108 goals in 210 games and departed in May 1971 to Aylesbury. Cutler said of his striking partner: “Bernie was good in the air and I played off him. I would say we were very complementary.” Gogan was equally appreciative: “Roy read the game well and knew how to finish. We were on the same wavelength.”

MOST of the pre-season talk in Belgium involved the return of Vincent Kompany as player-manager of Anderlecht, along with Philippe Clement being employed once more by Brugge. These two clubs were favourites for the title as the competition kicked-off. Yet Kompany has not had an easy ride and has had to adjust his role in order to get through Anderlecht’s worst start to a season for 21 years.  The team currently sitting at the top of the Belgian First Division A is Standard Liège, who have made a very strong start and have scored 13 goals in five games. This coming weekend, Standard can underline their title credentials when they visit Anderlecht in Brussels. Standard haven’t won the Belgian title since 2008 and their status has certainly declined since the good old days of the 1970s when they were among Europe’s top 20 clubs. They’re currently managed by Michel Preud’homme who is in his third spell as Standard’s boss. Anderlecht v Standard is on September 1 – it will be worth looking out for this result.

IT WILL, almost certainly, be business as usual in the top five leagues this season. After a week in which the champions of England, Spain, Germany and France all failed to win, prompting some over-optimists to wonder if the tide might be turning, they all bounced back with wins and the fifth member of that group, Juventus, started the Serie A season with a 1-0 win at Parma. Leagues are not won by good fortune and the spirit of the cup tie, over a 38-game campaign, the best team will finish on top. The only people getting excited about a Barca defeat, a City draw and a Bayern blip are those that long for these clubs to slip up. Boring? Between 1975-76 and 1989-90, Liverpool won 10 of the 15 English titles. Now that was monotonous, but nobody talked of it being a drag! The last 15 titles have been more democratic, with Chelsea and Manchester United winning five and City four. In the 15-year stretch from the first Premier season of 1992-93, United won nine titles and Arsenal three. The fact is, the top division has always had periods of dominance: Aston Villa in the Victorian and Edwardian era, Arsenal in the 1930s, Liverpool and United in the 1960s, Liverpool in the aforementioned era, United in the 1990s and 2000s.

THE SAD story of Bury has opened up a can of worms about governance, transparency and the overall state of the nation’s football clubs. Certainly, the way Bury has been brought to the point of extinction does raise question marks against the future of small-town full-time professional football and once again, whether the English game, with its huge emphasis on glitz, glamour and big money, can sustain 92 clubs. The rise of the Premier has upped the ante for the rest of the footballing fraternity, even influencing aspirational and often foolish overspending in non-league football. Can these clubs sustain full-time football? We asked, via social media, if clubs in League One and Two should opt for part-time football? More than 70% said no, with 30% feeling that full-time may not represent the future. Given the Bury saga has raised questions about club ownership, we also asked what people felt was the ideal model for a club. Again, almost 70% were comfortable with supporter-owned clubs, but interestingly, around 20% were happy with their club being backed by a wealthy owner. Very few (7%) were in favour of clubs being publicly-owned. The relevant figure is that 20% – clearly, despite all the pitfalls, the prospect of success on the back of a benefactor is still too much to resist.