In search of Willie, the Giant Custodian

ANYONE who knows anything about the early history of Association Football will have heard of the name Willie Foulke. At 24-stone, Foulke, who played in goal for Sheffield United, Chelsea and Bradford City, and made a fleeting appearance for England, holds the record for the heaviest professional footballer in Britain, if not the world.

I came across some ancient, although surprisingly clear, footage of Willie Foulke in action for Sheffield United from 1901 and 1902. He’s a big lad, desperately hoisting his trousers up as he commands the United penalty area. But he also looked surprisingly nimble for such a “big unit”. When I found this film, I immediately felt I had stumbled across an old friend, almost a long lost relative.

Why would this leviathan of a footballer, the giant custodian of early industrial football, strike such a chord with me? We date back more than 30 years, Willie and me, our acquaintance starting in the British Newspaper Library in Colindale and later cemented in the overgrown cemeteries of Sheffield. Over two raid-sodden weekends in the steel city, overlooking it in fact, my friend – a dedicated Yorkshireman – and I tramped every major graveyard to find Willie Foulke’s final resting place. When we finally located him, we cavorted with joy around his grave, as if apeing a scene from Macbeth. Quite what the grieving old lady, placing a bunch of flowers on a relative’s plot nearby, thought of this is anyone’s guess.

As we took the Corporation Bus back to the city centre, we reflected on our two-week search, which had also attempted to pinpoint the pub in Matilda Street (close to his old club) where Willie played “mine host”. Sadly, most traces of the big fellow, even in the early 1980s, had long since been eradicated from Sheffield, but in the archives of the sporting nation, Willie Foulke continued to lives on.

So what of this imposing figure? He started life in Dawley, Shropshire, of debatable parentage, and moved to Derbyshire where he worked as a miner at Blackwell Colliery. He played for the local village side and it was in a Derbyshire Cup tie at Ilkeston that he was spotted by Sheffield United, then one of the leading lights in English football. They paid the colliery team the grand sum of £20 for his services. That was in 1894, a year before the colliery was hit by an underground explosion that killed several miners. Blackwell Colliery’s other claim to fame was as the workplace of one Percy Topliss, the WWI mutineer who became the subject of a TV dramatization, The Monocled Mutineer.

Foulke, however, was an instant success at Bramall Lane. He was, admittedly, playing among some of the finest players of the age, including Ernest “Nudger” Needham, one of the pre-eminent footballers of the Victorian era.  Foulke went straight into the United team. Interestingly, one of his rivals for the goalkeeper’s position (there was no such thing as a goalie’s jersey in those days, everyone wore the same shirt), was one Arthur Wharton, the first black player to appear in the Football League.

Looking through the pages of The Athletic News and The Sportsman, the well-read sporting press of the time, tales of Foulke proliferate. Although he was tall, but not quite as wide as he would become, in his early years, he was nevertheless formidable. As the waistband expanded, Foulke-bating became a popular pastime, on and off the pitch. One opponent, George Allan of Liverpool, had a running battle with Foulke in a league game in 1898, resulting in Foulke turned him upside down in his temper. Allan, who played briefly for Scotland, died a year later of tuberculosis. There are countless other stories of a similar nature, including this one in the man’s own words: “There is another story about an Everton forward, Bell, who had threatened me. They will tell you how I got the best of him by bowling him over, then rubbing his nose in the mud, and picking him up with one hand to give him to his trainer to be cared for.” 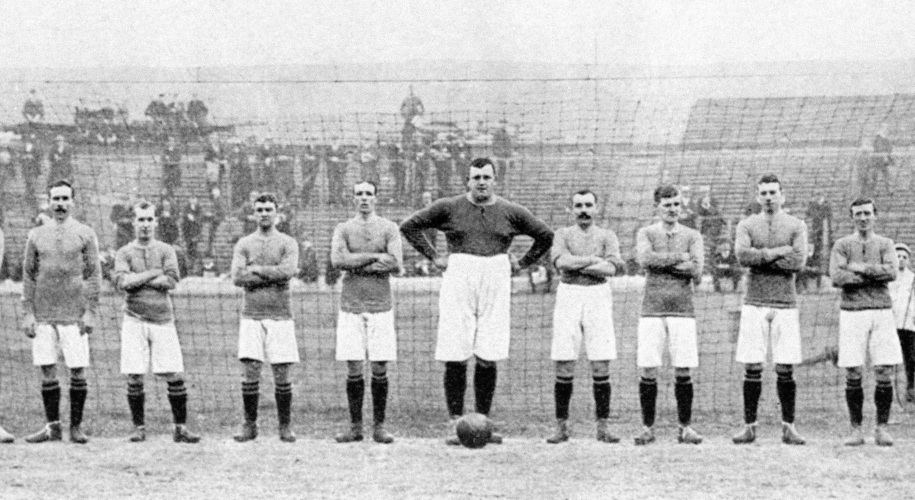 Foulke’s reign at Bramall Lane was mostly successful. He was the almost ever present for the next four years, keeping goal in his side’s Championship winning team of 1897-98, and a year later, won the FA Cup as United beat Derby (Steve Bloomer and all) 4-1 at the Crystal Palace.  It was after the presentation that Foulke told A.J. Balfour, the Prime Minister of the day, that he was not doing a good job as Premier.

In 1901, Foulke was on the other end of a shock FA Cup final defeat by non-league Tottenham, but in 1902, the cup was won again. Sheffield United were held to a 1-1 draw at Crystal Palace, the Saints scoring two minutes from time in controversial fashion. Foulke was so incensed that he left the dressing room soaking wet and naked and pursued the referee. Mr Kirkham feared for his life as he saw the 20 stone custodian charge down the corridor and sought refuge in a broom cupboard. But for the intervention of FA officials, Foulke would have torn the door off to discuss the matter with Kirkham. Sheffield United won the replay by 2-1.

After 11 seasons with United, Foulke was lured to London in 1905 by newly-formed Chelsea. They were assembling an all-star squad of players [sounds familiar] and he was seen as the sort of headline-maker that would help attract customers. They were not wrong, but despite a jolly time attending the music halls of the Fulham area, Foulke hankered for the north. He didn’t quite see out the 1905-06 campaign at Stamford Bridge and went to Bradford City for a swansong season.

In a career that spanned 13 seasons and 350-odd appearances, plus one for England in 1897, Foulke was one of the instantly-recognisable figures of the Victorian and Edwardian sporting world. Little wonder that he’s never been forgotten. And he also played cricket!

After his playing days were over, like so many footballers of his generation, his life revolved around public houses and gambling. He died on May 1, 1916 at the age of 42. Cause of death, “a fatty heart” and “cirrhosis”. Needless to say, he died in poverty.

It’s a story with a sad ending, but my own relationship with Willie Foulke also has a less than satisfactory conclusion. I wrote most of a biography on the great man and even had a brief article published in a magazine. A few months later, I saw the same article, word-for-word, published in a Sheffield paper by a journalist who had blatantly plagarised the article. Then when my synopsis was sent off to various publishers: “The Giant Custodian”, I received a letter from one publisher stating that they had received a similar manuscript from a Sheffield journalist on the same subject and as he was a friend, they would publish his book. There was not room for two, I thought.

Over 25 years later, a book did finally emerge, although not by the “well known journalist”. Foulke has stayed with me, however, and an old Victorian photo of him, bought from a junk shop in the mid-1980s for £5, adorns one of my walls at home.