It may be game over, now City should go all-out for the Champions League

IF YOU believe the misguided narrative, Pep Guardiola and Barcelona won the UEFA Champions League every season. Those that know, know differently. Pep has not won the competition for eight years, nine if he fails to do so this season. After Manchester City were soundly beaten by Liverpool at Anfield, Guardiola and his entourage may just decide to concentrate fully on lifting that enormous and impressive trophy.

It is still far too early to call time on the title race, but Liverpool are nine points ahead of fourth-placed City and eight in front of Leicester City and Chelsea in second and third respectively. It’s a big gap at this stage of the season and even now, it is hard to see anyone making up that lost ground.

City may have peaked with their current team, which won the treble last season in England in style. The world of Guardiola is an intense one, you often hear of his obsession with detail, his refusal to entertain anything other than his approach and the insistence on devotion to the “Guardiola way”. For two seasons, City have had one thorn in their side – Jürgen Klopp’s Liverpool.

Klopp’s style is a high-octane pressing game, a strategy that must exhaust his players as much as its wears-out the crowd! It makes City uncomfortable, a team that rarely gets pressured as much as it does at Anfield. Three times in the past couple of years, City have been taken apart in front of Liverpool’s baying audience. They have failed to learn from the experience of their Champions League debacle in 2018.

For some reason, City struggle to perform at Anfield, notably Raheem Sterling, who receives non-stop abuse from start to finish. Liverpool fans have refused to forgive Sterling for moving to City, largely because of his behaviour in refusing to sign a new contract. At the same time, Liverpool were quite happy to benefit from a similar outcome with Virgil van Dijk, who played-up at his former club Southampton in order to finesse a move. Double standards? Some clubs welcome their former players, while others consider it a betrayal when they move on. Liverpool received around £ 50 million for Sterling, a nice turnaround on a £ 600,000 signing.

Sterling wasn’t alone in being out-of-sorts, for City’s defence was abysmal at times and clearly suffered a crisis of confidence with 36 year-old stand-in keeper Claudio Bravo sitting behind them. A club as wealthy as City should not have player shortages, not with a squad that’s worth something like £ 1.2 billion. They can also afford a strong second choice goalkeeper. 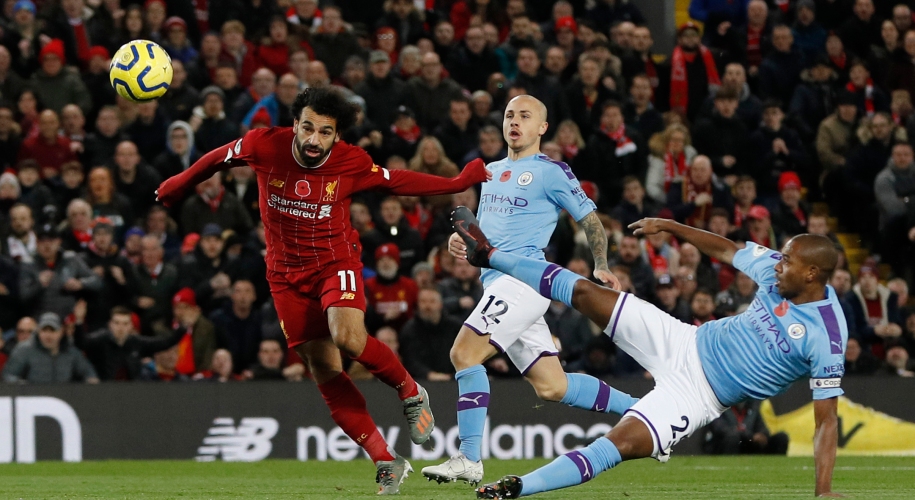 Mohamed Salah of Liverpool scores the second goal during the Premier League match at Anfield, Liverpool.

It was an afternoon where Klopp’s immaculate dentistry was on display all too frequently as he grinned his way through the 90 minutes. His team was outstanding but City also played some excellent football. Guardiola, desperately trying to give the impression the defeat had not bothered him, spoke after the game of his team’s brilliant display. “We showed why we are champions,” he insisted. But they have now lost three times in the Premier League, last season they lost four in 38 games. Something has obviously changed, be it physical, mental or it could just be that the planets have become misaligned.

Is it time for Pep to – at least in his own mind – write-off a third successive title win? The Champions League this season could be the most open in many years, as it was last season. Consider that quite a few of the contenders are going through a period of transition, probably the first time there seems to state of flux at most of the main clubs – Bayern Munich, Real Madrid, Barcelona, for example. Juventus may be about to have some issues with Cristiano Ronaldo and Paris Saint-Germain still haven’t resolved their Neymar problems. It’s up for grabs, as they say.

It’s not easy to win the league title and Champions League. Of the English winners of the latter, Liverpool in the old European Cup days won both in 1977 and 1984. Since becoming the Champions League, Manchester United in 1999 and 2008 have achieved that double. In a league where there are clearly two outstanding teams that will surely be fighting-out the Premier race, to win both competitions is going to be doubly difficult.

City have found the Champions League laden with obstacles. The past two seasons, they have lost to English clubs, perhaps surprisingly. In 2016-17, they were also favourites to beat Monaco in the round of 16, but clumsily went out of the competition. They’ve also lost to Real Madrid and Barcelona, who went on to win the trophy.

Total focus on the Champions League could prove to be the best option this season. After all, how do you motivate a team to keep winning the Premier when qualification for the Champions League is almost guaranteed year-in, year-out? The best team in Europe doesn’t always win the Champions League, sometimes it can come to a team that just happens to be fortunate, in the right place at the right time and focused. Were Real Madrid the best in Europe when they won it in 2014, 2016, 2017 and 2018? Were Liverpool the best in 2019? There certainly hasn’t been a Barca 2011 side in recent years.

And City need that trophy to anoint their success in the past six or seven seasons. Guardiola needs that triumph to cement his position as the guru of football coaches worldwide. Only one club in England seems to have stumbled across the secret elixir of periodical European success in the major competition – Liverpool. Not even Manchester United have that connection with the Champions League. Manchester City’s next step should be concentrating all their efforts, all their riches, on lifting the trophy that has eluded them. They really have not gone close to achieving that goal and that must surely irritate not just their coach, but also the men from the Middle East. The Premier League can be won again next year or the year after, but to be seen as a force for the continent, City have to be crowned European champions in Istanbul on May 30, 2020.