BBC RADIO FIVE has selected its all-time England XI and the results are, perhaps predictably, a little influenced by “presentism”. This is what makes the fun exercise of picking “best ever” teams somewhat flawed – the past is often so deeply buried that the merits of ancient players often get forgotten.

You’ve also got to consider that different eras create contrasting styles of football and that the bustling Edwardian goalscorer cannot possibly be compared to a soft-shoed Premier-era striker. Also, in an age of intense media and marketing where the boundaries between myth and reality are blurred, those that make the most noise are not necessarily the best players.

England have only been World Champions once, it’s an accolade that may never be bestowed upon the nation again. The cynics and critics called them “wingless wonders”, a dull and functional side that was built for one purpose. One of the youngest members of that team, Alan Ball, told me – with just a little bitterness – just before he died that Sir Alf Ramsey and the team of 1966 was never given the credit it deserved.

True, host status was used to good effect, but nobody can deny that England deserved their triumph. The host nation usually did well – in 1930, 1934, 1966, 1974 and 1978 the home team emerged victorious. The BBC included three members of the team that won in 1966 – 603 games ago – and added the missing Jimmy Greaves for good measure.

My first England game was in 1968-69 when they faced Bulgaria at Wembley. “Welcome to Sir Alf Ramsey’s World Champions” said the programme. Only four members of the 1966 team were included, Bobby Moore, Bobby Charlton, Geoff Hurst and Martin Peters. Sad to say, I never saw Greaves play in the flesh and by the time I was interested in football, his England career was over – his final cap being won in May 1967. For the next couple of years, “Greaves for England” was a popular call from the Tottenham crowd, but the fire was on its way out and in 1970 he was transferred to West Ham for his Football League swansong. 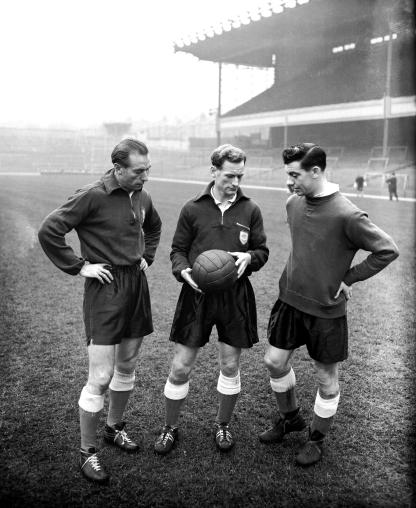 The 1970s almost get overlooked when people talk about England. True, after the Mexico World Cup, the country went into hibernation until 1982, losing out in two World Cups and receiving a wake-up call that took years to take notice of. Yet there were some good players that never got their chance to play on the very highest stage – Colin Todd, Roy McFarland and Tony Currie to name but three, and Kevin Keegan and Trevor Brooking only played 26 and 27 minutes respectively in 1982.

Interestingly, the BBC had David Beckham, Bobby Charlton and the tragi-commedy that is Paul Gascoigne in a three-man midfield. Charlton, of 66 fame, is a natural choice, Gazza, for his sublime skill is also a natural for inclusion, but Beckham is less obvious. The media-savvy Beckham represented an era – one of under performance and maximum hype – and he carried England at times with his superb dead-ball execution. But Bryan Robson, one of the best midfielders of the pre-Premier era, also carried his country.

Beckham is one of four players from that so-called “golden generation” that achieved nothing very significant for England.  They were medal collectors at club level, they played lots of games, because England play a lot more fixtures than they did in the past. Invariably, they returned home from a competition early, tails between their legs and bemoaning the fact that a “world class” squad just hadn’t performed. Again.

As for strikers, as well as Greaves, BBC regulars Gary Lineker and Alan Shearer were included. No place for Geoff Hurst (“he had his moment” – pretty big moment), Tommy Lawton, Steve Bloomer, Kevin Keegan (like Robson, he had the fate on the nation on his shoulders), Vivien Woodward, George Camsell and Nat Lofthouse. Tom Finney and Stanley Matthews were nowhere to be seen. The current striking hero, Harry Kane, may eventually earn a place, especially if he scores more goals against better quality opposition.

The issue of current players racking-up appearances and goals is that while in the old days, England used friendlies as a benchmark of their relative strength, today the exhaustive qualifying process, with dozens of very weak countries, has consigned many games to opportunities for Goliath to trounce David. Like the multitude of friendlies, qualifying competitions don’t provide the right sort of test. England often only play full strength top-line opposition when they get to a major tournament – and that’s when the problems begin. Even in the early stages of the finals, the opposition can be unchallenging.

It is all too easy to forget the past as too long ago and in a simpler, less professional time, and equally simple to discard the present day as not having “earned its spurs”. The players that roll off the tongue from the archives do so because they have been ingrained in the boy’s own tale that is football history. Those that grew up with the crudely doctored illustrations of Ted Ditchburn, Stanley Mortensen and Jackie Milburn, knew about Ted Drake, Steve Bloomer and Billy Meredith because of football’s baton-passing folklore. Equally, the current generation of new fans will learn of Gazza, Waddle, Lineker and Beardsley only through their reputations and YouTube footage.

At the moment, England’s prospects are better than they’ve been for a while and let’s be frank, some very average players have won England caps over the past 20 years. Hype aside, there’s stability and a system that’s easily interpreted by the fans. There’s also a safe and decent hand on the tiller. Getting to the next stage will be difficult, but international football has never been as easy as people think, hence the English culture of over-expectation that only really got extinguished in recent times when we finally realised there were problems to be solved.