EVERYBODY has changed at Crewe at some point in their lives, or at least, that’s the popular myth. It was once one of the key railway hubs of Britain, the point where train lines intersected. At one stage, the railways employed thousands of people, more than 10% of the local population. It’s no real surprise that Crewe Alexandra’s Gresty Road stadium is among the closest to a train station, sitting adjacent to railway property and overlooked by an office block known as Rail House. Apparently, you cannot travel from any part of town towards the centre without passing under or over a railway bridge.

From a footballing perspective, Crewe Alexandra is one of those romantic names that once proliferated lower league football, evoking images of flat caps, rattles and cups of Bovril. The beanie hat has succeeded the flat cap, despite a renaissance in natty headgear by order of the Peaky Blinders, and rattles are nowhere to be seen, but Bovril is still on sale at Gresty Road.

In the past, the ground had wooden terraces courtesy of the nearby railway works, who provided chunky sleepers for the fans to stand on. Today, Gresty Road is as modern as it is possible for a small, homely club to be, neat stands all round with a giant structure that overhangs the rest of the ground and indeed, stands almost alone on the Crewe landscape. No smoking chimneys in this corner of the north, the horizon is strictly low level.

Crewe’s history is a modest one. They reached the FA Cup semi-finals in 1888, losing 4-0 to then-mighty Preston North End and they’ve had a few seasons playing in the second level of English football. Above all, they’ve been known as a club that develops young players and hence, they’ve got a state-of-the-art training facility. “Bloody Premier class,” insisted a long-standing Crewe fan when explaining that the ethos established by Dario Gradi has continued at the club. 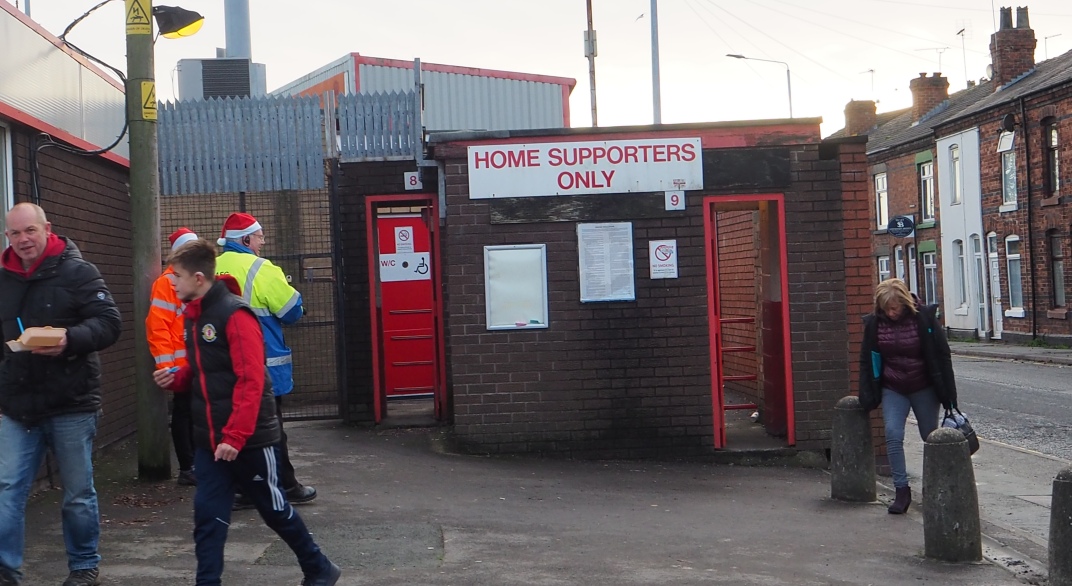 There was a time when Crewe was seen as a role model for small-town football clubs in finding their place in the modern football structure. Gradi, an excellent mentor, brought through a number of players who won international honours. David Platt, for example, was released by Manchester United as a youngster but made his name with Crewe under Gradi’s management. Geoff Thomas was nurtured by Crewe before joining Crystal Palace, winning nine England caps. Liverpool signed Rob Jones from Crewe for £ 300,000 and he was also honoured by England. There are others who came through the Crewe system.

Prior to the arrival of Gradi in 1983, Crewe were perennial strugglers and were forced to apply for re-election to the Football League 10 times between 1956 and 1983. “Without Dario, I’m sure we would have become a non-league club,” says Nigel, who has supported Crewe since 1967. “He had some good ideas and wanted to build the club up.”

Crewe became one of the most admired clubs in English football, not just because of their ability to develop talent, but also for a distinctive style of play. Gradi was a disciple of Dave Sexton, the former Chelsea, Manchester United and QPR manager. In fact, the Italian-born former schoolteacher, who was an accomplished amateur footballer in his youth, was appointed assistant coach at Chelsea at the age of 29 in 1971.

Gradi is no longer at Crewe after retiring in October 2019. Sadly, his name became somewhat tarnished by recent sex scandal enquiries although nobody will have a bad word said about him. “This is effectively Dario’s club, we owe him plenty,” said one Crewe loyalist.

Gradi stepped down as manager in November 2011 after four separate spells that included 1,359 games. Since then, Crewe have had just two managers, rather unique in today’s football world but arguably a sign of the underlying stability at the club. The current manager, Dave Artell, a no-nonsense character who was described as a classic lower-league central defender, has been in the job since January 2017. “This is a club that has a reputation for being sensible, one that tries to live within its means at all times and not make rash decisions,” said Nigel.

That must be a tough task, for one glance around Gresty Road tells you life is very different at this end of the English game. For a start, there’s an absence of global brands and international companies. In the club shop, porridge oats are on show, an indication of the type of sponsor the club attracts. Mornflake, a company that mills high quality oats, is based in Crewe. Then there’s the Whitby Morrison works, a Crewe company that makes Ice Cream Vans. There’s no Emirates Airlines, Chevrolet or BMW-type company looking to attach themselves to clubs like Crewe. “Money goes to money. These are local firms who have shown their loyalty to the club.”

But then, a town like Crewe loses people to the big guns every weekend. Manchester (United and City) is 36 miles away, Liverpool 48 miles and Stoke-on-Trent just an 18-mile journey. Crewe has a population of 72,000 and with nearby Nantwich, has a combined total of around 90,000. The Crewe & Nantwich political constituency was heavily featured in the media during the recent general election because it was deemed to be a “marginal” seat. Crewe is predominantly a working class town, but Nantwich is an aspirational place with strong Conservative links, so the constituency is somewhat torn. Like many similar areas – Crewe and Nantwich voted to leave the European Union to the tune of 60% – the electorate voted Tory.

With a 70,000 population, Crewe Alexandra are drawing around 5% of it to Gresty Road, not a bad percentage. Their average gate in 2018-19 was 3,762 but earlier in the 21st century, they were attracting between six and seven thousand. The usual gate is around 4,000 this season, a campaign that has started reasonably well.

Crewe’s team is a tribute to their youth system. Against Mansfield Town on December 14, 10 of the 14 players fielded were 23 or under. Eight were home grown and four were free transfers. One player, Chuma Anene is on loan from Denmark’s FC Midtjylland. Experience comes in the form of the much-travelled Nicky Hunt (36) and Eddie Nolan (31). 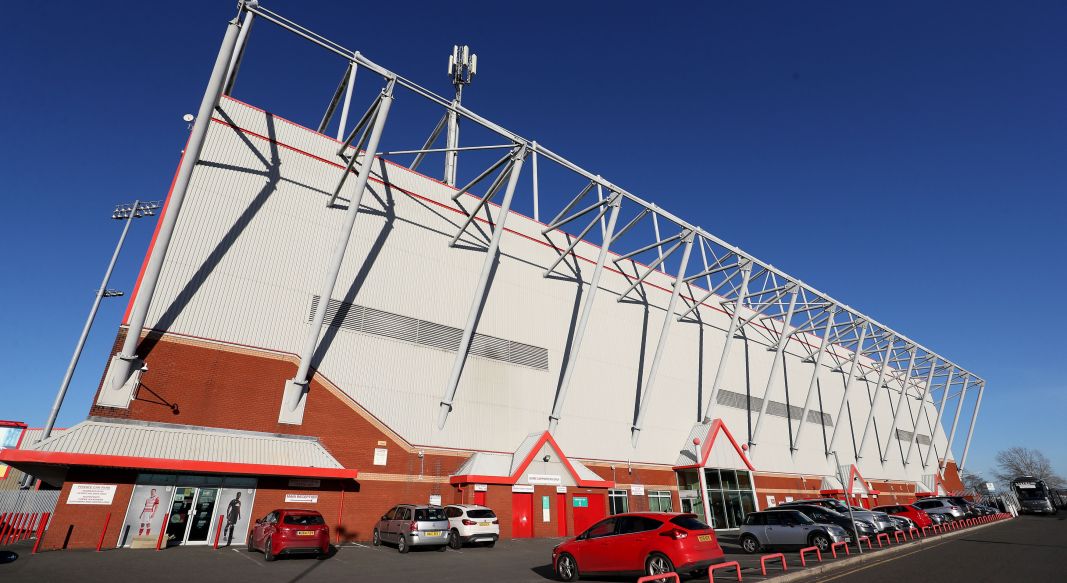 A general view outside of the Alexandra Stadium, Gresty Road, Crewe.

Crewe fans like Nigel anticipate that Tom Lowery will be the next major sale for the club. He’s just 21 years old and a relatively slight player, but he is very skilful. He’s started the season well as Crewe have forced their way up the league table. Their home form has been good and they’ve already won five times away from home. The Mansfield game ended 1-1, but was a lively and entertaining 90 minutes. Anene opened the scoring after eight minutes but a nicely taken goal by Mansfield’s Andy Cook drew the visitors level. Both teams missed several chances in both halves. Crewe were without their leading scorer Chris Porter, another experienced hand (36 years old) who has averaged a goal every three games for Crewe.

Gresty Road seems to have a healthy atmosphere where expectation is realistic and people have real pride in their club. Make no mistake, though, clubs like Crewe are in the survival game. They need to generate income from selling talent higher up the food chain in order to keep going. Their turnover in 2017-18, for example was just £ 4 million – compare that to clubs like Manchester United and the huge imbalances in the English game are very visible, and indeed, worrying. The situation at Bury, along with the recent news about the financial position of Championship clubs, was a reminder that the 92-club structure is under constant pressure. Yet we need clubs like Crewe, Accrington, Rochdale and Scunthorpe to exist, we need an eco-system that is financially robust. If nothing else, we need the likes of Crewe Alexandra to remind us there is another way.